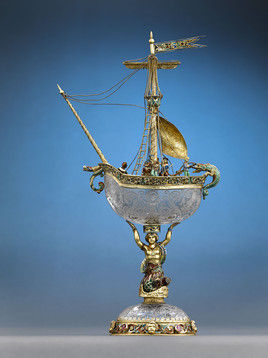 A tour de force of Viennese rock crystal, this splendid nef exhibits the hallmarks of a master goldsmith, jeweler, enamelist and sculptor. Mounted entirely in gilt silver, the ship is suspended by a mermaid perched atop a carved rock crystal, enameled, and bejeweled base. From the ship's ties, the diminutive sailors, and even the menacing sea serpent which is rendered with awe-inspiring precision, the vessel bears the most intricate workmanship.

The nef is an ornate table ornament in the shape of a ship that dates back to the Middle Ages, with the earliest known mention occurring in 11th-century France. Its name coming from the Frenchnickname for a popular ocean sailingship,the vessel wasmost likelyinitally used as a sort of goblet for drinking. As the form evolved,however,it became an elaborate dining accessory crafted of precious metals and stones and used to hold valuable items such as salt and other spices and condiments. In fact, many point to the nef as the precursor to the epergne.

Discovered thousands of years ago, rock crystal, or natural quartz, has been cherished for its natural beauty and remarkable ability to refract light. When cut and polished, the inherent striations and inclusions of the crystal create a reflection of light far more brilliant than man-made crystal or glass. The scarcity of this crystallized quartz, however, has limited its use and for thousands of years glass makers have sought to imitate its luminous qualities. It was particularly prized during the 18th and 19th centuries, when it was considered one of the most precious and expensive materials used in the decorative arts.