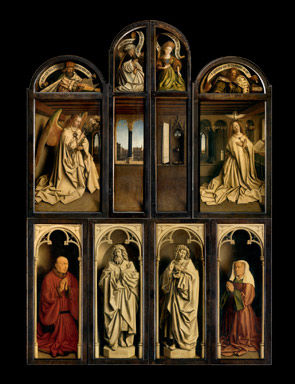 LOS ANGELES, CA.- It is now possible to zoom into the intricate, breathtaking details of one of the most important works of art in the world, thanks to a newly completed website focused on the Ghent Altarpiece.

A stunning and highly complex painting composed of separate oak panels, The Mystic Lamb of 1432 by Hubert and Jan van Eyck, known as the Ghent Altarpiece, recently underwent much-needed emergency conservation within the Villa Chapel in St. Bavo Cathedral in Ghent. As part of this work, the altarpiece was removed from its glass enclosure and temporarily dismantled—a rare event which also made it possible to undertake a comprehensive examination and documentation, supported by the Getty Foundation in Los Angeles.

Each centimeter of the altarpiece was scrutinized and professionally photographed at extremely high resolution in both regular and infrared light. The photographs were then digitally “stitched” together to create highly detailed images which allow for study of the painting at unprecedented microscopic levels. The website itself contains 100 billion pixels.

Thanks to a grant from the Getty Foundation, these high-definition digital images are now available on an interactive digital website, “Closer to Van Eyck: Rediscovering the Ghent Altarpiece” at http://closertovaneyck.kikirpa.be where, for the first time in the Ghent Altarpiece’s history, viewers may peek under the work’s paint surfaces by means of infrared reflectography (IRR) and x-radiography to study the van Eycks’ genius in unparalleled microscopic magnification. Taken together, this body of documentation represents an invaluable archive for scholars, conservators, and art lovers worldwide.

“This imaging project provides an amazing level of access to the wondrous painting of the Ghent Altarpiece,” said Deborah Marrow, director of the Getty Foundation. “It has been a privilege to work with such a distinguished team of international colleagues on this important project.”

Led by Ron Spronk, a Professor of Art History at Queen’s University in Kingston, Ontario and at Radboud University in Nijmegen, the Netherlands, the website is a collaborative project of the Royal Institute for Cultural Heritage (KIK/IRPA), Lukasweb, and the Vrije Universiteit Brussel, and is funded through support from the Getty Foundation and with support from the Nederlandse Organisatie voor Wetenschappelijk Onderzoek (Netherlands Organization for Scientific Research, or NWO).

“The images on the website will aid art historians studying the Ghent Altarpiece and Hubert and Jan van Eyck for many years to come,” said Spronk. “The site gives scholars access to research materials of a unique and unprecedented quality, both on and below the paint surface of the polyptych. We deliberately chose an open-source approach to the images, with the hope that it will spur more projects using interactive, high-resolution imaging techniques for the technical study of works of art.”

The website features overall photographs of the polyptych in its opened and closed positions, and from there users can zoom closer into the details of individual panels of the altarpiece, down to a microscopic level. Scrolling and zooming features are guided by a thumbnail image to indicate the location and size of the detail on the altarpiece. Users are also able to open two windows simultaneously to compare any two images from the site, enabling viewers to interactively study the Ghent Altarpiece and the artists’ techniques in ways that have never before been possible.

Belgium's internationally recognized federal scientific institution KIK/IRPA, with core activities in the fields of technical documentation, conservation and restoration, scientific research, and archiving, will host the website on its high-capacity servers.

“After L'Agneau Mystique au Laboratoire, the first important publication about the historical and technical research on the Ghent Altarpiece by our founding director Dr. Paul Coremans in 1953, this website is the next logical step in the dissemination of scientific information about the polyptych,” KIK/IRPA’s Interim Director Christina Ceulemans said. “It will also be an ideal instrument for the restorers during the comprehensive conservation/restoration campaign which will start in September 2012.”

The new website marks the culmination of several Foundation grants supporting conservation planning, examination and training related to the Ghent Altarpiece as part of the Getty’s Panel Paintings Initiative. Paintings on wood panel from the late 12th through the 17th centuries are among the most significant works in American, European, and Russian museum collections, yet there are only a handful of experts fully qualified to conserve these paintings. The Getty Foundation, Getty Conservation Institute, and J. Paul Getty Museum together designed the Panel Paintings Initiative to ensure that the next generation of conservators is trained before the current experts retire.

The Ghent Altarpiece documentation and website grants bring the total amount awarded by the Getty Foundation since 2008 through the Panel Paintings Initiative to more than $2.5 million. The initiative started with a needs assessment survey of significant collections of panel paintings and of professionals in the field, which the Foundation has used as a road map to develop training residencies. Recent projects in partnership with organizations such as the Metropolitan Museum of Art, the Prado Museum, the Opificio delle Pietre Dure in Florence, the University of Cambridge’s Hamilton Kerr Institute, and the Royal Museums of Fine Arts Belgium have created training opportunities through the treatment of highly significant panel paintings, including a upcoming three-year Getty-funded training program at the Prado. 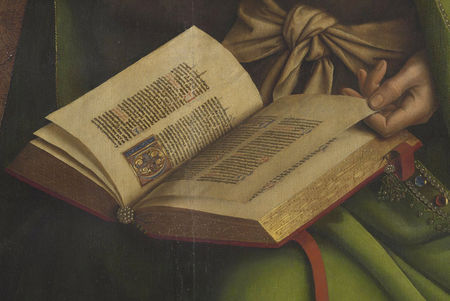