"Nomads and Networks: The Ancient Art and Culture of Kazakhstan" @ the Institute for the Study of the Ancient World at New York

"Nomads and Networks: The Ancient Art and Culture of Kazakhstan" @ the Institute for the Study of the Ancient World at New York 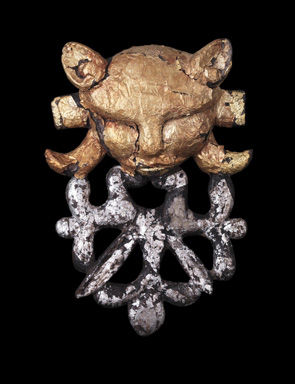 NEW YORK, NY.- The first U.S. exhibition devoted entirely to the nomadic culture of ancient Kazakhstan opens on March 7, 2012, at the Institute for the Study of the Ancient World at New York University (ISAW). Nomads and Networks: The Ancient Art and Culture of Kazakhstan focuses on the people of the Altai and Tianshan Mountain regions, located in the eastern part of the country, from roughly the eighth to first centuries BCE. With nearly 250 objects, the exhibition dispels the notion that nomadic societies were less developed than sedentary ones. Rather, they are revealed to have been highly sophisticated, with strategic migratory routes and active networks of communication and cultural exchange with their neighbors. The exhibition remains on view through June 3, 2012.

The objects in Nomads and Networks are all on loan from Kazakhstan’s four national museums, and most of them are on view in this country for the first time. They range from bronze openwork stands, superbly decorated with animal and human figures; to petroglyphs that marked important places in the landscape; to dazzling gold adornments that signified the social status of those who wore them. A highlight is recently excavated, never-displayed material from a fourth–third century elite burial site in Berel, near the Russian/Chinese border, where permafrost conditions enabled the preservation of organic materials. The exhibition contains some 120 artifacts from this rich site. 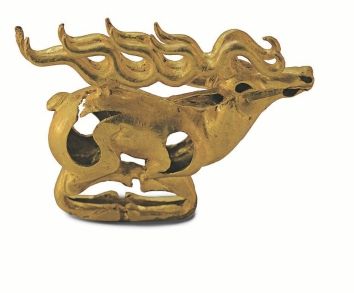 SAW Exhibitions Director and Chief Curator Jennifer Chi states, “ISAW is thrilled to present Nomads and Networks: The Ancient Art and Culture of Kazakhstan. Each of the great diversity of objects in the exhibition sheds light on the lives and beliefs of the nomadic people of the Altai and Tianshan Mountains in the Iron Age. The exhibition is organized to tell a vivid and illuminating story of nomadic life, its distinct patterns of movement, and the ways in which artifacts reflect this. ISAW is grateful to the Kazakh Ministry of Culture and Information, and to His Excellency Erlan Idrissov, Ambassador of the Republic of Kazakhstan to the United States, for his unstinting commitment to the realization of the exhibition.”

Ambassador Idrissov adds, “As it marks the twentieth anniversary of its independence, the Republic of Kazakhstan is delighted to share these treasures of its rich cultural heritage with audiences in the United States. The creation of Nomads and Networks has entailed an exemplary collaboration among the Embassy of the Republic of Kazakhstan to the United States, the Institute for the Study of the Ancient World, and four of Kazakhstan’s national collections. Such cooperation is a powerful tool for the advancement of intercultural understanding, and I am delighted to have participated in this project. On behalf of my country, I offer thanks to ISAW for initiating this important exhibition.” 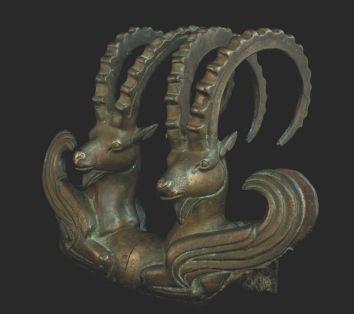 For at least three millennia, nomadic society, with its movement along carefully determined migratory routes, shaped the cultural landscape of the Eurasian steppe. In southern and eastern Kazakhstan, including the Alti and Tianshan regions, these routes frequently combined lowland pastures, used in the winter, and alpine highlands, occupied in the summer, forming a sustainable system of land-use for the animals on which the nomads relied for food, wool, and hides. In the summer, nomads formed themselves into small herding groups, sometimes comprising only a single family, while in the late autumn and winter the herding groups assembled into larger camps and engaged in raiding and social rituals that revived larger communal identities.

Nomads and Networks focuses on a form of Eurasian nomadism in which horse riding warfare practiced by an elite played a central role. This did not fully develop until the Iron Age, at which point it spread across the Eurasian steppe, yielding the magnificent material culture on display in the exhibition.

Nomads and Networks begins with a display of spectacular, superbly preserved finds from Berel, an elite burial site of the Pazyryk culture located near the border with Russia, Mongolia, and China. Each burial at the site contained at least one horse, and sometimes many more, and the exhibition illuminates the central role of the animal in Pazyryk culture. With a focus on recently excavated artifacts, this portion of the exhibition includes numerous items devoted to the elaborate ornamentation of the horse, a deliberately transformative practice that surely had ritual purposes. On view are expertly carved appliqués in wood—once overlaid in gold and tin—that belonged to a set of horse tack; two superb sets of wooden horns that, together with several wooden appliqués, are installed to demonstrate the complete decoration of a horse; a bridle ornamented with plaques that have been carved with real or mythical animals and floral elements; a saddle with superbly embroidered and appliquéd felt, and much more. Other objects seen here illuminate Pazyryk burial customs. These include a wooden pillow that was used to support the head of the deceased, and carved boar-tusk elements The second section of the exhibition opens with a representative selection of petroglyphs, or images carved on rock-face. Indications of the nomads’ deep connection to the natural world, such carvings once embellished the nomadic landscape, most likely demarcating sacred places. The examples on view depict a variety of themes, from animals the nomads would have encountered, to scenes of chariots drawn by horses, perhaps referring to mythical or cosmic beliefs. Other items, such as a plaque in the form of a fish and belt ornaments representing boars, demonstrate the integral role of land- and water animals to nomadic life and belief systems.

While their role in nomadic society is not fully understood, massive bronze cauldrons like the examples in the exhibition may have been used in ritual communal meals held in the winter encampments. However, the meaning of the exhibition’s five elaborately decorated bronze stands is more enigmatic, as their decoration is highly varied in style and content. They were found at scattered spots across the landscape, perhaps suggesting that they, too, were placed at sacred locations. 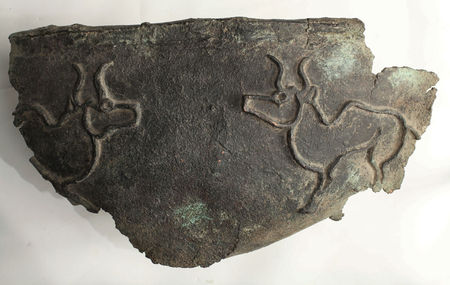 It was through exchange and interactions with their sedentary neighbors that the nomads of the Tianshan and Altai were able to acquire valuable luxury goods. These not only served as markers of prestige that distinguished powerful individuals within the community, but also influenced the artistic vocabularies used in objects produced by the nomads themselves. Nomads and Networks includes several examples of this cultural and aesthetic interaction, with two particularly spectacular examples: the Zhalauli treasure and the Kargaly diadem.

The Zhalauli treasure comprises thirteen gold objects of personal adornment. While the function of some of the pieces is unknown, the eight teardrop-shaped ornaments in the exhibition clearly decorated a belt, and their overall composition and decoration fuse indigenous and foreign—perhaps Western—tastes.

The Kargaly diadem, a superb openwork piece with figural and landscape imagery, articulated through the inlay of precious stones, shows a similar mixing of form and content, but here the imagery is drawn directly from Chinese celestial iconography. The diadem also indicates that some of the adornment worn by the nomadic elite must have been striking in its radiance. 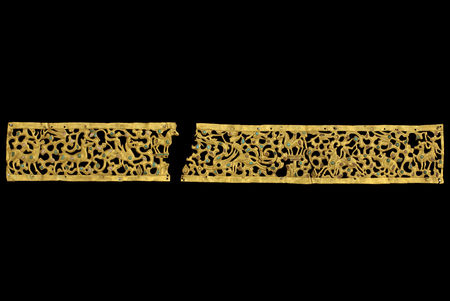 Commentaires sur "Nomads and Networks: The Ancient Art and Culture of Kazakhstan" @ the Institute for the Study of the Ancient World at New York