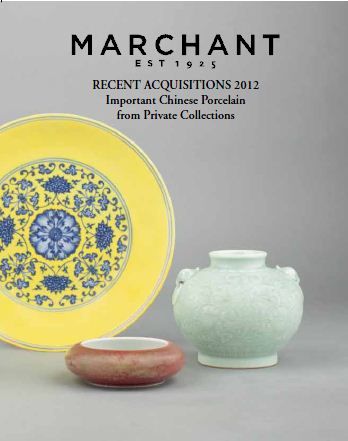 Marchant are delighted to announce the exhibition and sale of “Recent Acquisitions 2012”, a fine selection of fifty three pieces of Chinese porcelain to be shown in their gallery at 120 Kensington Church Street.

Recent Acquisitions 2012 is the 13th in the series started in 2000, and contains a range of Chinese porcelain that is of Chinese taste and with exceptional provenance. We have been able to source from old clients many of these outstanding pieces. This justifies our belief that at the present time and for the foreseeable future, there is a dominant Chinese market.

The dust jacket on the front of this catalogue displays 5 such pieces.

No.1 The Yuan Qingbai ewer and cover, from the Meiyintang Collection, can bare the adjective rare, justifiable as it is one of only three known, written about and examined by famous experts and dealers since 1956. Its acquisition would grace any collection or museum. the pear-shaped body applied in the centre with a pair of relief phoenix birds in flight with open wings and long tail feathers above a wide moulded lappet band with ruyi-heads, beneath bands of applied stylised beads with further lappets and scrolls on a jewelled ground at the neck, all between a dragon-fish handle supporting a loop on his head and a tubular curved spout rising from the mouth of a bearded dragon and joined to the neck with an openwork strut; the domed ogee cover surmounted by a seated Buddhist lion wearing a bell on its collar and holding a brocade ball under its left paw in front of a corresponding small loop to join the handle, covered overall in a luminous pale blue translucent glaze pooling in the recessed areas and the edges of the applied decoration, the underside of the body and cover revealing the unglazed biscuit, partially burned orange in the firing.

• Previously sold by John Sparks. • Illustrated by John Ayers in his paper, Some Characteristic Wares of the Yuan Dynasty, 7th March 1956, Transactions of The Oriental Ceramic Society, Volume 29, fig. 17, pl. 38. • Illustrated by Margaret Medley in Yuan Porcelain and Stoneware, London, 1974, pl. 10. • Formerly in the collection of Otto Doering, Snr. • Exhibited at The Art Institute of Chicago. • Sold by Christie’s New York in their auction of Important Chinese Ceramics, Jades and Works of Art, 9th November 1978, no. 125, when sold for US $286,000.

• Illustrated by Anthony Du Boulay in Christie’s Pictorial History of Chinese Ceramics, colour page 110. • Included by J.J. Lally & Co., in their exhibition of Chinese Porcelain and Silver in the Song Dynasty, Spring 2002, no. 30, where the author notes “this ewer, which is the only recorded example of such large size and elaborate design, shows the skilful application of several new techniques of porcelain decoration invented at the Yuan imperial kilns in the period before painting and underglaze blue became the dominant decorative style”. • Included by Regina Krahl in Chinese Ceramics from the Meiyintang Collection, Volume Four (I), no. 1614, pp. 28-9. • Sold by Sotheby’s Hong Kong in their auction of The Meiyintang Collection, Part I, 7th April 2011, no. 39, pp. 164-7.

• A similar example without a cover, in The Tokyo National Museum, is illustrated by Tsugio Mikami in Sekai Toji Zenshu, Volume 13, colour pl. 42, p. 60; another version was among the porcelains recovered from a shipwreck off Shinan, Korea, which can be dated to 1323; that ewer has a similar phoenix design in relief but is lacking any applied motifs and has a plain spout, handle and cover and is illustrated by the National Museum of Korea in their catalogue of Special Exhibition of Cultural Relics Found off the Sinan Coast, 1977, no. 163; a further similar ewer and cover is illustrated by Liu Liang-yu in A Survey of Chinese Ceramics, Volume 3, p. 214. • A pair of meiping vases with covers of this group, excavated from a tomb of 1324 in Wannian County, near Nanjing, Jiangxi Province, is published in Wenwu, 1977, no. 4, pl. 9, fig. 5.

No.3 The Xuande blue and white tankard, formerly belonged to Edward T. Chow and J.M. Hu, two of the most important collectors of the 20th century. With a counterpart in the National Palace Museum, Taiwan, one could say ‘highly desirable’. The remaining three pieces are all from the collection of T.Y. Chao, one of the most highly respected Hong Kong collectors of recent times. A Chinese imperial porcelain blue and white tankard. 5 1⁄8 inches 13.1 cm high. Six-character mark of Xuande in a single line and of the period, 1426-1435. Photo Marchant

of middle-eastern metal work form, painted on the body in a continuousflower scroll with alternating lotus and hibiscus blooms, buds and stylised leaves between petal borders and beneath a single rib and grooved band of upright petals on the cylindrical neck with evenly spaced blue speckles on the rim; the loop-shaped handle with projecting knob painted with a classic scroll and aster flowerhead on the ruyi-shaped strap.

• An identical tankard in The National Palace Museum, Taiwan, is illustrated in Blue and White Ware of the Ming Dynasty, book II part I, plate 20, pp. 60-1 with four colour illustrations; another in the Qing Court Collection, Beijing, is illustrated in The Complete Collection of Treasures of the Palace Museum, Blue and White Porcelain with Underglaze Red (I) no. 121, pp. 128-9;another, formerly in the collection of Mrs Rachel Wright Segelin was sold by Sotheby’s London in their auction of Fine Oriental Ceramics and Works of Art, 20th February 1968, no. 88, pp. 34-5. • Two tankards of this design from the Chinese Imperial Collection, both displayed on wood stands, are depicted on the handscroll Guwantu (Pictures of Antiques) dated 1729, in the Victoria and Albert Museum, London, and illustrated by Evelyn S. Rawski and Jessica Rawson in China, The Three Emperors, 1662-1795, no. 169, pp. 254-5.

• The origin of this form goes back to the 8th century in the Middle East and is discussed by John Pope in Chinese Porcelains from the Ardebil Shrine, p. 88, who mentions a carved crystal jug from Egypt, and two examples from the Caucasus in glass illustrated by Lamb in Mittelalterliche Gläser und Steinschnittarbeiten aus dem Nahern Osten, vol. 2, pl. 2, no. 15, pl. 8, no. 10, and pl. 80, no. 6; earlier Persian prototypes are also known; a 10th-11th century jug from eastern Iran as well as two 15th century examples are illustrated by A.S. Melikian-Chirvani in Islamic Metalwork from the Iranian World, 8th-18th centuries, nos. 8, 109 and 113; a further Iranian gilt metal silver inlaid tankard of similar form in the British Museum (OA 1969.6-20.1) dated 1484 is illustrated by Feng Xianming in Yongle and Xuande Blue and White Porcelain in the Palace Museum, published by Orientations in their selected articles volume on Chinese Ceramics, 1982-1998, fig. 5a, p. 174.

No.12 An imperial peachbloom brush washer tangluo xi, is one of the prescribed forms from the famous set and exhibited twice in Hong Kong. A Chinese imperial porcelain peachbloom brushwasher, tangluo xi. 4 1⁄2 inches, 11.5 cm diameter at widest point. The base with a six-character mark of Kangxi in underglaze blue and of the period, 1662-1722. Photo Marchant

of compressed globular form, covered on the exterior with a gently mottled mushroom pink and pale crushed strawberry red glaze, mottling to slightly lighter patches with green flecks at the widest point, the interior, inner rim and base glazed white.

• From the T.Y. Chao Family Trust Collection no. 50. • Included in the exhibition of Ch’ing Porcelain from the Wah Kwong Collection, Chinese University of Hong Kong, 1973, no. 10. • Included by the Min Chiu Society in their exhibition of Monochrome Ceramics, Hong Kong Museum of Art, 1977, no. 11.

• Included in the exhibition of Ming and Ch’ing from the Collection of the T.Y. Chao Family Foundation, Hong Kong Museum of Art, 1978, no. 53. • Sold by Sotheby’s Hong Kong in their auction of The T.Y. Chao Private and Family Trust Collections of Important Chinese Ceramics and Jade Carvings: Part II, 19th May 1987, no. 292, purchased by Marchant.

• Formerly in a European Private Collection.

• A similar example, formerly in the collection of Emily Norwood Trevor, was included by Marchant in their Recent Acquisitions catalogue 2008, no. 29, p. 68-9; a further example, from the collection of Professor Edward T. Hall, was included by Marchant in their exhibition of Imperial Porcelain of Kangxi, Yongzheng and Qianlong, 1996, no. 4, p. 16.

• A bright peachbloom example formerly in the collection of Edward T. Chow was included by Marchant in their Recent Acquisitions catalogue 2009, no. 30, pp. 52-3.

• This type of brushwasher is known as tangluo xi as its compressed globular form can be compared to a gong. The form belongs to the group of eight prescribed shapes ba da ma made for the scholars desk or the emperors writing table. A complete set in the Metropolitan Museum of Art, New York, is illustrated by Sue Valenstein, in The Handbook of Chinese Ceramics, p. 237.

No.24 The imperial Yongzheng yellow and blue saucer dish, one of the most attractive colour combinations fulfilling to perfection the desired result and No.41 The celadon carved imperial vase, Qianlong mark and period also from the Goldschmidt collection, can be described as beautiful. Its clarity of colour, quality of carving, grace and perfection make it a joy to touch and behold.

A full colour hardback illustrated catalogue of the collection is available, priced £50 plus postage.