Up to snuff: Success at the Chinese snuff bottle auction @ Bonhams in New York

Up to snuff: Success at the Chinese snuff bottle auction @ Bonhams in New York NEW YORK, NY.- The Bonhams Fine Chinese Snuff Bottles auction took place this morning, selling 98% by value and realizing a sale total of $1,022,900, more than twice the pre-sale low estimate. The auction was comprised of 170 lots, drawn primarily from three private collections: The Collection of Dr. Martin Roshco, The Collection of Mrs. Fay Plohn and The Collection of Dr. Edward A. Kopinitz. The compelling array of shapes, material, subject matter and fine provenance throughout the sale generated interest among new and seasoned buyers, with more than 90% of the lots finding buyers.

Amber snuff bottles performed extraordinarily well, claiming two spots among the top 10 lots of the sale, including the highest-selling lot. The top lot was a honey-hued amber snuff bottle, carved with an intricate basket weave pattern, selling for $64,900 (pre-sale est. $18,000-$25,000).

Of compressed globular form, with a flat lip, and a small circular foot rim surrounding a concave foot, the interior very well-hollowed, the exterior with a rounded band at the base of the neck, and an evenly carved basket weave pattern. 2 3/8in (6cm) high. Sold for US$64,900

Note: This bottle is nearly identical to the one illustrated in Robert Kleiner, Chinese Snuff Bottles, the White Wings Collection #154, p. 222. Well-hollowed, the exterior of the bottle carved to imitate a leafy cabbage with an insect, the foot subdivided into three sections, the amber an even honey color. 2 1/2in (6.5cm) high. Sold for US$23,750

The second highest-claiming lot was a glass snuff bottle from the Imperial Beijing Palace workshops. Selling for $45,000, this double gourd form bottle was carved with the characters "Da Ji" (Great Auspiciousness) (pre-sale est. $10,000-$15,000) and proved buyers' continued interest in objects produced under the aegis or the Qianlong emperor (reign 1736-1796). Of compressed double gourd form, with a flat lip and a concave foot, the interior extremely well-hollowed, the exterior sides carved with floral motifs, the front and back both carved with the characters da ji 'Great Auspiciousness.' 2 1/2in (6.6cm) high. Sold for US$45,000

A popular decorative motif in Chinese material culture, the double gourd carries allusions to longevity as a hollowed gourd would be worn by a figure carrying the elixir of immortality. Double gourds were also a frequently used form for snuff bottles and the skill of interior hollowing would challenge even the most talented craftsman. This bottle is exceptionally well-hollowed, with the interior matching the exterior form. 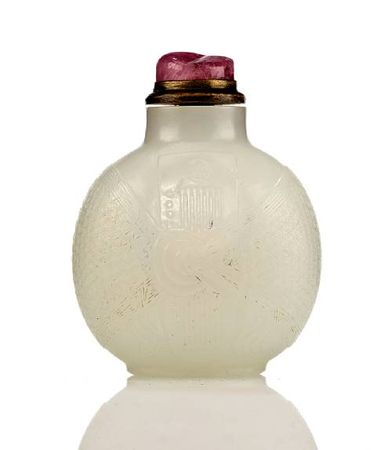 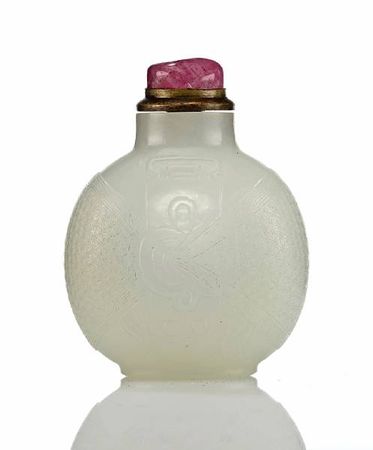 Of compressed globular form, flat lip, its rounded oval foot rim surrounding a recessed foot, the interior very well-hollowed, the exterior carved as a brocade wrapped qin, the front of the instrument visible on one side of the bottle and the back of the instrument on the reverse, the wrapping cloth with a repeating petal diaper motif and a leiwen border, a seal script six-character Qianlong mark to the base. 2 1/8in (5.3cm) high - Sold for US$31,250

A nearly identically designed white jade snuff bottle in the Bloch collection is illustrated in Moss, Graham and Tsang, A Treasury of Chinese Snuff Bottles, The Mary and George Bloch Collection, vol.1 no 27. A second 'wrapped qin' bottle in white jade, of a different shape, is illustrated in Humphrey Hui The Imperial Connection, no. 62 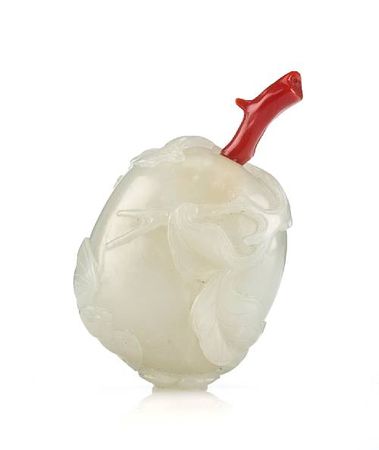 The interior well-hollowed, the exterior carved with a bat, a leafy branch, a blossom and the exposed seeds of the fruit, the translucent stone speckled with icy white inclusions. 1 3/4in (4.6cm) high - Sold for US$31,250 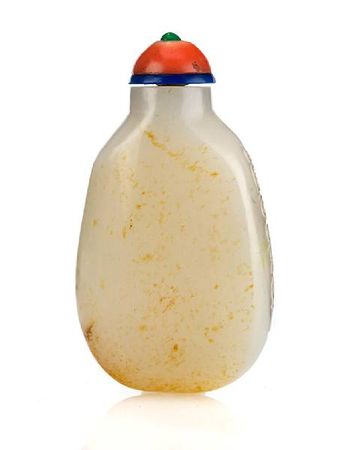 Of natural pebble form with a flat lip, the white jade displaying a light russet skin on three sides, the fourth side carved in relief with four seal-script characters reading xuxin ying wu (a modest image.), 2 3/8in (5.9cm) high. Sold for US$25,000

Property of Dr. Edward A. Kopinitz

The four characters inscribed are 虛心影物. 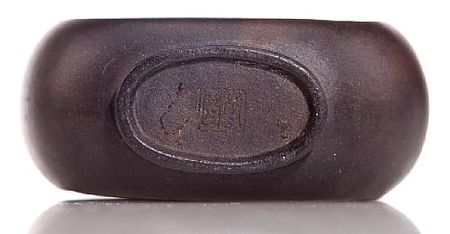 Of rounded rectangular form, with a cylindrical neck and flat lip, and tapering to a recessed foot surrounded by an oval foot rim, reserved on each side with a recessed panel, finely carved and decorated in white slip, on one side a moonlit landscape with a pavilion, and on the other a bat and blossoming branch, the foot with an incised inscription reading Qianlong in seal script. 2 1/2in (6.5cm) high - Sold for US$32,500

It is likely that this bottle belongs to those that were produced by "The Slip Master". For more on this artist and his snuff bottles and teapots which corroborate his producing works for the Imperial Court see Moss, Graham and Tsang, A Treasury of Chinese Snuff Bottles, The Mary and George Bloch Collection, vol.6 pp 941-945. 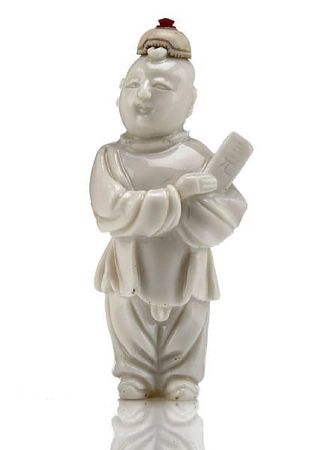 Of figural form, of a young scholar, with an opening at the crown of his head, his arms cradling a tablet reading san yuan(a reference to successfully passing all levels of the imperial examinations) with flowing robes, his feet unglazed. 3in (7.5cm) high. Sold for US$31,250

See Robert Kleiner, Treasures from the Sanctum of Enlightened Respect, vol 1, for the only other known bottle in Dehua ware. Of flattened baluster form, with a gilt metal lip and flat gilt metal foot, with an everted mouth rim and leiwenband around the neck, the body carved with a continuous landscape with a figure holding a lingzhi on one side reversed by two seated figures. 2 1/8in (5.7cm) high - Sold for US$25,000

This auction followed acclaimed sales of the Linda Riddell Hoffman and Margaret Polak collections of Chinese snuff bottles offered by Bonhams in New York in March of 2010 and March of 2011. These sales, combined with today's results and the sales of the Mary & George Bloch Collection in the Bonhams Hong Kong galleries, have firmly established Bonhams as the premier auction house for Chinese snuff bottles among connoisseurs and collectors worldwide, with record prices being set for the top lots.

For the sale's full auction results and a calendar of upcoming auction and events, please visit www.bonhams.com.

Commentaires sur Up to snuff: Success at the Chinese snuff bottle auction @ Bonhams in New York