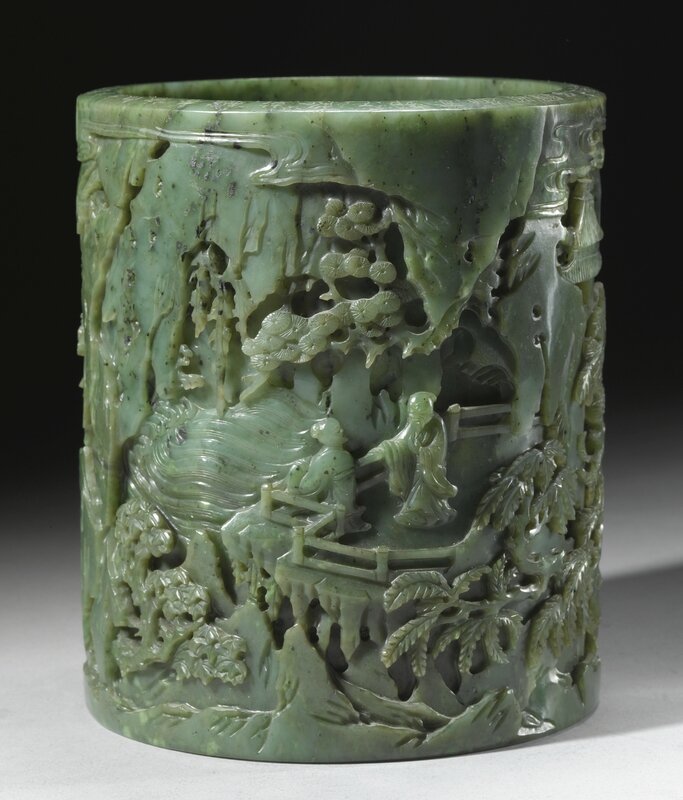 the thick walls deeply carved and undercut around the exterior with a wondrous waterscape depicting two immortals and their attendant in two rafts returning from a herb gathering trip, two sages standing on a terrace overlooking the swiftly flowing waters, the entire scene punctuated with fantastic rocks and luxuriant trees creating a lush atmosphere, the characters yun bu fei ling (a cascade of clouds permeating the grove) inscribed on a rock, the top of the mouthrim incised with a twenty-eight character inscription from a Qianlong poem, followed by the date, Qianlong yimao xia yuti (imperially inscribed by Qianlong during the summer of the yimao year) and the seal, hui xin bu yuan (the heart's delights are never far), the mottled spinach green stone with paler moss-green and cream-colored areas, suffused with black striations and pinpoint inclusions, wood stand (2). Height 6 in., 15.2 cm. NOTE: The present brushpot is inscribed with four lines from a poem titled Ti Hetian yu yun pu fei ling bitong, recorded in the Yuzhi shiji (Imperial Poetry Collection), compiled in the Siku quanshu (Library of the Four Treasuries), fifth collection, (wuji), juan 97:12a. The inscription is dated Qianlong yimao xia (summer of 1795) and can be translated as follows:

Here common craft abandons its trade,
becomes erudite in antiquity,
And becomes a waterfall scene
on this brushpot.
The lattice lookout seems set
as if in seven-syllable verse,
Which could only be Taibai's
song of Censer Peak.

The Qianlong emperor may have written the above poem while visiting the picturesque waterfall of Xianglu Peak, one of the four peaks, at Lu Mountain in Jiangxi province. He recalls the well-known poem by Li Bai (699-762) titled Wang Lushan pubu (Gazing at the Lushan Waterfall) in which Li praises the beauty of the cascading water. It is known that the Qianlong emperor possessed a superior connoisseurship of jade and insisted on examining every piece presented to him, which he categorized according to shape, color, quality and style. On many occasions, such as that seen on this brushpot, his response to jade carvings inspired poetic compositions, which was then inscribed on to the vessel. This superbly carved brushpot exemplifies the zenith of pictorial carving achieved by the craftsmen working during the Qianlong period. Despite the restricted size and challenging nature of the material, the artist has successfully captured a sense of depth through the substantial undercutting of the overhanging rocks and trees while employing the traditional method of depicting vast space through the stacking of objects in the foreground in the lower sections of the brushpot to the billowing clouds at the top. The breadth of textures, from the pine needles to the flowing lines of the water, is harmoniously balanced through the smoothly polished surfaces of the rocks and carefully modeled heads of the figures in the round. Such variation of carving further accentuates the rich hues of the jade stone and exhibits the remarkable skill of the craftsman.

This piece belongs to a group of brushpots similarly carved with scenes of scholars and immortals in landscapes and incised with an imperial poem around the top of the rim and the title of the work on a boulder. An example dated to 1795, but of the spring season and with varying scenes and poetic inscriptions, in the Palace Museum, Beijing, is illustrated in The Complete Collection of Treasures of the Palace Museum. Jadeware (III), Hong Kong, 1995, pl. 169. Two brushpots also dated to 1795, carved with closely related scenes and inscribed with the same poem and title are known, one sold in our London rooms, 28th October 1988, lot 306, and again in our Hong Kong rooms, 31st October 2004, lot 229, and the other from the Alan and Simone Hartman collection, sold at Christie's Lond on, 13th June 1990, lot 425, and again at Christie's Hong Kong, 28th November 2006, lot 114. Compare also two brushpots of this type in the National Palace Museum, Taipei, included in the exhibition The Refined Taste of the Emperor. Special Exhibition of Archaic and Pictorial Jades of the Ch'ing Court, National Palace Museum, Taipei, 1997, cat. nos 55 and 56; and another sold in these rooms, 19th March 2007, lot 50.