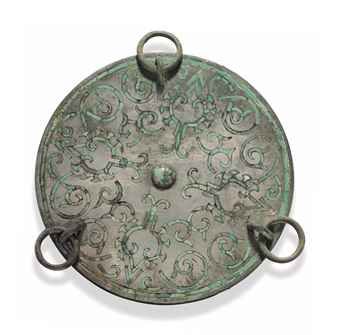 Notes: Unlike most mirrors of Warring States to Tang dynasty date, which have a central loop or knob for the attachment of a cord, this mirror and others like it have loops at the outer edge, which are thought to have been used for suspending the mirror. A turquoise-inlaid bronze mirror found in 1965 in a Western Han tomb at the Sanlidun site in Lianshui county, Jiangsu province, was unearthed with a bronze figure of a recumbent deer, suggesting that the mirror might have been suspended by two of the rings from the antlers. For illustrations of the deer and mirror see,Ancient Bronze Mirrors from the Shanghai Museum, Shanghai, 2005, p. 59, fig. 13. Another turquoise-inlaid mirror, also with three rings, excavated at Linzi (a city of the Qi state), Shandong province, is illustrated in Zhongguo Qingtongqi Quanji - 16 - Bronze Mirrors, Beijing, 1998, p. 32, no. 32, and again by T. Lawton, Chinese Art of the Warring States Period; Change and Continuity, 480-222 B.C., Freer Gallery of Art, 1982, p. 81, where it is noted that other mirrors with suspension loops at the rim were excavated from a tomb at Shiertai, Chaoyang county, Liaoning province.