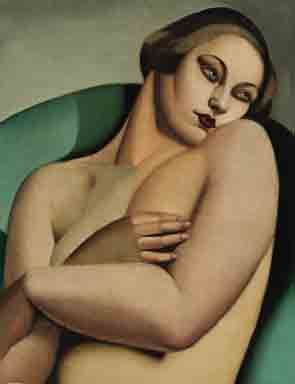 NEW YORK, NY.- On the evening of 2 May 2012 in New York, a major work by the modern artist Tamara de Lempicka, thought to be lost since the 1920s and only recently brought to light, will be offered in Sotheby’s sale of Impressionist & Modern Art. Nu adossé I is a classic example of the artist’s elegant and sensuous aesthetic and was included in her groundbreaking solo exhibition at Milan's Bottegia di Poesia gallery in 1925, the same year it was painted. Following that exhibition, the painting effectively disappeared from view until Sotheby’s was contacted by the owner late last year. The work will be shown in London, prior to exhibition and sale in New York this spring, and is estimated at $3/5 million*.

Tamara de Lempicka was a pioneering artist who occupied an important position in ‘Roaring Twenties’ Paris. Her aesthetic embodied the spirit of the Art Deco era and its sense of style and modernity. When she completed the present work in 1925, she was just establishing herself as a painter of serious consideration. The exhibition at Bottegia di Poesia gallery in Milan effectively launched her career as a formidable presence among the avantgarde, and the pictures on display there, including the present work, as well as Le Modele and Portrait de la Duchesse de la Salle (sold by Sotheby’s in May 2009), are now considered some of the most successful compositions of her career.

The whereabouts of Nu adossé I have been unknown for most of its recorded history. The catalogue raisonné for the artist, published in 1999, included an image of the present work taken at the Milan exhibition in 1925, and listed it as “location unknown.” Last year, Sotheby's was contacted by the West Coastbased owner of the painting. He described finding the work many years before and, while not realizing its importance at the time, he had appreciated its aesthetic appeal and kept it in his home. It was a decade later, after the owner learned that he possibly owned an original Lempicka, that an art consultant advised him to contact Sotheby’s. Following first-hand inspection and subsequent research, the work was confirmed to be the lost Lempicka. The exciting discovery of this painting fills an important art historical gap in the artist’s work.

Nu adossé I is appearing on the market at a time of unprecedented interest in the artist. Over the course of the past year, several new benchmarks have been set for Lempicka’s work at Sotheby’s – in June 2011, a new auction record was set for the artist when her La dormeuse sold for $6.6 million. Five months later, that record was broken again at Sotheby’s when Le rêve achieved $8.5 million