"Aphrodite and the Gods of Love" @ Getty Villa

"Aphrodite and the Gods of Love" @ Getty Villa “We are thrilled to have worked collaboratively with our colleagues at the Museum of Fine Arts, Boston to present this first U.S. museum exhibition devoted to Aphrodite, which includes many important works from the collections of both museums as well as from Italian institutions,” says David Bomford, acting director of the J. Paul Getty Museum. “This exhibition is an opportunity for a broader examination of the goddess, a favored subject of J. Paul Getty himself.” David Saunders, assistant curator of antiquities at the J. Paul Getty Museum and curator of the exhibition at the Getty adds, “This exhibition goes beyond the conventional preconceptions of Aphrodite as simply the goddess of love. It reveals other sides of her that deserve attention—her role as a protectress in certain cities, for example, or her care for sailors and merchants. Furthermore, we demonstrate that she was not always benevolent. There are numerous cases in which she and Eros manipulate the desires of both men and gods.” The exhibition begins with Aphrodite as we expect her—nude, beautiful, and seductive. Her naked body was first depicted by the Greek sculptor Praxiteles around 350 B.C., and his sensational cult statue for her temple at Knidos (in present-day Turkey)—now lost— proved enormously influential. In the exhibition, sculptures showing Aphrodite bathing and dressing herself represent the major variations of the female nude. In addition, perfume vessels, storage jars, and mirrors demonstrate how the goddess served as a model for women in their boudoirs and baths. 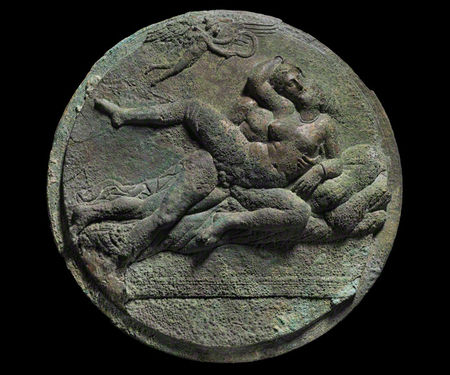 Mirror with women bathing before a statue of Aphrodite on a pillar, The J. Paul Getty Museum, 110-117.

Having outlined what is familiar about Aphrodite, the exhibition turns to lesser known themes. First is the vexed question of her origins. She was not native to early Greek religion but evolved over centuries, influenced by a variety of Near Eastern goddesses associated with power, fertility, and war. Figurines from Cyprus and the Near East dating as far back as the third millennium B.C. are used to explore the complex story of the goddess’s genesis. The next section of the exhibition looks at Aphrodite’s involvement in affairs of the heart, most notably in the mythical Judgment of Paris, when she offered Helen, queen of Sparta, as her prize. Aphrodite was hardly a model wife herself, and the child of her liaison with Hermes was Hermaphroditos, represented in the exhibition by the magnificent sculpture of the Sleeping Hermaphrodite from the Palazzo Massimo in Rome. The fickle nature of Aphrodite’s companion, and in some sources, son, Eros is also explored in this section. He is a child who toys with lovers, and is often described in ancient texts as capricious and troublesome. Many of the depictions of Eros in the exhibition reinforce this notion. One terracotta statue portrays him as a young boy wearing a lion-skin, just like Herakles. The combination looks endearing, but conveys how powerful and potentially destructive desire can be. The final section of the exhibition focuses on Aphrodite’s worship, using material from sites such as Athens, Cyprus, Naukratis, and Aphrodisias to examine the identity of her devotees, the kinds of offerings they made, and regional cults. On display only at the Getty Villa are votive offerings from Aphrodite’s sanctuary at the Etruscan port of Gravisca. These demonstrate her importance to merchants, for her powers over the sea meant that she could permit smooth-sailing for travelers. At the center of this section stands the Capua Venus, an over life-size Roman statue discovered in the amphitheater at Capua. This imposing figure originally held a shield, a symbol of Aphrodite’s much-debated martial nature. The statue also looks forward to the final section of the exhibition—the similarities and differences between the Greek goddess, and Venus, her Roman counterpart. Water Jar with Aphrodite and Adonis, Greek, 425–400 B.C. Terracotta, 18 1/2 in. high. Museo Archeologico Nazionale di Firenze (Soprintendenza per i Beni Archeologici della Toscana). Reproduced with permission of the Ministry of Heritage and Culture. Superintendence for Archaeological Heritage of Tuscany 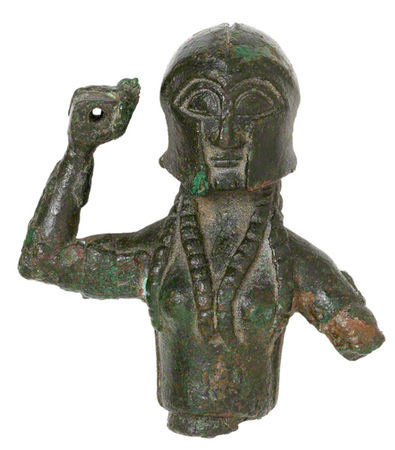 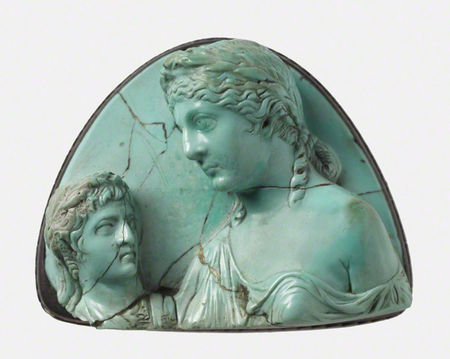 Commentaires sur "Aphrodite and the Gods of Love" @ Getty Villa