Ivan Konstantinovich Aivazovsky (Russian, 1917-1900), View of Constantinople and the Bosphorus, oil on canvas is estimated at £1.2-1.8 million. Photo: Sotheby's.

LONDON.-Sotheby's Orientalist Sale will take place in London on Tuesday, 24 April 2012. Showcasing paintings, drawings and sculpture depicting Turkey, the Middle East, and North Africa, the auction will be led by masterpieces by the Russian artist Ivan Aivazovsky and the Turkish painter and polymath Osman Hamdy Bey. Comprising 33 lots, the sale is estimated to bring in excess of £6 million.*

Claude Piening, Head of Sotheby’s Orientalist Paintings Department, said: “Sotheby’s stand-alone Orientalist Sale will present some thirty works of the highest quality. We are committed to this important sector in the nineteenth-century market which has enjoyed robust growth over the last ten years, not least because of new interest from North Africa and the Middle East. We have therefore decided to create a ‘Masterpiece’ Orientalist Sale to coincide with a three-day series of related sales at Sotheby’s with the theme of Turkish and Islamic Week: Classical to Contemporary.** We are particularly fortunate to be offering two highly important and extremely rare works by Aivazovsky and Hamdy Bey, which represent a unique opportunity for private and institutional collectors alike. Great works by Hamdy Bey are exceptionally rare, with the added fascination that they provide a Turk’s – rather than an outsider’s – interpretation of life in the region.”

Lord Mark Poltimore, Deputy Chairman, Sotheby’s Europe, adds: “The Orientalist Sale in April brings a group of premier quality works to the market and is one of the most important Orientalist sales we have held for some years.”

The Ottoman Empire and Turkey have fascinated Western artists for centuries. As early as the eighteenth century, official painters attached to Western embassies and missions to the Ottoman Court began recording local landscapes, costumes, and diplomatic encounters, thus giving rise to a whole new genre in Western art called Orientalism. It is a genre that spread rapidly in the nineteenth century beyond the Ottoman lands, to encompass North Africa, and Egypt, and the Levant. Today, these paintings form an invaluable visual record of the manners and mores of Turkish and Middle Eastern culture before the dawn of photography. This style of painting was later adopted by Turkish painters themselves to depict their own culture in new ways.

The two highlights of Sotheby’s Orientalist Sale, Ivan Aivazovsky’s View of Constantinople and the Bosphorus and Osman Hamdy Bey’s The Scholar, respectively epitomise both viewpoints, the former an expression of a foreigner’s fascination for the Ottoman capital, the latter an intimate portrayal of Turkish life by a Turkish painter.

Ivan Konstantinovich Aivazovsky (Russian, 1917-1900) was one of the most talented practitioners of this period. View of Constantinople and the Bosphorus, an oil on canvas estimated at £1.2-1.8 million, is one of the artist’s most spectacular paintings and a tour de force in its evocation of light and atmosphere. He first visited Constantinople in 1845 as part of his duties as official painter to the Russian Admiralty. Aivazovsky’s composition, completed in 1856, celebrates the beauty and dynamism of a busy port, with the Nusretiye Mosque to the left of the painting displaying a distinctive blend of baroque and Islamic architecture, making it an important landmark for navigation of the Bosphorus. It is interesting that despite this painting being produced during the final year of the Crimean War, Aivazovsky makes no reference to the conflict, instead presenting to the viewer the Constantinople of peace time he had known ten years earlier.

The Scholar is the first of two known compositions by Osman Hamdy Bey (1842-1910) depicting a reclining man at study before a richly detailed background. Executed in 1878, it predates a second, later version, in the Walker Art Gallery, Liverpool, by twenty-seven years, and shows the young artist at the very height of his powers. Born in Constantinople and trained in Paris, Hamdy Bey was a central figure in the cultural life of the Ottoman Empire, having served in diplomatic positions on his return from the French capital, and later becoming the founder and director of the Academy of Fine Arts in Istanbul. He was the first Turkish artist to fully embrace an academic, European style. Estimated at £3,000,000-5,000,000, the present work eloquently combines the subjects and techniques of two distinctly different worlds. An Orientalist subject is explored and seen through the eyes of an artist intimately familiar with the culture he documents. A secluded corner of a madrasa or a mosque provided the setting for the painting, in which a scholar lies reading a book on a carpeted ledge against a wall of turquoise hexagonal files of the kind found in the Tiled Pavilion or Çinili Kösk in the grounds of the Topkapi Saray overlooking the Golden Horn, and in the Yesil Çami (Green Mosque) in Bursa. The niche in the wall is similar to those found in the seventeenth-century Twin Pavilions in the Topkapi palace, while the thirteenth-century Western Iranian candlestick on the left relates closely to an example now in the Victoria & Albert Museum in London. The carved Kufic inscription to the left of the niche is an invocation to God from the Koran, but Hamdy Bey takes some playful artistic licence, audaciously adding his own name to the right of the niche. The painting contains many visual and intellectual tensions: the young scholar concentrates on his text, yet appears remarkably nonchalant; he is respectful, having removed his shoes before entering the mosque, yet visibly relaxed, lying on his stomach, with his legs crossed and his chin propped up by his hand. These tensions – a juxtaposition of the minute observation of detail with the unexpectedly un-posed and unselfconscious demeanour of the reader – make The Scholar a proudly Turkish work, which offers European viewers a frank insight into Ottoman life, while consciously promulgating a new and radical form of visual expression in Turkey. 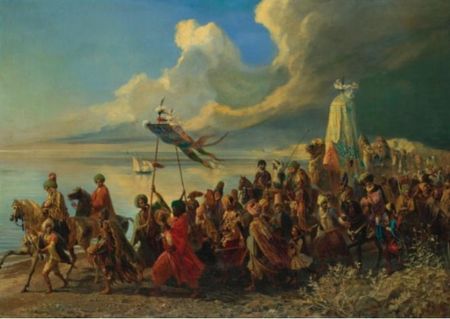 Le Hajj by Alfred Dehodencq (French, 1822-1882) is a large and lavish rendition of the annual Hajj (pilgrimage) en route to Mecca, and a wonderfully detailed painting of the subject by a Western artist (estimated at £100,000-150,000). Although the landscape is not specific, the shoreline suggests a location on the Red Sea, south of Aqaba. At the centre of the enfilade of dignitaries, janissaries, soldier, and musicians and mounted on the leading camel is the holy mahmal, the elaborate coffer containing the Koran that accompanies the pilgrims to Mecca. Ottoman control of the Hajj developed with the rise of the Ottoman Empire. As one of the five pillars of Islam, each Muslim was and is required to attempt Hajj at least once in a lifetime to visit the holy cities of Mecca and Medina. Many Western painters immersed themselves in the everyday life of the region to gain a meaningful understanding of their new subjects. John Frederick Lewis (British, 1805-1876), for example, spent ten years living in Cairo and consciously assimilated himself into Egyptian society. His impressive watercolour, Halt in the desert (estimated at £80,000-120,000), depicts the Bedouins’ gestures and costumes in minute and sympathetic detail. He returned to England in 1851 and exhibited a number of scenes portraying Bedouin Arabs with their camels in the Sinai desert, in the vicinity of the Red Sea. The influential Victorian critic, John Ruskin, praised the artist’s microscopic attention to detail. 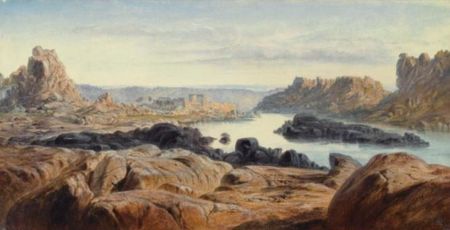 Edward Lear (British, 1812-1888), on the other hand, was fascinated by the beauty of the scenery and wildlife of the region, which he saw whilst travelling up the Nile and captured in fine detail. Its colours astonished him most. His oil paintings, with few exceptions, were derived from his rapid 'on the spot' pencil or pen sketches. His Philae (estimated at £30,000-40,000) is taken from a viewpoint on the rocky bank of the Nile to the west of the island. The focus is upon the foreground and the colours and rounded forms of the rocks are depicted in minute detail. The island takes a secondary role in the picture and the Ptolomaic Temple of Isis and the Kiosk of Trajan are dwarfed by the towering cliffs along the banks of the Nile. Today, this view provides us with a fascinating historical record of how the area looked in the nineteenth century and before the construction of the Aswan dam.

After his first trip up the Nile in 1854, Lear went back to Egypt thirteen years later, this time travelling up the Nile as far south as the second cataract just beyond Wadi Halfa. After he returned home, he used his sketches and colour notes as preparatory studies for a number of oils such as his Sheik Abadeh on The Nile (estimated at £30,000-40,000). Here, the glazes of pure paint capture the brilliance of the light which Lear had so carefully studied. Eugène Fromentin (French, 1820-1876) was one of the first French artists to spend extended periods of time in Algeria in the 1840s, and one of his most iconic compositions – and one of the most iconic images in nineteenth-century Orientalist art, Le Simoun, is featured in the sale (estimated at £200,000-300,000). Painted in 1864, it depicts to dramatic effect a group of horsemen silhouetted against an ominous sky, braving the simoun – the hot, dry, sand-laden windstorms of the North African and Arabian deserts – with well-practiced determination. The wild eyes of the two bay horses indicate their fear, as they seek solace in whatever source they can. Such evocative scenes were the result of first-hand experiences processed, as Fromentin wrote, 'through memory,' and the visual expressions of a very particular aesthetic and personal philosophy. Rebecca by Boris Anisfeld (Russian, 1878-1973), an oil on canvas dated 1913, is one of a series of Biblical subjects the artist completed during his last years in Russia before emigrating to New York in 1917. Estimated at £200,000-300,000, the painting epitomises his colourful, mystical aesthetic. With the support of Sergei Diaghilev, Anisfeld exhibited in the Russian section of the progressive 1906 Salon d’Automne in Paris alongside Fauve artists Matisse, Gauguin, and Derain, and his responsiveness to European artistic currents brought him fame in the West. 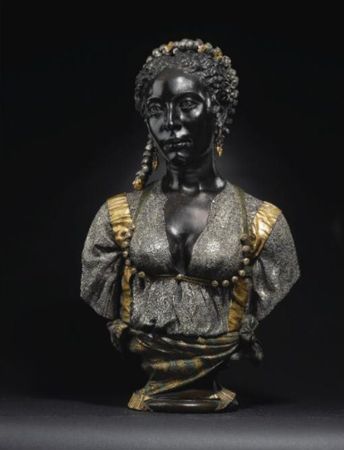 Mauresque noire by French sculptor Charles Cordier (1827-1905) is an important rediscovered bust created during the artist’s sojourn in Algeria (estimated at £50,000-80,000). One of three bronze versions, it is listed in the 2004 catalogue raisonné of Cordier’s works as location unknown and illustrated with an early tinted sepia photograph. It was exhibited at the International Exhibition in London in 1862. In 1856 Cordier was granted a fund of 1000 French Francs by the Musée d’Histoire Naturelle to visit Algeria with an official brief to ‘study the various types of indigenous peoples from the standpoint of art.’ He took up the challenge with enthusiasm and was determined to experience the culture as closely as possible. This included living among Algerians rather than fellow French ex-patriates in a native quarter of the Casbah, where he was accepted within the community. It was here that he captured the likeness of his Mauresque noire, overcoming the difficulty of gaining access to these inaccessible women with an element of subterfuge that allowed them to pose for him. The women of Algeria had long held an immense fascination for many French nineteenth-century artists. The present bronze, exhibited at the International Exhibition in London in 1862, has a particularly strong colouration, with a bright silvered blouse and an unusual green patination to the jacket, as well as to the green stripes of the scarf swathed around the socle. Cordier clearly esteemed this version as he bought it back after being forced to sell it in 1865 in order to fund his first trip to Egypt. Italian sculptor Pietro Calvi (1833-1884), an artist with an international reputation in the last quarter of the nineteenth century, is represented in the sale with Bust of Ben Ali-Ben Ladier, estimated at £20,000-30,000.