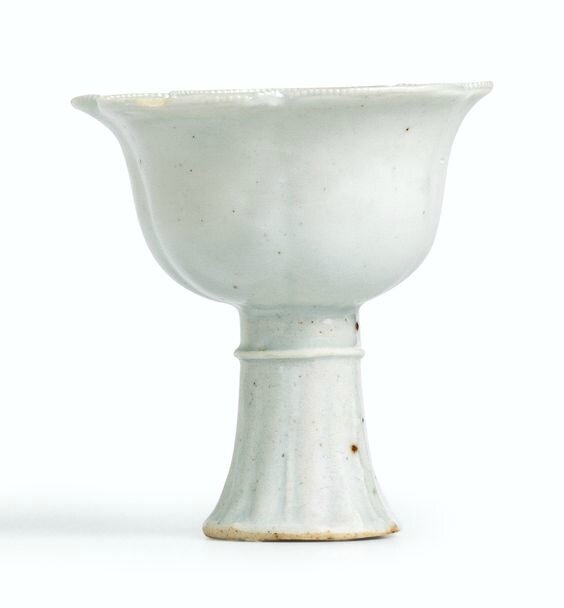 delicately potted with a five-lobed petal-shaped cup set with an everted rim, applied with fine beaded pearl strings on the rim and the interior lobes, radiating out from a small applied prunus blossom in the centre, supported on a tall, flared, fluted foot collared by a thin fillet, all beneath a pale icy-blue glaze

NOTE: Applied motifs and pearl beading, which are often seen on Yuan Jingdezhen porcelains, may be derived from the adornment of Bodhisattva figures, which the kilns also produced at that time. Porcelain vessels of this type, which captures the moment just before the introduction of underglaze-blue painting, tend to be particularly finely and thinly potted.

A similar stemcup, but in the shape of a peach blossom with pointed petals, and with pearl beading also down the outer sides, was recovered from a ship sunk in AD 1323 off the coast of Shinan, Korea; see The Shinan Wreck, 3 vols, Mokpo, 2006, vol. III, pl. 114; another excavated in Xi'an and now in the Shaanxi Provincial Museum, Xi'an, is published in Ye Peilan, Yuandai ciqi [Porcelain of the Yuan dynasty], Beijing, 1998, pl. 417; and one with additional scrollwork and petal panels in relief around the outside was excavated from a kiln at Hutian near Jingdezhen and included in the exhibition Ceramic Finds from Jingdezhen Kilns (10th-17th Century), Fung Ping Shan Museum, University of Hong Kong, Hong Kong, 1992, cat. no. 121.

A similar stemcup from the Carl Kempe collection is illustrated in Oriental Ceramics: The World's Great Collections, Tokyo, New York, San Francisco, 1980-82, vol. VIII, no. 200; another is published in Nigel Wood, Chinese Glazes. Their Origins, Chemistry and Recreation, London, 1999, p. 52; and one was sold at Sotheby's Hong Kong, 20th May 1981, lot 651. Compare also a small hexafoil dragon-handled cup from the Severance and Greta Millikin collection in the Cleveland Museum of Art, executed in the same style with lobes and rim outlined by beaded borders and the centre applied with a prunus blossom, illustrated in Michael R. Cunningham et al., Masterworks of Asian Art, Cleveland, 1998, p. 69