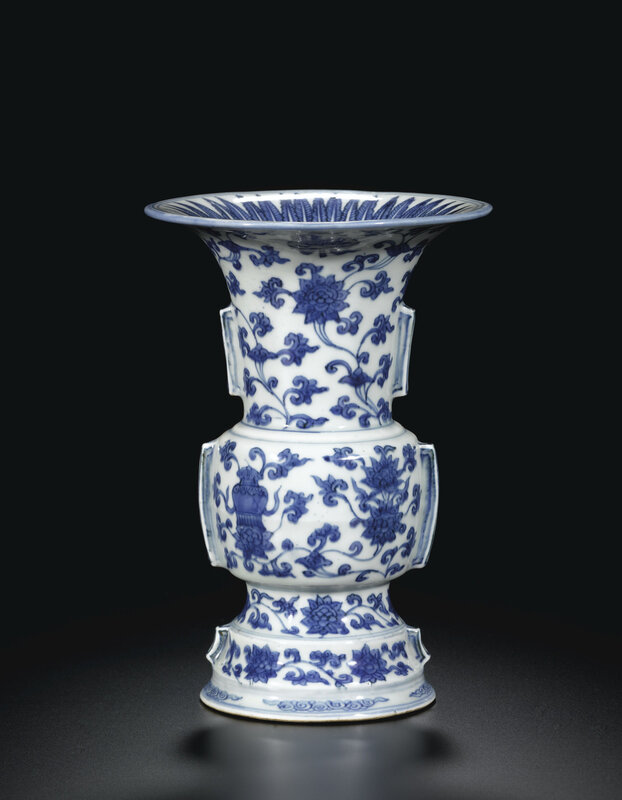 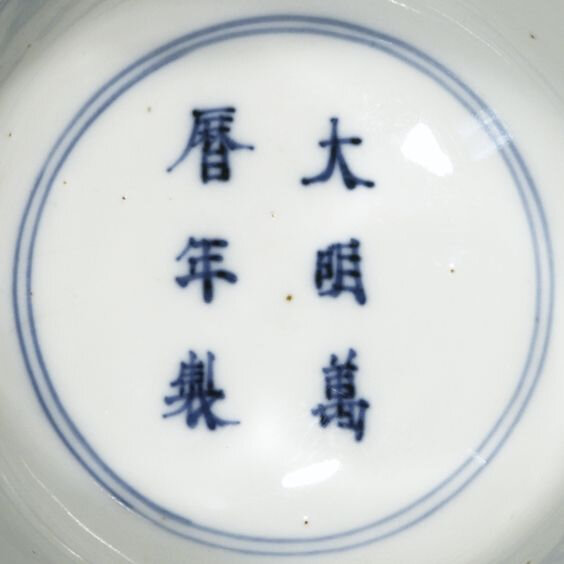 modelled after archaic bronze zun vessels, the bulging body decorated with four of the Eight Buddhist Emblems above lotus blooms borne on foliate scrolls, surmounted by a trumpet mouth with the other four beribboned emblems amid undulating lotus sprigs, all supported on a prominent flared foot similarly adorned with lotus scrolls, and accentuated by two vertical rows of flanges, the interior of the mouth with radiating overlapping plantain leaves, the countersunk base inscribed in underglaze blue with a six-character reign mark within double circles

NOTE: The popularity of vases of this form during the Ming and Qing dynasties is evident in the various media it was produced, including cloisonné, jade, bronze and ceramics. The present vase, however, is comparatively rare for its design of the bajixiang scattered amongst a leafy and flowering lotus scroll; a closely related example is illustrated in Sekai toji zenshu, vol. 11, Tokyo, 1955, p. 221, pl. 146; and another was sold in our New York rooms, 23rd October 1976, lot 245; again at Christie's New York, 18th September 1997, lot 149, from the Jingguantang collection, and a third time in these rooms, 23rdOctober 2005, lot 340.

The Palace Museum, Beijing, holds three vases of this type, all of which belonged to the Qing Court collection, one of Zhengde mark and period, decorated with dragons at the neck, body and foot, another of Jiajing mark and period, painted respectively with peonies, dragons and clouds, and a third Wanli mark and period vase decorated with peonies, a dragon and phoenix and clouds. All three vases are illustrated in The Complete Collection of Treasures of the Palace Museum. Blue and WhitePorcelain with Underglaze Red (II), Shanghai, 2000, pls. 50, 91 and 171. It is interesting to observe their stylistic transformation over several reign periods.

Two Wanli vases also decorated with a dragon between peony shrubs at the neck and cloud sprays at the foot, in the Shanghai Museum, Shanghai, and from the John Gardner Coolidge collection in the Museum of Fine Arts, Boston, are published in Wang Qingzheng, Underglaze Blue and Red, Hong Kong, 1993, pl. 137, and Oriental Ceramics. The World's Great Collection, vol. 10, Tokyo, 1980, pl. 239 respectively; and a third example was sold at Christie's New York, 19th September 1996, lot 271.