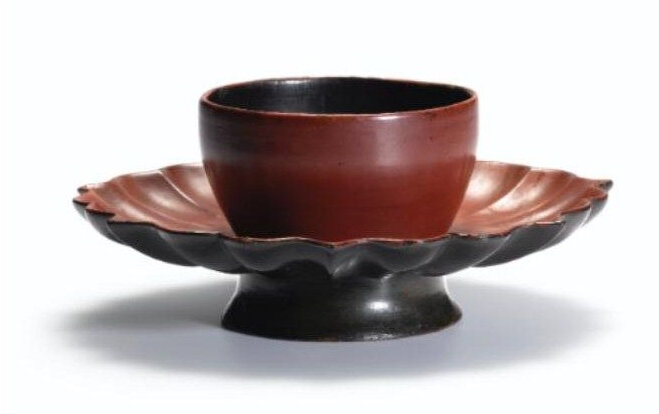 NOTE: The present plain lacquer foliate form cupstand, formerly in the repository of the Higashi Hongan Temple in Kyoto, represents the aesthetic ideals of Song connoisseurs who celebrated elegance and natural simplicity. It is unrivalled in its beauty and tactile minimalism, and the high quality of the workmanship is evident from its feather light weight and delicate form. Despite its delicate appearance, the stand is surprisingly sturdy and durable due to the nature of the
lacquer coating.

Cupstands of this type were appreciated for the part they played in the aesthetics of the tea ceremony. Made in cinnabar or black lacquer, they generally supported a black-glazed bowl, together providing the ideal colour contrast to the whisked white tea. Historically, monastic communities in Southern China, especially those in the Tianmu mountain region, used dark-glazed teabowls known as 'Tianmu wares' for drinking tea. Japanese Buddhist monks frequently journeyed to Fujian during the Song dynasty to purchase these much sought after teabowls and stands which came to be treasured in their country and called tenmoku wares.

A very similar stand, from the Tokugawa Art Museum, was included in the exhibition So Gen no bi, Nezu Institute of Fine Arts, Tokyo, 2004, cat.no. 158. See three black lacquer stands of this form, one from the Arthur M. Sackler Gallery, Washington D.C. and one in the Museum für Lackkunst, Munster, both illustrated in Monica Kopplin (ed.), The Monochrome Principle, Munich, 2011, pl. 9 and pl. 17, and the third included in Lee Yu-Kuan, Oriental Lacquer Art, New York and Tokyo, 1972, pl. 32.

See also a dish of similar size and shape, in the Asian Art Museum of San Francisco, illustrated in Hai-Wai Yi-Chen. Chinese Art in Overseas Collections. Lacquerware, Taipei, 1987, pl. 23, together with a black lacquer cupstand, with a lobed tray, in the Los Angeles County Museum of Art, pl. 24. Compare another dish of this elegant foliate shape, in the Tokyo National Museum, included ibid., pl. 42.

A black lacquer, eight bracket, lobed dish, from the Lee Family collection, was sold at Christie's Hong Kong, 1st December 2009, lot 1801, attributed to the Yuan dynasty; and another foliate rimmed dish bearing a Yu Zhang mark in red lacquer on the base, from a noble Japanese family collection, was offered in these rooms, 8th October 2010, lot 2638. Examples of plain lacquer cupstands of circular form were included in the Nezu Institute of Fine Art exhibition op.cit., cat. nos. 144-149 and 153-157