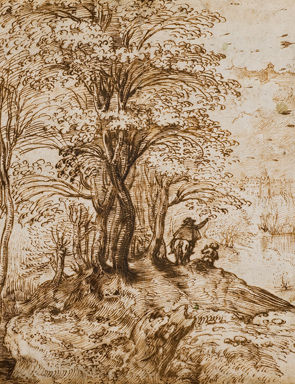 ANTWERP.- From 16 June through 14 October 2012, the Museum Mayer van den Bergh will host the Pieter Bruegel Unseen! The Hidden Antwerp Collections exhibition. For the first time ever, the museum will be displaying some 30 prints by Pieter Bruegel the Elder to the general public. The exhibition will however also unveil another gem: a landscape drawing by the master newly discovered by curator Manfred Sellink.

Fritz Mayer van den Bergh (1858-1901) was a passionate art collector with a keen eye for masterpieces. One of his favourite artists was Pieter Bruegel the Elder. Museum Mayer van den Bergh owns two world-renowned works by the Flemish master: Dulle Griet (Mad Meg) and Twaalf Spreuken (Twelve Proverbs). In addition to these paintings, however, the museum’s collection also boasts some 30 prints by Brueghel. They will be on display to the general public for the first time ever in the exhibition, Pieter Bruegel Unseen! The Hidden Antwerp Collections, which runs from 16 June through 14 October, together with 11 Bruegel prints from the rich collection of the Museum Plantin-Moretus/Prentenkabinet (Museum Plantin-Moretus/Prints Room).

Curator Manfred Sellink, however, has another surprise in store for visitors...

In late 2011, Sellink, curator of the exhibition, Director of Musea Brugge and for years a researcher of Pieter Bruegel the Elder’s body of work, received a photo of a drawing from a private collector’s collection. Sellink and Martin Royalton-Kisch, former curator of the British Museum Department of Prints and Drawings, came to the conclusion, after a thorough study, that the landscape drawing belonging to the private collector could indeed be ascribed to Pieter Bruegel the Elder.

Comparisons of the paper type with drawings from the same period and an ultraviolet light test lent weight to their conclusion. For example, it appeared that the newly discovered landscape drawing’s paper was of the same Italian origin as the paper that Bruegel used during his journey to and stay in Italy from 1552 to 1554. In addition, ultraviolet light made traces of a signature visible in the bottom left corner.

The drawing of a mountain landscape with two travellers is the first unknown drawing by Bruegel that has appeared since the 1970s. The landscape drawing has all of the characteristics (composition, image structure and drawing technique) of Bruegel’s self-drawn pieces from the 1552-1555 period.

Striking details such as the characteristic way in which the birds are drawn, the manner in which the leaves of the trees are continuously typified by a recurring horizontal “3”, the long parallel shading used to create depth, the manner - as swift as it is accurate - in which the two travellers are shown in the centre, the remarkable way in which the crown of the trees in the background is created using a row of thin strips, the characteristic differences between the foreground’s fluent and sturdy ink-filled pen strokes and the much thinner, more precisely laid-out background... everything points to the drawing being the work of Pieter Bruegel the Elder.

This recently discovered landscape drawing will be on display for the first time ever in the Pieter Bruegel Unseen! The Hidden Antwerp Collections at the Museum Mayer van den Bergh starting on 16 June 2012