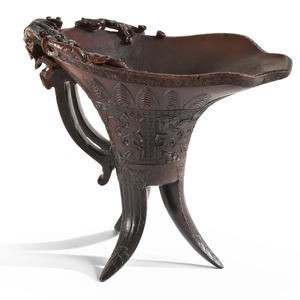 Modelled in the form of an archaic bronze with a deeply-hollowed body, crisply carved around the exterior with a large taotie mask beneath the squared spout and another behind the double-loop handle, all on a band of leiwen forming an intricate ground beneath a row of upright cicada lappets, the top of the handle cleverly carved with three small dragons crawling along and around the edge, all standing on three widely-spreading legs carved with shallow-relief feet below double borders of squared spirals, the surface of rich dark well-patinated tone. 15cm (5 7/8in) wide Lot 219Y. Estimate: £120,000 - 150,000 / CNY 1.2 million - 1.5 million / HK$ 1.5 million - 1.8 million

Compare a related rhinoceros horn jue cup, attributed to the 17th century, sold at Christie's London, on 10 May 2011, lot 6.