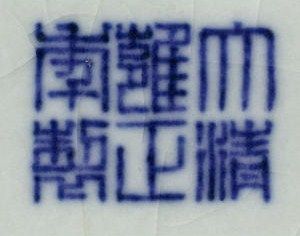 A very fine and rare Guanyao-type moonflask Yongzheng seal mark and of the period. Photo Bonhams

The heavily-potted vase moulded with eight facets around the sides and two convex main faces, the cylindrical neck set with two zoomorphic dragon handles rising to the rounded rim, all on a slightly-domed rectangular base, the glaze of pale lavender-grey tone with an extensive wide light golden-brown craquelure simulating somewhat the Song Dynasty prototype for this kind of Qing Dynasty revival vessel. 49cm (19½in) high - Lot 303 Estimate: £300,000 - 500,000 / CNY 3.0 million - 5.0 million / HK$ 3.7 million - 6.2 million

According to the family, acquired in the 1930s in Oxford, and thence by descent.

The present vase combines innovation and archaism, greatly inspired in its glaze from the subtle Imperial Southern Song Dynasty Guan glaze, yet reinterpreting it in this impressive octagonal moonflask form drawing on the Ming Dynasty, thus reflecting the trend of innovation within tradition, which took place during the Yongzheng reign and continued in the Qianlong reign. As noted by Regina Krahl in E.R.Rawski and J.Rawson, eds., China: The Three Emperors 1662-1795, London, 2006, p.245: 'The signature works of the Yongzheng period, however, are those whose deceptive simplicity made the greatest demands on the potters' aesthetic conception and technical ability. The Yongzheng Emperor's fascination with antiquity, his collecting of antiques and the resulting passion for archaism on the one hand, and his personal taste, demand for quality, and engagement of contemporary craftsmen on the other, gave Qing art its identity and shaped our idea of Chinese art in general.' Undoubtedly the present vase encapsulates these aspects with its subtle archaic-inspired glaze, yet technically demanding form and monumental size produced in the Imperial kilns in Jingdezhen.

Compare a related Ge-type lobed moonflask, Yongzheng mark and of the period, of similar size, sold at Sotheby's Hong Kong on 8 April 2011, lot 3017.