Note: James Abbott McNeill Whistler first visited Venice in September, 1879, bankrupt but hoping to restore his reputation and his fortune by completing a commission for twelve etchings. He fell in love with the city, especially its backwater canals and decaying palazzi, and remained for fourteen months. While there Whistler completed fifty etchings-far more than the number for which he had been commissioned-as well as one hundred pastels, which he described in a letter to his dealer as being "totally new and of a brilliancy very different from the customary watercolor."

Described by Whistler's friend, E. W. Godwin, as "a bright sunny bit of an old palace," [Glasgow University Library, Whistler Collection, as quoted in Margaret F. MacDonald, James McNeill Whistler: Drawings, Pastels and Watercolours: A Catalogue Raisonne, p. 277] White and Pink (The Palace) is alive with color and spontaneity. It depicts the facade of a Venetian palazzo, with gondolas awaiting passengers at the water's edge. On the reverse is the merest wisp of a sketch.

In 1881, the prominent American collector Louisine Havemeyer visited Whistler in his studio and purchased a number of Venetian pastels that she eventually gave to the Detroit collector, Charles Lang Freer. These are now included in the collection of the Freer Gallery of Art in Washington, DC. It is not known if the present work was acquired on that occasion. It was first exhibited in London in 1881 and was certainly owned by Mr. and Mrs. H. O. Haveyeyer by 1904, when it was lent by H. O. Havemeyer, Esq. for exhibition in Boston, then identified as The Palace - Pink and White.

Margaret F. MacDonald described the frames for his exhibition of fifty-three pastels at the Fine Art Society: "Whistler designed the frames, with slim bands of reeding either side of a flat fillet, in three shades of gold (yellow, pink and green): 'now "old gold" and now gold of almost a silvery complexion, to suit the scheme of color adopted in his pictures.' The Palace; white and pink, for example, suited a warm gold frame, while a yellow gold frame set off the cooler color of Fishing Boats." [Margaret F. MacDonald, Palaces in the Night: Whistler in Venice, p. 99] It is conceivable that the frame on the present work, which corresponds so closely to the description, may be original to the piece. Highlighting the American Art was an important pastel by James Abbott McNeill Whistler that set a new world auction record for a work on paper by Whistler. Estimated at $100,000-150,000, the pastel sold to a bidder in the salesroom for a staggering $650,500. The work had descended in in the family of American Gilded Age collectors Louisine and Henry O. Havemeyer. Whistler first visited Venice in September 1879 and fell in love with the city. He created one hundred pastels, which he described as being "totally new and of a brilliancy very different from the customary watercolor." In 1881, the prominent American collector Louisine Havemeyer (Mrs. Henry O. Havemeyer) visited Whistler in his studio and purchased a number of Venetian pastels. White and Pink (The Palace) was consigned to the sale by a descendant of the Havemeyers.

Attracting the strongest interest in the European Art were works by Edouard Vuillard from the collection of longtime MoMA board member Joanne Melniker Stern. Fashionable Lady, Square des Batignolles, circa 1898, executed in distemper on cardboard, achieved $374,500, more than tripling its estimate of $80,000-120,000. A circa 1895 oil on paper titled The Black Belt estimated at $100,000-200,000 sold for a stunning $350,500.  (All prices include the Buyer's Premium. ) 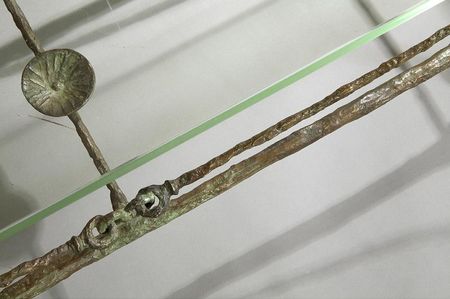 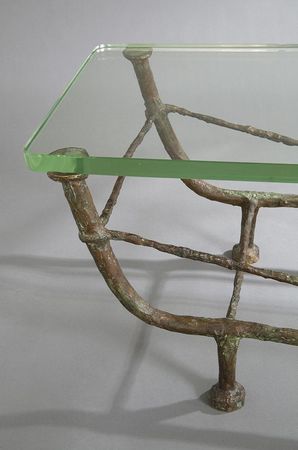 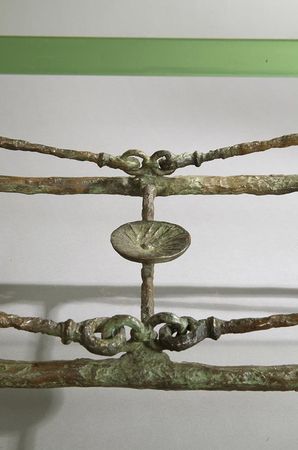 Bronze with green/brown patina. Height 15 inches, width 54 1/4 inches, depth 16 1/4 inches. The patina varries from golden brown to an oxidized green. The finish of the patina is even and consistent, thus the variation in color is probably intended. The surface of the four feet have worn patina with areas of the raw bronze showing. The glass has one fisheye chip at the edge and surface scratches. Estimate $80,000-120,000. Sold for $170,500