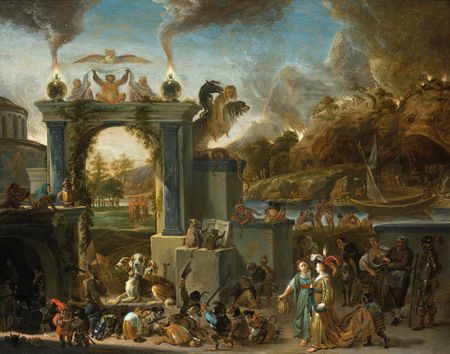 LONDOIN - The fourth Master Paintings Week takes place from 29 June to 6 July 2012 and is one of the key events in London’s Summer season. This collaboration between twenty-three leading dealers and three auction houses offers an extraordinarily wide selection of European paintings dating from the 15th to the 20th centuries. New to Master Paintings Week in 2012 are Haldane Fine Art, Noortman Master Paintings and Theo Johns Fine Art Ltd. Each of the twenty-three participating galleries, all of which are in the heart of London’s Mayfair and St James’s, will stage a special exhibition or event or unveil new discoveries, emphasising the unrivalled expertise to be found in London. Auctions will be held at Bonhams on 4 July, at Christie’s King Street on 3 and 4 July and Christie’s South Kensington on 6 July, while Sotheby’s sales will be on 4 and 5 July. Master Paintings Week coincides with another dealer initiative, Master Drawings London (27 June to 5 July).

Among the fine Dutch and Flemish works to be shown will be a surprisingly entertaining scene despite its morbid title, The Gates of Hell, by Cornelis Saftleven (1607-1681) and a ravishing oil on copper of A Vase of Flowers in a Window by Ambrosius Bosschaert the Elder (1753-1612) both at Johnny Van Haeften. Bosschaert was the first artist to specialise in flower painting and this recently discovered flower-piece is a welcome addition to his relatively small oeuvre. Another wonderful floral depiction is Flowers in a Terracotta Vase by Jan van Huysum (1682-1749) which is being shown by Noortman Master Paintings. A later Flemish flower painting will be shown by Deborah Gage (Works of Art). Flowers in a Glass Vase on a Ledge was painted by Jan Frans van Dael (1764-1840) who settled in Paris where he secured commissions from Empress Josephine and Marie-Louise Bonaparte, Louis XVIII and Charles X, among others. Deborah Gage will also unveil St Catherine of Alexandria, a Gothic panel from an altarpiece originally ascribed to the Master of Sant Quirse and the Master of Riglos but recently attributed to the Catalan artist, Honorat Borrassa (active 1424-1457). Other panels are in the Metropolitan Museum of Art, New York, and Campion Hall, Oxford.

Study of a Young Man in Profile by Sir Anthony van Dyck (1599-1641), an example of the artist’s work during his apprenticeship and collaboration with Rubens, will be featured by Fergus Hall Master Paintings, while a typically bucolic Milking scene along a river by Aelbert Cuyp (1620-1691) will be seen at Richard Green. New participant Haldane Fine Art will show Noah Entering the Ark by Hans Jordaens III (c. 1595-1643), the support of the panel branded with the coat-of-arms of the city of Antwerp. John Mitchell Fine Paintings unveils Young Woman with Wine Glass, 1663, by Cornelis Pietersz Bega (1620-1664) while another canvas illustrating pleasure and enjoyment is A Drinker with a Flask by Théodor Rombouts (1597-1637), an early Flemish follower of Caravaggio, on view at Whitfield Fine Art. 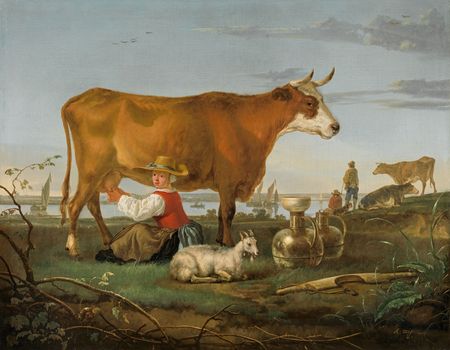 Amongst the works to be shown by Colnaghi will be a newly-discovered Moonlit Seascape by Claude-Joseph Vernet (1714-1789) dating from 1753-4 when the artist was at the height of his powers. The same gallery will feature Spring: a landscape with elegant company on a tree-lined road by Jan Brueghel the Elder (1568-1625) and Joos de Momper (1564-1635), which is a splendid example of the collaborative works by these two artists who also feature with the painting A Coastal Landscape with Fishermen with their Catch by a ruined Tower at Sphinx Fine Art. A particular highlight of Sphinx’s will be the handsome three-quarter-length portrait of Britain’s youngest-ever Prime Minister, William Pitt the Younger (1759-1806), by John Hoppner (1758-1810), formerly in the collections of the Marquesses of Londonderry. Another splendid portrait will be found at The Weiss Gallery. This Tudor painting of Catherine Carey, Countess of Nottingham (c. 1547-1603), by Robert Peake (c. 1551-c. 1619) was once thought to represent Elizabeth I. The magnificent costume surpasses the famed portraiture of the Queen and the dress and jewels may well have been gifted or loaned by the Queen to the sitter, who was her closest friend and confidante. Such was their bond of friendship that Catherine’s death in February 1603 is said to have precipitated the Queen’s own demise only weeks later. In contrast Ben Elwes Fine Art will be exhibiting a collection of European en plein air oil paintings assembled over the last forty years by the respected connoisseur John Lishawa, known for his passion and knowledge, unequalled in this area of scholarship. The exhibition will comprise some forty pictures by such artists as Achille Etna Michallon (1796-1822), Alexandre-Hyacinthe Dunouy (1757-1841), Jean-Victor Bertin (1767-1842), Pierre Henri de Valenciennes (1750-1819) and Jean-Charles-Joseph Remond (1795-1875). The phenomenon of painting in oils directly from nature began in the late 18th century with French and British artists travelling in southern Europe and by 1830 the practice was almost universally accepted among landscape painters. Trompe l’oeils will be among the works to be shown by Rafael Valls including one of a violin and a bow hanging from a red silk ribbon by Claes Bellekin (1620-c. 1675). It is possible that the instrument depicted was made by Hendrick Jacobsz (1629-1699), a well-known violin maker and contemporary of the artist. The gallery will also feature a delightful scene of a young boy pleading for his toy by Henri-Pierre Danloux (1753-1809), while equally appealing is an amusing depiction of Venus and Cupid by Benedetto Gennari (1633-1715) on show at Piacenti Art Gallery. 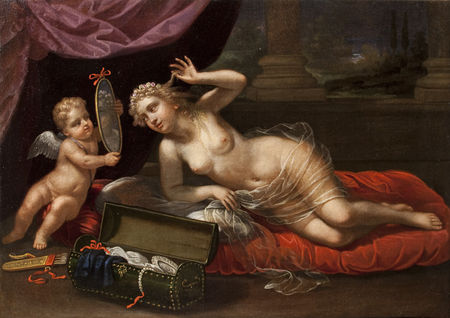 Derek Johns will feature St Augustus by the great Venetian painter Giovanni Domenico Tiepolo (1727-1804) while Charles Beddington will show A ruined Ionic Portico and a Tower by an Inlet, a Port and hilltop town beyond and A ruined Doric Portico and a round Tempietto by an Inlet, The Castel Sant’ Angelo and Saint Peter’s beyond, a pair of capriccios by Antonio Joli (c. 1700-1777) with the figures painted by Francesco Fontebasso (1707-1769).A capriccio of a Mediterranean seaport by Luca Carlevarjis (1663-1730) will be shown by BNB Art Consulting, while on view at Stair Sainty is aClassical Landscape, with Wren’s dome of King Charles Court, Greenwich Hospital (today the Royal Naval College, Greenwich) by Marco Ricci (1676-1730), one of several of his works depicting the Greenwich-inspired dome amongst classical ruins. 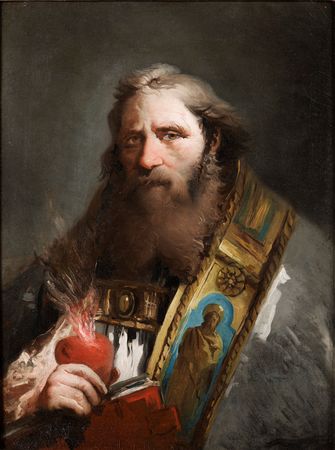 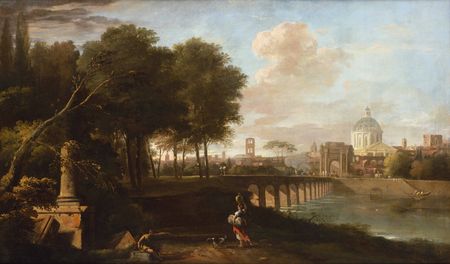 Robilant + Voena will exhibit a delightful Virgin and Child with a Saint by Andrea Solario (c. 1465-c. 1524) while Madonna and Child with the Infant St. John the Baptist painted by Lorenzo Lippi (1606-1656) in the early 1630s will be found at Moretti Fine Art. Noli me tangere by Giuseppe Nicola Nasini (1657-1736) is a moving depiction of Jesus and Mary Magdalene being featured by new participant Theo Johns Fine Art, and there is an unusual depiction of Mary Magdalene with a skull by Onorio Marinari (1627-1715) at Riccardo Bacarelli and Bruno Botticelli. 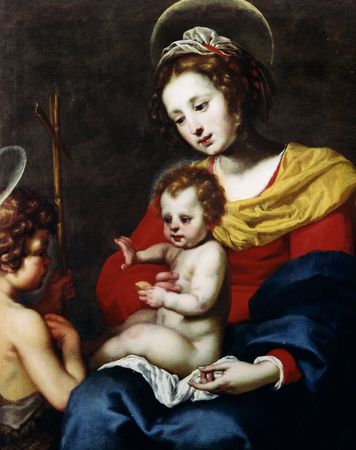 As the Winter sales of Old Master paintings demonstrated, the market is strong, especially for rare and beautiful works in good condition. Besides the three international auction houses, London boasts more knowledgeable dealers than any other city in the world. Their galleries are a short walk from one another and will be open during Master Paintings Week on Monday to Friday 10 am to 6 pm, Saturday 10 am to 5 pm and Sunday 12 noon to 5 pm. The auction houses will be open from 9 am to 4.30 pm Monday to Friday, and 12 noon to 5 pm on Saturday and Sunday. www.masterpaintingsweek.co.uk