LONDON.- A pair of exquisitely decorated Castelli maiolica campana vases and covers was one of the top lots in the Fine European Ceramics sale at Bonhams on Wednesday 23rd May. After competitive bidding, the vases sold for the exceptional price of £40,850, smashing the pre-sale estimate of £20,000 - 30,000.

Originally owned by the legendary 18th century art collector, Sir Andrew Fountaine, the vases were sold in the famous Fountaine Collection sale in 1884, which included stunning works of maiolica from Narford Hall in Norfolk.

Sebastian Kuhn, Director of the Ceramics department at Bonhams said: “These vases are fabulous examples of highly coloured maiolica ceramics from the Fountaine Collection, much of which is now in the Victoria and Albert Museum. It has been very exciting to see so much interest in the vases, which were originally part of a prominent Norfolk collection, with a fascinating history.”

Sir Andrew Fountaine was a distinguished bachelor who, after sampling the delights of Italy, dedicated his life to re-designing the family seat of Narford Hall and furnishing the property with an extraordinary collection of artworks and ceramics. The author Richard Beatniffe said in 1773 that “nothing is more striking than the cabinet of earthenware” and it seems that there are few private collections in the country that would rival that of Sir Andrew Fountaine’s 18th century collection.

The vases are particularly fine examples of maiolica, a form of highly decorated and coloured ceramic, with scenes based upon engravings by Domenico dalla Greche and Nicolas Cochin. They feature striking religious stories with one of the works, ‘Destruction of Pharaoh’s Host in the Red Sea’, created after a design by the great master Titian. 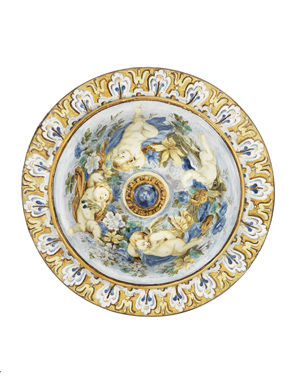 Painted with continuous landscape scenes, one depicting the Destruction of Pharaoh's host in the Red Sea, the other the Adoration of the Magi, below a foliate border around the blue-edged rim, the bulbous, gadrooned lower body painted with leaves against a seeded ground, embellished in blue, the flared feet painted with busts and grotesques on a blue seeded ground, the domed covers painted with putti supporting a band of flowers and stylised foliate borders against a blue and ochre ground, respectively, 40.5cm high,incised Fountaine Collection inventory numbers 4 19 and 4 20 to inside of vases (one with foot restored and restored rim chips, the other with small repair to foot) (4)

The sale catalogue of the celebrated Fountaine Collection, one of the greatest European collections of Italian maiolica, describes lot 72 as 'A PAIR OF ABRUZZO VASES AND COVERS, the bottom part raised in ribs and painted in light brown foliage, subjects, Egyptians drowned in the Red Sea, many figures, and the Adoration of the Magi, cupids and flowers on the lid - 15 3/4in.'

For a detailed discussion of the Fountaine Collection and the historical source material, see Andrew Moore, 'The Fountaine Collection of maiolica', The Burlington Magazine, Vol. CXXX No. 1023, June 1988. The collection was founded by Sir Andrew Fountaine (1676-1753), and added to by his descendents, particularly Andrew Fountaine IV (1808-73), in the 19th century. In Appendix I, Moore reproduces the Inventory of 1835, drawn up by Andrew Fountaine IV when he inherited Narford from his father, Andrew Fountaine III. The vases are listed under 'Raphael ware Vases', numbers 4 and 5, described as 'The wise men offering. The Egyptians destroyed in the Red Sea. II.' (p. 441). In Appendix II, Moore gives a concordance between the inventory of the Family Book of Narford Hall, compiled between 1855-73 and the lot numbers of the 1884 sale, where these vases are listed as V:19/20, part V being allocated to 'Majolica ware of various forms cisterns, ewers, pilgrim bottles including Vases... [Total:77]' (p. 444). From these inventories, it can be inferred that this pair of vases belonged to the 18th-century core of the collection formed by Sir Andrew Fountaine.

The pair of vases are illustrated in a composite photograph of the China Room of Narford Hall, taken around 1884, on the first shelf to the left and right (published by Moore, p. 437).

The source of the decoration on one of the vases can be attributed to a work entitled 'Destruction of Pharaoh's Host in the Red Sea', circa 1549 by the engraver Domenico dalle Greche, after Titian. A woodcut print on paper depicting the same scene is in the collection of the British Museum, inv. no. 1980,U.9. This example was printed from twelve blocks on twelve sheets assembled together, published by Domenico dalle Greche and by Bernardino Benalio. An inscription to the left reads 'La crudel persecutione del ostinato Re, contro il popolo tanto da Dio amato, con la sommersione di esso Pharaone goloso dil inocente sangue. Disegnata per mano dil grande, et immortal Titiano. In Venetia per Domeneco dalle Greche depentore Venetiano. MDXLIX'.

D.Rosand & M.Muraro state in their book Titian and the Venetian Woodcut (1976), cat.4, that on 9 February 1515 Bernardino Benalio applied for a privilege for copyright protection for a number of prints including 'the submersion of Pharaoh'. This securely dates the first state, although surviving impressions are all from the 1549 reprint published by Domenico dalle Greche. For further reading on another series of these woodcuts see Louise S. Richards, The Bulletin of the Cleveland Museum of Art, Vol 43, No. 9 (Nov., 1956), pp. 197-201.

The decoration on the other vase is based on 'The Adoration of the Magi' by the French draughtsman and engraver Nicholas Cochin (1610-1686). A print depicting the same scene is in the collection of the National Gallery of Art, Washington, inv. no. 2006.87.1. Nicolas Cochin, called the Elder, was the son of a painter named Noel Cochin. He was probably trained as a painter by his father in Troyes, later settling with his younger half-brother Noel in Paris around 1635, where he became a prolific etcher. Since both brothers signed their prints with the same first initial, ­however, it is somewhat difficult to distinguish his work from that of Noel.

Sir Andrew Fountaine: Andrew Fountaine (1676-1753) was a Classics scholar, attending Eton College, and then Christ Church, Oxford, from which he graduated in 1697. He was introduced to court by William Cavendish, 2nd Duke of Devonshire, and was knighted in 1699 by William III for the Latin oration he had made to mark the king's entry to Oxford the previous year.

He took a second Grand Tour in 1714, and it is believed it is this tour where he began collecting maiolica, paintings and sculpture for himself and for the Earls of Pembroke (he would later catalogue the 8th Earl's collection for his son, the 9th earl). A portrait of the 39 year old Sir Andrew Fountaine and friends in the Tribuna, of the Uffizi, Florence by Giulio Pignatta, circa 1715 was included in the exhibition, Norfolk and the Grand Tour (1985) Castle Museum, Norwich. He succeeded Walter Cary as warden of the Royal Mint Aug 12 1727, but retired from London in 1732 or 1733, from this point he devoted his time to alterations of Narford

Narford Hall: In 1773 the author Richard Beatniffe wrote in the second edition of his work Norfolk Tour, or Traveller's Pocket Companion:

'Narford, the seat of Brigg Fountaine, Esq. built and furnished by the late Sir Andrew Fountaine, The house is a good one, but not the object of view so much as the curiosities it contains, amongst which nothing is more striking than the cabinet of earthen ware, done after the designs of Raphael; there is a great quantity of it, and all extremely fine...'

A collection of drawings currently in the collection of the V&A, by Sir Willliam Chambers for Narford Hall, include a design for the South Front elevation, as well as sketches of a pair of 'pilgrim flasks', 'ceramic ewers', an 'earthenware bowl of St. Porchaire ware' and a detail of an Urbino maiolica pilgrim flask, museum no. 5712.407. These sketches have been elaborated which suggests items from the collection were destined to be mounted. The top lot of the sale on Wednesday was A Nymphenburg white figure of Julia from the Commedia dell’Arte, which sold for £56,450, outstripping the pre-sale estimate of £10,000 – 15,000. Other sale highlights included several examples of fine Meissen porcelain. A Nymphenburg white figure of Julia from the Commedia dell'Arte, circa 1760. Photo: Bonhams

Modelled by F.A. Bustelli, gesturing with her right hand and holding the edge of her jacket with the left, 19.7cm high,impressed shield mark, P and I (tiny chips). Lot 148. Sold for £56,450

Other published unpainted examples of this figure are in the Museum für Angewandte Kunst, Frankfurt; the Museum für Kunst und Gewerbe, Hamburg; the Germanisches Nationalmuseum, Nürnberg; and in the Württembergisches Landesmuseum, Stuttgart (Hantschmann/Ziffer, op. cit., no. 140, also for painted examples).