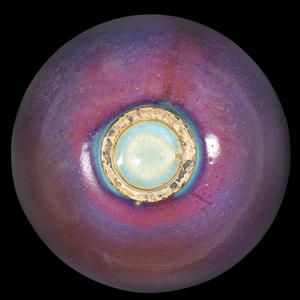 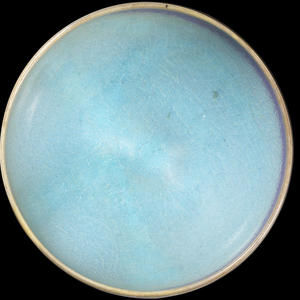 Of large rounded form supported on a short straight foot, the curved sides rising to a gently inverted rim, the deep body covered all over in an even milky lavender blue glaze, thining to a greyish olive green hue at the extremities, the exterior with generous splashes of vibrant purple glaze with contrasting raspberry red tones, partly overflowing over into the inner rim, the overall body with soft crackles and the footrim unglazed, Japanese box. 14.4cm wide. (2). Lot 254. Sold for HK$ 375,000

Junyao bowls of this form with such extraordinary vivid colour are extremely rare. Smaller ceramics from the Jun kilns, such as the Junyao 'bubble bowl' offered as lot 255 in this sale, can be found, but it is almost unprecedented to find a bowl of such a large size in which the exterior is glazed in such a deep and vivid purple. The contrast with the brilliant lavender-blue of the interior marks this out as one of the most outstanding preserved examples of Junyao ware.

None of the great repositories of Junyao ware, such as the Percival David Foundation, London, National Palace Museum, Taipei or Palace Museum, Beijing preserve a bowl of this form and glaze. It appears that the only comparable published example is one in the Uragami collection, illustrated in Shuushuka Uragami Toshiro No Me. Kanzo Meihinten (Eyes of a collector - Toshiro Uragami : Hagi Uragami Museum Collection), Tokyo, 1996, p.107, no.90 (fig.1).