Mantegna to Matisse: Master Drawings from The Courtauld Gallery

Mantegna to Matisse: Master Drawings from The Courtauld Gallery he Courtauld Gallery holds one of the most important collections of drawings in Britain. Organised in collaboration with the Frick Collection in New York, this exhibition presents a magnificent selection of some sixty of its finest works. It offers a rare opportunity to consider the art of drawing in the hands of its greatest masters, including Dürer, Leonardo da Vinci, Michelangelo, Rembrandt, Goya, Manet, Cézanne and Matisse. The Courtauld last displayed a comparable selection of its masterpieces more than twenty years ago and this exhibition will bring the collection to new audiences nationally and internationally.

The exhibition opens with a group of works dating from the 15th century, from both Northern and Southern Europe. An exquisite and extremely rare early Netherlandish drawing of a seated female saint from around 1475-85 is rooted in late medieval workshop traditions (above). It was also at this time that drawing assumed a new central role in nourishing individual creativity, exemplified by two rapid pen and ink sketches by Leonardo da Vinci. These remarkably free and exploratory sketches show the artist experimenting with the dynamic twisting pose of a female figure for a painting of Mary Magdalene (below). For Renaissance artists such as Leonardo, drawing or disegno was the fundamental basis of all the arts: the expression not just of manual dexterity but of the artist’s mind and intellect. 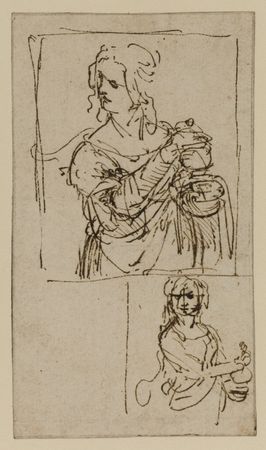 These ideas about the nature of drawing achieved their full expression in the flowering of draughtsmanship in the 16th century. At the heart of this section of the exhibition is Michelangelo’s magisterial The Dream(below). Created in 1533, this highly complex allegory was made by Michelangelo as a gift for a close friend and it was one of the earliest drawings to be produced as an independent work of art. 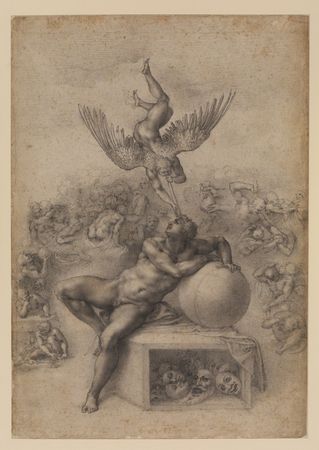 More typically, drawings were made in preparation for other works, including paintings, sculptures and prints. Pieter Bruegel the Elder’s engaging scene of drunken peasants cavorting at a festival in the Flemish village of Hoboken was drawn in 1559 in preparation for a print (fig. 4). Whereas Michelangelo sought ideal divinely inspired beauty in the human figure, Bruegel here revels in the disorder of everyday life. Despite the important preparatory function of drawing, many of the most appealing works in the exhibition were unplanned and resulted from artists reaching for their sketchbooks to capture a scene for their own pleasure. Parmigianino’s Seated woman asleep is a wonderful example of such an informal study surviving from the early 16th century. Drawn approximately 100 years later in around 1625, Guercino’s Child seen from behind retains the remarkable freshness and immediacy of momentary observation (below). Guercino was a compulsive and brilliantly gifted draughtsman. Here the red chalk lends itself perfectly to the play of light on the soft flesh of the child sheltering in its mother’s lap. 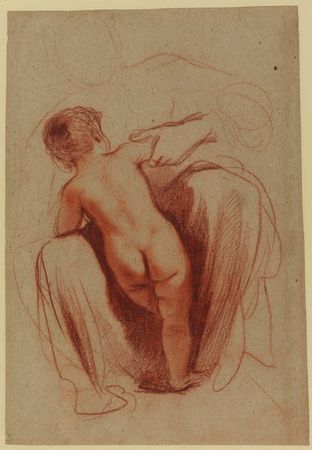 No less appealing in its informality is Rembrandt’s spontaneous and affectionate sketch of his wife, Saskia, sitting in bed cradling one of her children (below). 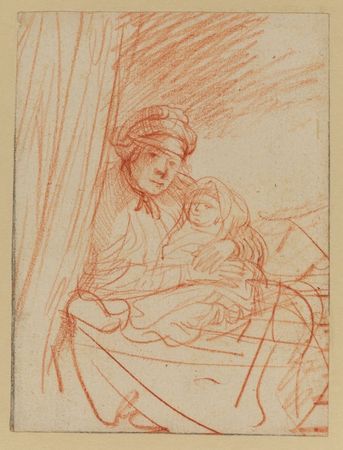 The exhibition offers a striking contrast between this modest domestic image and Peter Paul Rubens’s contemporaneous depiction of his own wife, the beautiful young Helena Fourment (below). Celebrated as one of the great drawings of the 17th century, this unusually large work shows the richly dressed Helena – who was then about 17 – moving aside her veil to look directly at the viewer. Created with a dazzling combination of red, black and white chalks, this drawing was made as an independent work of art and was not intended for sale or public display. In its imposing presence, mesmerising skill and subtle characterisation, it is the equal of any painted portrait. The central role of drawing in artistic training is underlined in a remarkable sheet by Charles Joseph Natoire from 1746. It shows the artist, seated in the left foreground, instructing students during a life class at the prestigious Académie royale in Paris (below). Drawing after the life model and antique sculpture was considered essential in the 18th and 19th centuries. One of the great champions of this academic tradition was Jean Auguste Dominique Ingres. The beautiful elongated forms of the reclining nude in his Study for the ‘Grand Odalisque’, 1813-14, represents the highest refinement of a precise yet expressive linear drawing style rooted in the academy (below). Outside the academy, drawing could offer the artist a means of liberating creativity. Goya’s Cantar y bailar (Singing and dancing), 1819-20, comes from one of the private drawing albums which the artist used to inhabit the world of his dreams and imagination. Canaletto’s expansive and meticulously composed View from Somerset Gardens, looking towards London Bridge is one of several highlights of a section exploring the relationship between drawing and the landscape. This group stretches back as early as Fra Bartolomeo’s Sweep of a river with fishermendrawn in around 1505-09, and also includes a particularly strong selection of landscapes from the golden age of the British watercolour. The interest in landscape is nowhere more powerfully combined with the expressive possibilities of watercolour than in the work of J.M.W. Turner. His late Dawn after the Wreck of around 1841 was immortalised by the critic John Ruskin, who imagined the solitary dog shown howling on a deserted beach to be mourning its owner, lost at sea below). For Ruskin, this was one of Turner’s ‘saddest and most tender works’. The Courtauld collection includes an outstanding selection of drawings and watercolours by the great French Impressionist and Post-Impressionist artists for whom the Gallery is most famous. Apples, Bottle and Chairback is one of Cézanne’s finest late works in any technique (below). Here we see the artist pushing watercolour to its extreme through his extraordinary intuitive but masterful handling of successive layers of coloured washes over luminous white paper. Another highlight of this group is the equally remarkable large crayon drawing by Cézanne’s younger contemporary, Georges Seurat. His standing female nude materialises in an almost unfathomable manner from an intricate web of curving crayon lines (below). The exhibition concludes with work by the two greatest artists of the 20th century, Picasso and Matisse, who reinvented the art of drawing for the modern age. The Courtauld’s drawings collection is largely the result of a series of remarkable individual gifts. They include the drawings presented by Samuel Courtauld alongside his collection of French Impressionist paintings, the bequest by Sir Robert Witt of some 3,000 drawings in 1952, and Count Antoine Seilern’s Princes Gate bequest which, in 1978, brought many of the most famous individual drawings into the collection. Additionally, the works in the exhibition reveal rich and intriguing earlier collecting histories in which artist collectors such as Peter Lely in the 17th century and Thomas Lawrence and Joshua Reynolds in the 18th century feature alongside some of the great princely and connoisseurial collectors of Europe.

Mantegna to Matisse: Master Drawings from The Courtauld Gallery is organised under the auspices of the IMAF Centre for Drawings which was established in 2010 to support the study, conservation and public enjoyment of The Courtauld’s collection. The catalogue accompanying the exhibition has been prepared in collaboration with the Frick Collection and features twenty authors contributing entries on individual works in their specialist areas, often with new technical research undertaken at The Courtauld. Spanning some 500 years, Mantegna to Matisse offers an opportunity to study and enjoy a remarkable array of masterpieces. The exhibition also aims to celebrate the great versatility and diversity of draughtsmanship and invites audiences to consider what makes a master drawing.