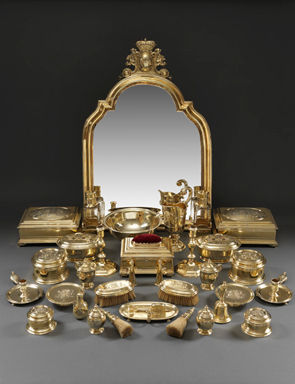 32-piece Toilet Service by Benjamin Pyne of London commissioned in 1708 for the Duchess of Norfolk’s marriage .

LONDON.- Hawkins and Hawkins of Tasmania and Scotland sold the £1.5 million, 32-piece Toilet Service by Benjamin Pyne of London commissioned in 1708 by the Duchess of Norfolk’s father for the marriage of his 16 year old daughter to the Duke of Norfolk, which secured the bride's family a position in the first flight of the English aristocracy.

John Hawkins said “A case could be made for this being the most important surviving complete suite of fully documented Queen Anne silver made by an English silversmith.”

The enormous cost of £701 pounds 18 shillings and 10 pence (about £500,000 in today's money) had to be paid in instalments. When the Duke and Duchess separated in 1729, it was agreed that ‘The Duchess was to have the use of the said jewels and toilet set for her natural life’, it to be returned to the Norfolk’s on her death. This stipulation was complied with and in 1754 the service was returned to Edward Duke of Norfolk the brother of her late husband.

The service went to a private overseas buyer.

The Fair offers works for sale from £50 to £3million. Other sales at London’s most established Fine Art & Antiques Fair included:

· Jeremy Taylor of The Taylor Gallery had the best first day ever at a fair, selling £400,000 worth of 20th Century British paintings to British buyers.

· Julian Bly of Solomon Bly sold two key pieces in the first five minutes of the Fair opening on Thursday.

· Galerie Arabesque from Germany had an excellent start to the Fair, including selling an original Mogul tent window to a private collector.

· Clive Loveless, specialist in tribal art, decided to return to the fair after 10 years and is pleasantly surprised, having sold around 20 pieces in the first few days, including some key pieces to an international interior designer.