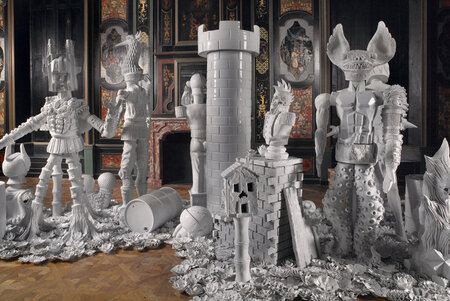 THE HAGUE.- Hans van Bentem (b. The Hague, 1965) uses his unbridled imagination and energy to create a constant stream of artworks, each more brilliant, coruscating and colourful than the last. His breathtaking installations are informed by influences he sponges up from around the world and the exciting and eclectic oeuvre that results features elements as diverse as robots, lotus flowers, a Kalashnikov and a phallus. His art is designed first and foremost to elicit emotion. In this respect, the artist himself claims to be ‘a romantic, primarily in search of the beautiful.’ He operates entirely autonomously and independently in the contemporary art world of today.The forthcoming exhibition showcases the results of an artistic career that spans almost a quarter of a century. Van Bentem’s wonderful installations are displayed in the Gemeentemuseum’s period rooms: the ideal setting for an unprecedented encounter between the present and the past, and between east and west. 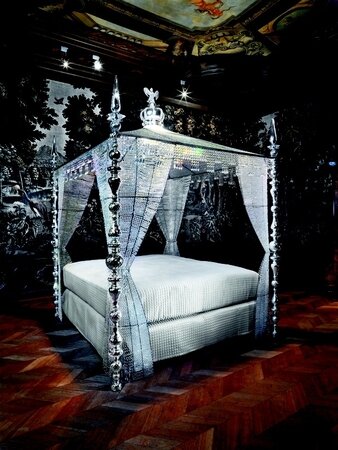 The Gemeentemuseum is one of the few fine arts museums in the Netherlands to possess a suite of authentic period interiors. Whereas most such period rooms in Dutch museums disappeared in the 1960s and ’70s, this suite has survived intact ever since the museum opened in 1935. The Gemeentemuseum has taken the unusual decision to use it as the setting for a series of innovative exhibitions in which contemporary art enters into a dialogue with the historic interiors. The first was held in 2001, when the renowned Dutch artist and writer Jan Cremer used his trademark silver Harley Davidson and other props to create an evocation of the early ’60s in a show entitled A Barbarian in The Hague. He was followed by top Dutch designer Ineke Hans. Now, for the summer of 2012, Hans van Bentem has filled the half-dozen period rooms with six different installations. The first of the spaces houses his Table of Seductions, a table made entirely of traditional Makkum earthenware and bearing dishes adorned with portraits of seductive couples – a piece in which it is immediately clear that all sorts of things are going on. The installation in the Louis XV Room is completely different: a ‘wild’ assemblage of wooden objects created in collaboration with local artists in Senegal. Meanwhile, the Gobelin Room features an object of which most people can only dream: a crystal four-poster bed entitled Heaven. With lights that gradually come on and go out as day changes to night, the bed is Van Bentem’s idea of the ultimate chandelier. Finally, the imitation lacquer interior of the Japanese Room provides the perfect setting for a gleaming installation of pure white Chinese porcelain sculptures of various body parts on a bed of lotus flowers, stones and lumps of rock. 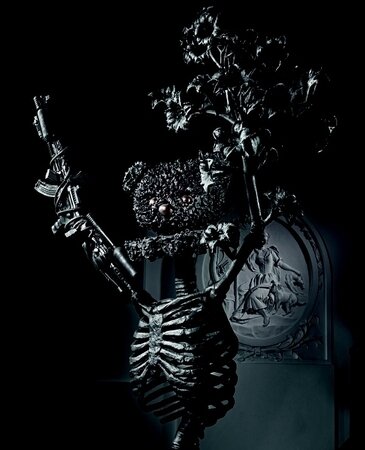 Van Bentem graduated in 1988 from the Royal Academy of Art (KABK) in The Hague after specializing in monumental design. His main initial interest had been in painting but later he familiarised himself with other materials. He has since travelled the world in search of local craft skills: to the Czech Republic for crystal, to Senegal for wood and to China for porcelain and bronze. Van Bentem’s creativity was initially stimulated by the punk movement. A born rebel, he turned his back on society in order to create his own world. Now, however, he displays a strong sensitivity to the intended sites for his commissioned works. For example, the series of chandeliers he designed for The Hague’s Escher in het Paleis Museum incorporate allusions both to the history of the building – a former royal palace – and to the gifted artist M.C. Escher, whose work is now displayed in it. So Van Bentem is not just a dreamer: he turns his dreams into reality. The exhibition is accompanied by a lavishly illustrated Dutch-English book of the same title. Keep on Dreaming (ISBN: 978 94 91196 19 5) is written by Titus M. Eliëns and published by Uitgeverij de Kunst at € 39.95. 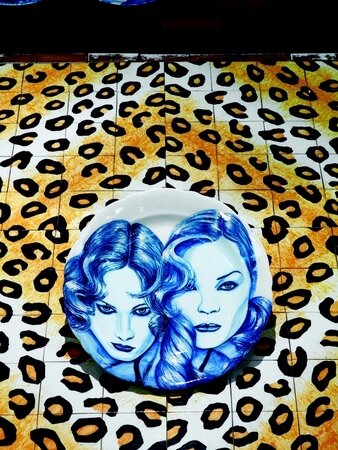