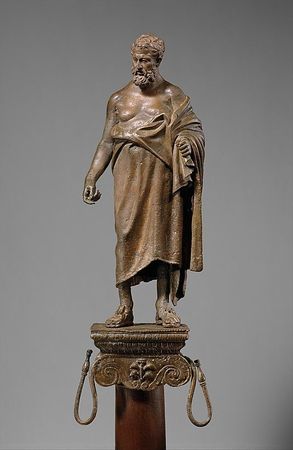 Adaptation of a Greek statue of the 3rd century B.C.

Among the preserved monuments of ancient art, there is no more sympathetic portrait of the Greek intellectual than this bronze statuette of a philosopher. The individualized appearance of the entire figure, and the successful portrayal of a thoughtful visage in particular, link this image with the philosopher portraits that became popular early in the Hellenistic period.

The subject of this portrait can be identified as a member of the Epicurean school of philosophy. Epicuros (341-270 B.C.) and his followers believed that in the uncertain circumstances of the world, each man should seek to attain pleasure and peace in his life, but that effort must be guided by the principles of moderation and harmony with nature. Epicuros's writings enjoyed great popularity during his life and after, and he was especially beloved in Rome. By the late first century B.C., the Epicurean attainment of pleasure applied mostly to eating and drinking, and the principle of moderation was less significant, as is evident in the proudly displayed fat belly and uninhibited self-satisfied demeanor of this portrait. Two hooks attached to the Ionic capital on which the figure stands would have served to suspend lamps. The fact that this figure was the crowning element of a lamp stand may well indicate that this statuette is not a true portrait but rather a typical Epicurean of the first century B.C.