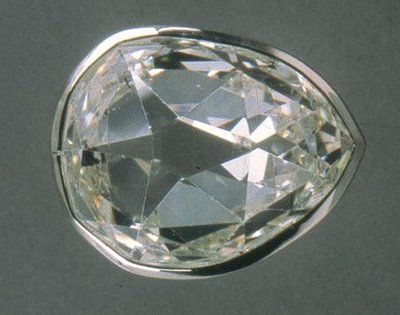 The Sancy Diamond a very interesting & colorful history. It is colorless, with a very faint greenish-yellow tint 55.23-carat shield-shaped stone.

The stone was purchased in Constantinople in 1570, by the French Ambassador to Turkey, the Seigneur de Sancy, who was a collector of gems and jewelry. He brought it to France, where Henry III, who was sensitive about being bald, used it to decorate a small cap he always wore to conceal his baldness.
During the next reign, when Sancy was made Superintendent of Finance, Henry IV borrowed the gem as security for substantial loan to hire soldiers. A messenger was dispatched with the jewel but never reached his destination; thieves had followed him. Knowing that the man was loyal, Sancy searched for him and his body was discovered, disinterred, and in the stomach of the servant they found the diamond!
It was then sold back and forth, it was in England and ended up in the hands of Cardinal Mazarin whoacquired it in a shady deal and then handed it over to Louis XIV along with many other gems. It was also stolen in the heist of 1792 and was missing for quite some time. It reappeared in 1828 and was sold by a French merchant to Prince Anatoly Demidov of Russia.
In 1906, the Sancy was purchased by Viscount William Astor (1st Viscount Astor) as a wedding gift when his son Waldorf Astor (2nd Viscount Astor) married Nancy Langhorne of Virginia. Lady Astor often wore the big shield shaped gem in a tiara on state occasions. Lady Astor holds the unique distinction of being the first woman to sit in the British House of Commons, being elected to Parliament on November 28 , 1919. In 1962 the Sancy diamond featured prominently at the "Ten Centuries of French Jewelry" exhibition held at the Louvre Museum. When Lady Astor died in 1964, the Sancy was inherited by her son the 3rd Viscount Astor, and remained in the Astor Family until 1976. Finally the Louvre Museum of France purchased the Sancy from the Astor Family in 1976, for an undisclosed sum , in a deal financed by the Banque de France.
Posté par : Alain Truong à 22:47 - Joaillerie /Jewelry - Commentaires [0] - Permalien [#]
Tags : Sancy Diamond