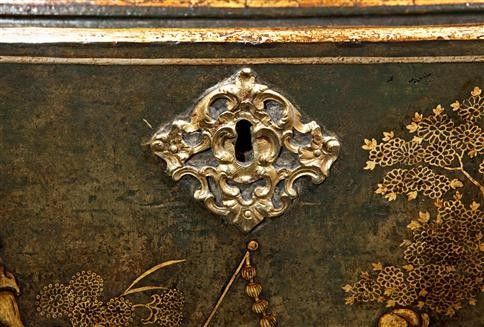 decorated throughout with gilt chinoiseries on a green ground, the cresting in the form of a broken swan's neck pediment. The upper section has two doors fitted with shaped mirror plates of traditional Grendey form which open to reveal,on the reverse, large scale Chinese figures and an interior fitted with small pigeon holes, bookshelves and drawers, with a pair of candle slides below; the fall front bureau section enclosing further drawers and pigeon holes. Below are two drawers in the frieze above four long graduating drawers, each retaining the original elaborate brass handles; the whole standing on bracket feet. The cresting and the mirror plates of a later date. The lacquer restored in places. H: 98.4 in (250.0 cm). W: 42.1 in (107.0 cm). L/D: 22.8 in (58.0 cm)

Monique Riccardi-Cubitt, 'The Art of the Cabinet', Thames & Hudson, London, 1992.

Notes: Giles Grendey (1693-1780) completed his apprenticeship and became a freeman in 1716; by 1726 he had his own apprentices and was recognised as the most accomplished English cabinetmaker incorporating ‘japanned’ decoration. In 1731, it was recorded that Grendey's workshop had a fire which destroyed ‘furniture to the value of £1,000 pack'd for Exportation against the next morning’. Fortunately, premises and stock were both insured, but this record underlines the importance of the export market for his business; notably in Spain, in Italy (for the King of Naples) and in Portugal.

Grendey’s most celebrated export order was for a suite of approximately eighty items of scarlet japanned furniture for the Duke of Infantado's castle at Lazcano, near San Sebastian in Northern Spain, circa 1740. A large number of items from this suite have been sold through Mallett and are now in several important international collections including The Metropolitan Museum, New York and The Victoria and Albert Museum, London. Grendey's label does not occur on every item but the entire ensemble can confidently be ascribed to his workshop.

A sufficiently large body of furniture has been identified, with and without trade labels, to encourage attribution of this bureau bookcase to Grendey on the grounds of stylistic analogy. Grendey's furniture is typically fitted with doors having shaped mirror plates or shaped panels of exceptional mahogany veneers. The generous proportions, architectural pediment, elaborate brass handles and bracket feet may also be related. Grendey’s interpretation and technical rendering of chinoserie motifs further supports the attribution with a caravan of camels and figures within an architectural setting on the fall front, the fantastical animals on the lower section and the elegant large-scale figures on the inside of the upper doors and to the sides. http://www.mallettantiques.com