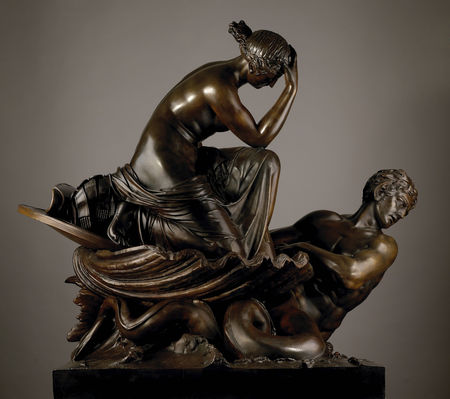 LONDON.- Tomasso Brothers Fine Art, the internationally-renowned dealers in European sculpture, will be exhibiting at Frieze Masters, a new art fair in Regent’s Park, London, from 11 to 14 October 2012 staged to coincide with Frieze Art Fair which concentrates on contemporary art. Frieze Masters will feature some ninety of the world’s leading galleries and aims to give a contemporary perspective on the relationship between old and new art, from ancient times to the 20th century. The two fairs will make London in October the focus for an international art audience and it is hoped both will benefit from a crossover between enthusiasts of contemporary and older art.

The highlight of the Tomasso Brothers stand will be a major bronze of Thetis returning from Vulcan with the armour of Achilles by William Theed the Elder (1764-1817), almost certainly supplied to the author, philosopher, interior designer and art collector, Thomas Hope (1769-1831) for Duchess Street, London, or his country house Deepdene in Surrey. Taken from Homer’s Iliad, this remarkable, almost life-size, bronze depicts the ‘divine Thetis of the silver feet’, most famous of the Nereids, kneeling by the shield of her son Achilles with the hero’s armour in a giant cockle shell. The youthful Triton, surrounded by waves, swims forward pulling Thetis’ shell with him. (price in the region of £450,000)

William Theed was born in London and entered the Royal Academy Schools in 1786. He went to Italy in 1790, returning in 1796. He began his artistic career as a painter but was befriended by the sculptor John Flaxman whilst in Rome and took up sculpture. Flaxman’s designs for Homer’s Iliad clearly made a powerful and lasting impression on the young Theed. Following Flaxman’s example, he supplied models for ceramics to Josiah Wedgwood in Stoke and for metalwork to Rundell and Bridge, the silversmiths in London.

This spectacular sculpture is described by Sir Timothy Clifford as ‘undoubtedly Theed’s most ambitious work’. Theed exhibited a small wax model of it at the Royal Academy in 1805 and its subject would have had huge contemporary resonance as it was probably modelled in the dark days of late 1804/5 when Britain’s navy was pitched not only against the fleets of Napoleonic France but also those of Spain. The British Isles was in imminent danger of invasion, so Achilles’ heavenly armour arriving at the hour of need would have had a strong symbolic message. Theed exhibited a similar-sized bronze in 1812, probably identical to the group in the collection of H.M. The Queen at Windsor, and others continued to be cast by Rundell, Bridge and Rundell as late as 1829. Also making a visual impact at Frieze Masters will be an important pair of 18th century Italian carved imperial porphyry vases and covers standing 1 metre high. These magnificent and monumental vases, related to a pair in the Musée du Louvre, were inspired by 17th century prototypes which were cut in Rome, often from French designs. Imperial porphyry was mined by the ancient Egyptians and Romans at Mons Porphyrites in Egypt. The mines ceased working in classical times, therefore almost all of the post-antique objects, including these vases, are likely to have been cut from ancient Roman columns. An impressive 17th century Roman white and polychrome marble bust of a young nobleman, possibly Marcantonio II Colonna, Captain General of the Holy League at the Battle of Lepanto in 1571, has recently been identified as being by Francesco Caporale, known as Il Soncino (active 1606-c.1635). The splendid bust in lavishly coloured marble of a handsome young man in the guise of a Roman emperor seems to be unpublished and, until recent research undertaken by Tomasso Brothers, unattributed. The use of coloured marble, the drapery, the treatment of the Medusa-mask on the cuirass are all similar to the features on a bust of Antoninus Pius (with an ancient head) in the Colonna Gallery in Rome. It is now believed that Caporale, who is recorded in the Colonna archives notably for his activities as a dealer in and restorer of antiquities, was the author of both busts. Caporale’s best-known work is a bust of Antonio Manuel, Marquis of Ne Vunda, a diplomat from the Congo, made in 1610-11 for his tomb in the Baptistry of Santa Maria Maggiore. It is possible that the bust may have emanated from the collection in Palazzo Colonna, or from another of their properties, and therefore constitutes a major addition to the iconography of one of the most prominent of Roman families. Marcantonio II Colonna (1535-1584) was a celebrated soldier who, at the age of only 36, led the Christian forces of the Holy League to a spectacular victory over the Turks at the Battle of Lepanto on 7 October 1571. He was accorded a triumphal entry into Rome and various statues of him were erected. In a gloriously coloured fresco of The Battle of Lepanto in the centre of the ceiling of the Great Hall in Palazzo Colonna by Giovanni Coli and Filippo Gherardi of 1675-78, the hero is depicted as young, slim, handsome, clean-shaven and golden-haired, just like the subject of the present bust.

Visitors to Frieze Masters and the stand of Tomasso Brothers Fine Art will not fail to be impressed by the powerful presence of the sculptures on display which resonate as much today as when they were first created.