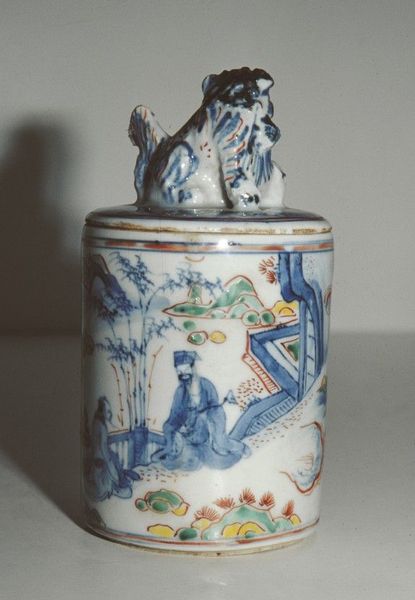 This is an example of blue and white porcelain probably made for export to Japan. Blue and White porcelain in China came about as a result of the combination of the Chinese porcelain tradition with the trade in cobalt blue from Persia. Porcelain is a hard white ceramic composed of white-china clay, called kaolin, and refined porcelain stone, or petuntse. When fired together, these materials fuse to create a hard, vitrified ceramic. Blue and White porcelain is the successor to the Chinese Qingbai and Shufu traditions that preceded it, or ceramics with a white glaze and a slightly blue or blue-green tint. To achieve the Blue and White decorative style, cobalt underglaze is applied to the porcelain; it is then covered in clear glaze and fired. Cobalt was used by Persian potters for centuries before its import to China. It was introduced in approximately 1325 A.D. through with Persian merchant communities established along the Chinese coast. Following the introduction of this new, exotic decorative style, the city of Jingdezhen, known as the porcelain capital of China, began producing Blue and White porcelain wares with imported cobalt. By the middle of the sixteenth century, trade with Japan stimulated production of porcelain wares with cobalt underglaze.