LONDON- This November will be the first time that Eskenazi has staged an exhibition solely devoted to Qing porcelain. Simply entitled Qing porcelain from a private collection, it comprises twenty superb imperial pieces which will be on show at Eskenazi Ltd., 10 Clifford Street, London W1 from Thursday 1 to Friday 23 November 2012. From a collection assembled in Europe in the 1980s and 1990s, the pieces are not only the finest examples of their types but also have impeccable provenances, from such famous collections as J.M. Hu, T.Y. Chao and Paul and Helen Bernat. Dating predominantly from the reigns of the three most important Qing emperors – Kangxi (1662-1722), Yongzheng (1723-1735) and Qianlong (1736-1795) – these imperial works epitomise Chinese taste and have always been highly prized.

The early to mid-Qing period saw a renaissance in ceramic technology coupled with imperial supervision of the kilns at Jingdezhen. Alongside the technical advances made in the Yongzheng and early Qianlong periods, and equally important, was the interest of both emperors in antiquity. Indeed, from the time of the Manchu conquest of China and the founding of the Qing dynasty in 1644, the emperors promoted themselves as ‘guardians of the past’, having inherited from their Ming predecessors the vast palace art collection amassed over a period of 1,600 years.

The object that most embodies the aesthetic and technical achievements of the mid-Qing period is the famille rose pear-shaped vase with imperial Qianlong mark. Only 22 cm high, it is finely painted with lotus blooms and scrolling leafy vines with buds and flowers. The striking combination of pinks, greens, blues, yellows and white is set against a rich ruby sgraffito ground. This bravura piece was undoubtedly made for the emperor himself and not as a gift. Such elaborately decorated famille rose vessels were produced under the direction of Tang Ying, the Qianlong emperor’s celebrated supervisor at Jingdezhen, and their manufacture was a laborious process typically needing at least eight separate steps including three firings. Of the greatest rarity is a chrysanthemum-form teapot, Yongzheng mark and period, its copper-red and blue glaze paying homage to the purple-splashed Jun wares of the Song and early Ming periods. The chrysanthemum, symbol of autumn and the ninth lunar month in China, represents longevity and was a favoured motif during the Qing period. There appear to be, however, only two other published Jun-type teapots of this form, one in the Palace Museum, and the other in the National Museum of China, both in Beijing. The Yongzheng emperor was especially fond of Jun wares and encouraged the ‘revival’ of Jun glazes. Records show that he oversaw every stage of the production of such prized ceramic pieces as this teapot, even down to specifying the glaze. 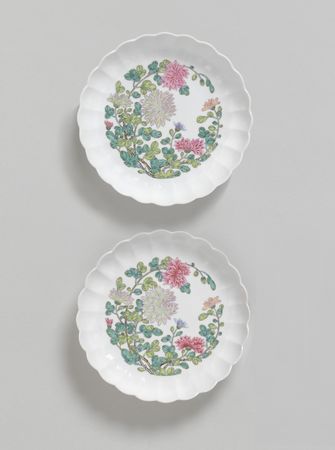 The chrysanthemum was also the inspiration for the shape and decoration of a pair of famille rose dishes, bearing Yongzheng marks and of the period. Each dish is delicately painted with blooms of this flower picked out in pink, green, yellow, white and blue enamels, the stems in tones of grey-green and yellow-brown, and the leaves and buds in shades of green. Made under the same emperor is a rare pair of waterpots, painted in a different palette known as doucai, first developed in the 15th century and prized by the early Qing emperors for that reason. The design is of layered, swirling clouds in underglaze blue filled with yellow, aubergine, green and red enamels and, like the shape of the vessels, is very much of its own time. A pair of underglaze blue and pink enamelled porcelain ewers with gilded edges, bearing Qianlong marks and of the period, 1736-1795, were inspired by Tibetan Buddhist ritual metal vessels. While the Qianlong emperor showed interest in all the major religions in China during his lengthy reign, he was a devotee of Buddhism, particularly as practised in Tibet. The body of each vessel is beautifully painted with lotus blooms in a very unusual and striking combination of puce pink and underglaze blue, the sinuous spouts issuing from the jaws of a pink enamelled makara, the protective fish-dragon. The lotus and makara have Buddhist connotations, the former a symbol of the purity of the re-born soul and the latter representing the water-giving element. An underglaze blue porcelain double gourd vase, also Qianlong mark and period, makes reference to Daoism, its shape indelibly associated with the Immortal, Li Tieguai, who carried the elixir of immortality in a double gourd hanging from his belt. The elongated waisted form of this particular vase, with its exaggerated ear-shaped handles, is specific to the Qianlong period and very rare in blue and white. Another great rarity is a flask, Qianlong mark and period, decorated on each side in iron-red enamels with a rampant, five-clawed dragon chasing a flaming pearl among underglaze blue clouds and waves. The dragons are painted with such precision and detail that they almost spring off the vessel.

Almost none of these choice Chinese porcelains have been seen in public in the past twenty years or more and so the exhibition offers visitors a rare opportunity to view at close hand great works of art that would add lustre to any museum collection. Although intended for use in the confines of the Chinese court, or even specifically for the emperor himself, they have always held enormous appeal for those outside such august society. They were, and continue to be, treasured worldwide.

The exhibition will coincide with the 15th Asian Art in London, 1 to 10 November 2012, an annual event that unites London’s Asian art dealers, major auction houses and societies in a series of selling exhibitions, auctions, receptions, lectures and seminars attracting visitors from around the globe.