NEW YORK, NY.- On September 12, Bonhams New York will hold its inaugural Chinese painting and calligraphy auction featuring a selection of excellent examples spanning the 14th century to 2005. Comprised of over one hundred works on paper and silk the sale will commence with a number of early classical treasures.

Opening for preview on September 8, collectors and connoisseurs will be enjoy a charming fan painting of a buffalo and calf datable to the fourteenth century (pre-sale estimate $12,000-15,000), 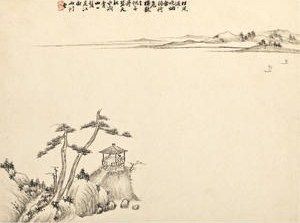 Yao Song (18th century) & Cheng Tang (18th century), Landscapes. Ink and light color on paper, three album leaves by Yao Song, one with a poetic inscription, followed by three rectangular relief seals of the artist reading Yao Song repeated once and Yemou, together with one album leaf by Cheng Tang, with a poetic inscription, followed by one rectangular relief seal of the artist reading Yuhu. The three Yao Song leaves 9 x 7 1/2in (22.86 x 19cm) each, the Cheng Tang 7 3/4 x 10 1/2in (19.7 x 26.7cm) (pre-sale estimate $10,000-15,000). Photo Bonhams

Cheng Tang, who used the zi Yuhu, was also a Xin'an school artist active in the 18th century, however his landscapes were influenced by the paintings of Shen Zhou. Likely to date from the second half of the seventeenth century, this sublime depiction of Guanyin of the South Sea (Nanhai Guanyin) is nearly identical to a composition created in 1593 on the commission of Empress Dowager Li Cisheng, the mother of the Wanli Emperor (reigned 1573-1619) and a generous imperial patron of Buddhist imagery in the late Ming Dynasty. The earlier example--acquired by the Metropolitan Museum of Art, New York in 1918--has been interpreted as the celebration of two miraculous events that occurred in 1586 and 1587 and as a conveyance of both an imperial and Buddhist message.

The current lot, over twice as large as the earlier Metropolitan example, depicts a bejeweled Guanyin leaning over an ornate balustrade above a blossoming lotus pond. The boy pilgrim Shancai stands on a lotus leaf in adoration below, and behind the principal figure a white parrot is perched on a magnificently contorted garden rock, as bamboo winds its way through the stone's perforations. The implications of reading the garden rock as a mountainous landscape--in this case Putuo, the home of Nanhai Guanyin--is further enforced by the surreal multicolor clouds that hover at the top of the composition and endow the scene with an otherworldly demeanor. Although the same composition was also carved into stone and set up at Beijing's Sheng'an Monastery four years earlier in 1589, it is likely the artist of the current composition was working from the 1593 Metropolitan example due to the resemblance of the subtler details that are not evident from the stone carving or the rubbings. That said, the current lot differs from the 1593 example at several points. Shancai is somewhat larger; the treatment of the wood grain on the baluster appears more pronounced and naturalistic; and greater attention is paid to Guanyin's robe, not only in the floral collar, but in the depiction of the gauze, which not only exposes the jeweled arm of the goddess, but her hand that holds a rosary.

For a discussion on the Metropolitan example， see: Marsha Weidner, "Imperial Engagements with Buddhist Art and Architecture" in Cultural Intersections in Later Chinese Buddhism, University of Hawaii Press, Honolulu, 2001, pp 128-129; and Marsha Weidner ed., Latter Days of the Law, Spencer Museum of Art, Kansas, 1994, cat. no 47.

A majority of the works of art offered in the sale are fresh to the market, coming from collections of legendary figures as Walter Hochstadter, Senator Theodore Francis Green, and C. C. Wang. There are several strong calligraphic works featured in the sale, including: Qing dynasty masters such as Zheng Xie (1693-1765) (pre-sale estimate $60,000-90,000) (top), 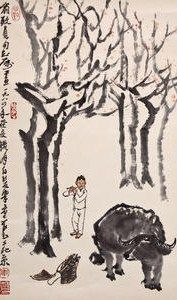 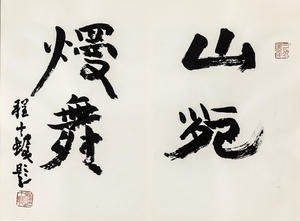 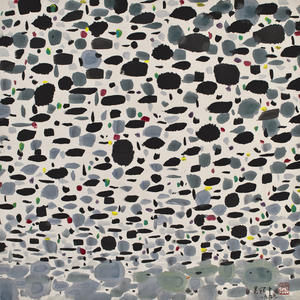 The subject of the recent exhibition Revolutionary Ink: the Paintings of Wu Guanzhong at Asia Society, New York (co-organized with the Shanghai Museum of Art), Wu Guanzhong continues to be studied and acknowledged as one of the most important artists of the twentieth century. The current lot is an excellent example of his abstracted landscapes created after 1990. Composed of harmoniously proportioned shapes which create a dense, dynamic pattern, the painting reveals the artist's innovative palette which includes vivid yellow, bright green, deep russet, and even purple and orange.