Dramatic images of apocalypse, death, devils and witchcraft at the National Gallery of Victoria

Dramatic images of apocalypse, death, devils and witchcraft at the National Gallery of Victoria MELBOURNE.- Dramatic images of apocalypse, death, devils and witchcraft feature as part of a fascinating look into early European thought in The Four Horsemen: Apocalypse, Death and Disaster, opened at the National Gallery of Victoria on 31 August.

Cathy Leahy, Senior Curator, Prints and Drawings, NGV, said, “The exhibition draws its title from the Four Horsemen of the Apocalypse: conquest, famine, war and death. The motif of the Horsemen was a familiar one in the late Middle Ages and Renaissance, a period in which natural phenomena and events were seen as manifestations of divine providence and people interpreted disasters and disease as warnings or punishments from God. The exhibition brings to life the dramatic visual imagery from a time of great chaos and upheaval.”

The illustrated books, prints, manuscripts and paintings in the exhibition are predominantly drawn from the works of the NGV, including its internationally renowned Dürer collection. The exhibition also includes key loans from the State Library of Victoria and the Special Collections of the Baillieu Library, University of Melbourne.

Dr Petra Kayser, Curator, Prints and Drawings, NGV, said, “This was a period when the plague, famine and war were affecting the majority of the population in Europe and death could strike on a massive scale at any time. These circumstances led to a different awareness of mortality which is reflected in the visual culture of the period. Many images in The Four Horsemen, including book illustrations by Michael Wolgemut and prints by Hans Holbein, show Death personified as a skeleton, seizing individuals from all levels of society in the ‘Dance of Death’.” 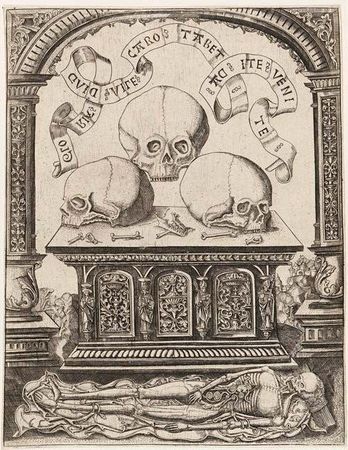 Commentaires sur Dramatic images of apocalypse, death, devils and witchcraft at the National Gallery of Victoria