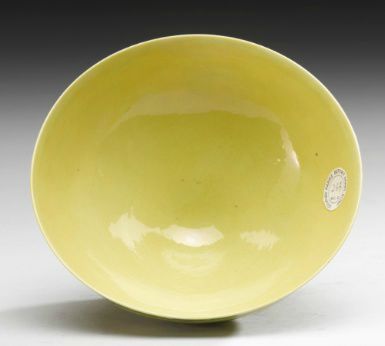 of steeply rounded form supported on a slightly splayed foot, incised around the exterior with twelve iron-red bats in flight, each holding a pale green double-gourd suspended from a blue ribbon in its mouth, on a ground of swirling green clouds with incised detailing, between interlinked ruyi-heads around the rim and a band of upright lotus petals around the foot, all against a bright yellow ground extending into the interior, six-character mark in underglaze blue within a double circle. Diameter 5 7/8 in., 14.9 cm - ESTIMATION 50,000-70,000 USD

NOTE DE CATALOGUE: A Yongzheng bowl of this design in the Palace Museum, Beijing, is illustrated in Kangxi, Yongzheng, Qianlong. Qing Porcelain from the Palace Museum Collection, Hong Kong, 1989, p. 238, pl. 67; another from the Constantinidi Collection is included in Soame Jenyns, Later Chinese Porcelain, London, 1951, pl. LXIX, fig. 3. Another bowl with the same design and size from the Collection of the British Rail Pension Fund was sold in our London rooms, 16th May 1989, lot 78, and another in our Hong Kong rooms, 25th April 2004, lot 231.