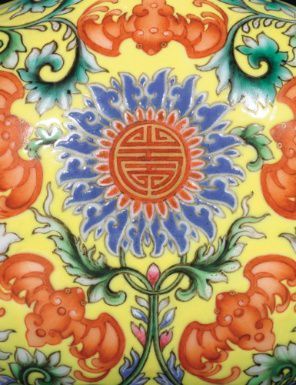 each exquisitely potted, of flattened double-gourd form with a slender upper bulb resting on a compressed lower body and short slightly splayed foot, set with two delicate loop handles with arrow-shaped terminals, masterfully enamelled against a rich yellow ground, the lower bulb with a central rosette formed of an iron-red shou medallion reserved either on a gold or white ground, encircled by a row of small pink pointed petals and a blue-enamelled corolla of longer scrolling blades, all within a circle of five confronting iron-red bats, further wreathed by scrolling feathery leaves borne on interlocked undulating stems climbing towards the neck, the foliage painted in complex shades of green with attendant buds and occasional pale blue, iron-red or rose-pink leaves, the sides and the upper bulb similarly decorated with shou medallions encircled by short pointed petals, either pale blue or pale green, and a starburst of longer pink-enamelled scrolling blades, all wreathed by feathery scrolls, the handles picked out with a three-floret spray, one vase with a blue floret between a pale red and a pink flower, the other with a central pink flower, between an orange and a blue blossom, the foot encircled by a band of pendent pink ruyi centred with a yellow dot and finely outlined with a blue enamel fringe against a yellow ground, the rim and footring gilt, the underside of the handles, the interior and the base glazed in soft pale turquoise, the base inscribed with a six-character seal mark in underglaze blue within a square panel reserved in white on the turquoise ground, carved wood stands; 17.7 cm., 7 in. Estimation: 40,000,000 - 60,000,000 HKD

NOTE DE CATALOGUE
Qianlong Emperor’s Auspicious Wufu Vases
Hajni Elias
The present pair of vases is remarkable for its splendid decoration and eye-catching double-gourd form. Every aspect of the design, delicately painted with an impressive array of colours, conveys an auspicious message and is filled with lucky symbols. On each side, the large open-winged bats, painted in striking iron red, are carefully positioned to encircle the shou medallions in the centre of the body and surrounded by carefully shaded floral scrolls which appear to be climbing towards the neck. The shading and overlapping of different colours, as well as the arrangement of the composition on a double-gourd form required formidable organization and skill from the artist.

The bats echo those seen on a Qianlong mark and period revolving double-gourd vase, painted in the yangcai enamels, where the bats can be seen flying amongst clouds, included in the National Palace Museum exhibition Stunning Decorative Porcelains from the Ch’ien-lung Reign, Taipei, 2009, cat. no. 67. Interestingly, in Chinese design, gourds and bats are frequently grouped together and appear to form a pattern, even if one is present in the shape and the other in the decoration. Bats, shou medallion and floral scroll are also main design elements found on a yellowground bottle form vase included ibid., pl. 32, from the collection of the National Palace Museum, Taipei.

Red bats (hongfu) convey the message of ‘vast blessings’ as the word for bat in Chinese is fu, meaning riches and blessing, and the word red is hong which also means ‘vast’. Five bats (wufu) represent the ‘Five Blessings’ of old age, wealth, health, love of virtue and a peaceful death. Bats and the shou medallion together convey the message of ‘may you possess both blessings and longevity (fushou shuangquan) with the bat standing for blessings and the shou character symbolizing longevity. The handles in the shape of ruyi sceptres convey the message ‘as you wish’ or stand for the wish-granting wand, while the double-gourd shape emulates the bottle gourd a pun for ‘blessings and ‘emolument’. For further reading on the meaning of symbols in Chinese art see Teresa Tse Bartholomew, Hidden Meanings in Chinese Art, San Francisco, 2006. These vases, with their fine potting, splendid decoration rich in auspicious symbolism, would have been a perfect birthday or wedding gift for the Emperor or one of his family members.

These vases belong to a select group of pieces known as yangcai porcelain that are closely associated with the aesthetic taste of the Qianlong emperor and the achievement of Tang Ying, supervisor of the Imperial kilns at Jingdezhen. According to the study of Liao Pao-Show, ‘On Yang-ts’ai Porcelains of the Ch’ien-lung Reign’, StunningDecorative Porcelains from the Ch’iern-lung Reign, National Palace Museum, Taipei, 2009, p. 32, they are wares that were made during a short period, between the fifth and ninth years of Qianlong’s reign (1740-1744), demonstrating the emperor’s confidence in the early stages of his rule. The term ‘yangcai’, used officially by the Qing court as well as the emperor himself, indicates a link with the West, specifically the influence of techniques borrowed from paintings such as the application of Western-style shading, use of white pigment to show light and shadow and special Western-style floral compositions, much of which can be seen on the decoration of these vases.

Qianlong was not only fond of yangcai pieces, but considered them to be examples of the technical and artistic innovations of his reign. While utilitarian vessels, such as bowls and teacups, were fired in mass quantities, larger vases were limited in number. Those that can be found in pairs, including the present example, are even more special. Liao further notes, ibid., p. 35, that ‘the vast majority of those [yangcai porcelain] that were fired successfully were stored in the Ch’ien-ch’ing-kung Palace [Qianqing Gong or Palace of Heavenly Purity], although a few were put on display at the Yuan-ming-yuan garden in the Summer Palace’. Another important aspect of yangcai porcelain is that they were made for imperial use and not as gifts from the court. This is confirmed by the Qing Court inventories of the Qianqing Gong that was the Emperor’s main residence and where the majority of yangcai pieces were stored.

A slightly taller vase of the same shape but covered in a deep-blue glaze and painted in gilt with a combination of auspicious design elements, in the collection of the National Palace Museum, Taipei, was included in the museum’s Special Exhibition of K’ang-His, Yung-cheng and Ch’ien-Lung Porcelain Ware from the Ch’ing Dynasty in the National Palace Museum, Taipei, 1986, cat. no. 78. It is also comparable with blue-and-white vases of related flattened doublegourd body painted on either side with a shou medallion flanked by two descending three-clawed dragons, the handles similarly in the form of ruyi sceptres and bearing a Qianlong reign mark and of the period. For example, see one published in the Illustrated Catalogue of Ch’ing Dynasty Porcelain in the National Palace Museum: Ch’ien-lung and Other Wares, vol. II, Tokyo, 1981, pl. 3; another, from the Qing Court collection and still in Beijing, included in The Official Kiln Porcelain of the Chinese Qing Dynasty, Shanghai, 2003, pl. 277; and a third example sold in these rooms, 30th October 2000, lot 192. A much taller Qianlong vase of related shape decorated with dragons and clouds in underglaze-blue and red on a yellow-ground, from the collection of M. Calmann, Paris, was included in the International Exhibition of Chinese Art, the Royal Academy of Arts, London, 1935-6, cat. no. 1760.

The vases are from the collection of Mrs. Christian Holmes (1871-1941) (fig. 1), née Bettie Fleischmann, born in Cincinnati, Ohio, to Charles Fleischmann and Henrietta Robertson. Mrs. Holmes' father, together with her uncle Maximilian, were responsible for commercially produced yeast that revolutionized the way people baked and was the basis for today's mass production and consumption of bread. In 1892, she married Dr. Christian Ramus Holmes (1858-1920), son of a Danish miller and a specialist in diseases of the eye, ear, nose and throat. Dr. Holmes was permanent chairman of the New Hospital Commission of Cincinnati and was the leader in the movement that led to the establishment in Cincinnati of one of the finest modern general hospitals in the nation.

Following her husband's death, Mrs. Holmes moved to Sands Point, Lewis in Long Island, New York, where she built her famous residence called 'The Chimneys', designed by the architect Edgar Irving Williams and completed in 1929. Mrs. Holmes was a noted philanthropist and a prominent figure in the Women's Organization for National Prohibition Reform. She actively supported many academic and musical institutions such as the New York Philharmonic and the Metropolitan Opera Guild, being a patron for both organizations. She owned a splendid art collection, which included Chinese archaic bronzes and ceramics (fig . 2). Her bronzes are published in the catalogue titled Selected Ancient Chinese Bronzes from the Collection of Mrs. Christian Holmes. (For further information on Mrs. Holmes see Roy Davids and Dominic Jellinek, Provenance, 2011, pp. 239-40.).