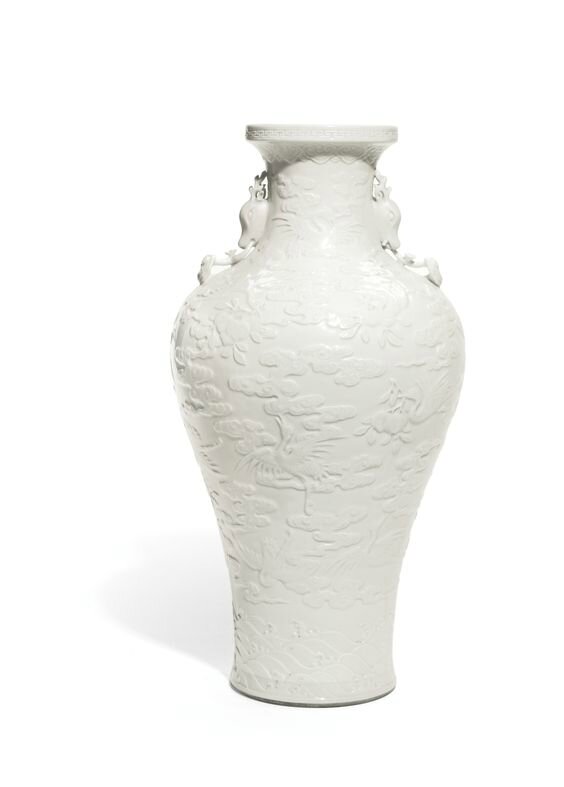 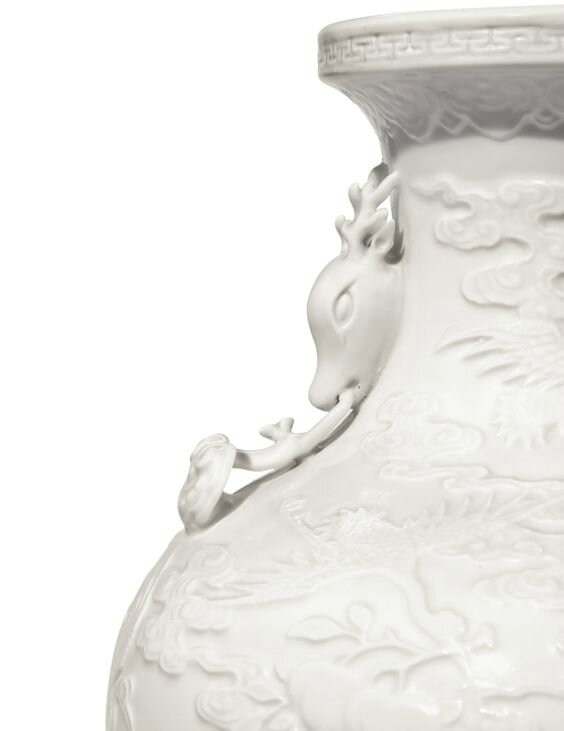 the baluster body surmounted by a waisted neck and galleried rim, flanked by a pair of deer handles each grasping a sprig of lingzhi in its mouth, the body carved in low relief with cranes in flight amongst trailing clouds, some clutching fruiting peach branches in their beaks, all above turbulent breaking waves and below pendent ruyi heads, the rim encircled with a keyfret band, covered overall with a creamy white glaze, the base inscribed with a six-character Qianlong mark.

NOTE DE CATALOGUE: The present impressive vase belongs to a special group of Imperial porcelain wares made during the reign of the Qianlong emperor (1736-1795) that is referred to in Chinese as ‘fang Ding yao’ or ‘in imitation of Ding ware’ after the deep opaque white glaze reminiscent of the much celebrated official ‘Ding’ wares of the Song dynasty (960-1279). However, among the vessels from this group, this vase is especially fine for the beautifully executed relief decoration. The artist has paid close attention to every detail, as shown in the depiction of the cranes’ feathers, the peaches with the small dots displaying their ripeness, the naturalistic organic form of the ruyi fungus held in the deer’s mouth and the tumultuous depiction of the waves around the base. The potter has delivered a striking design with a strong threedimensional quality rarely seen on early Qing porcelain. The vase appears to be the only example known of this elegant form and attractive decoration.

The design is rich in auspicious symbolism – cranes represent immortality as they were said to live for over a thousand years and their white feathers were a sign of old age. It is no coincidence that the vase is covered in a beautiful white glaze - the colour of the cranes that take centre stage in the design and also the colour associated with old age that is much respected in Chinese society. Furthermore, cranes and peaches together stand for the saying ‘may the crane and peaches extend your years (heshou yannian)’, while cranes and ruyi fungus re-emphasise the wish for longevity. Cranes and deer collectively form the rebus for ‘liuhe’ or the six point of the universe, and stand for joyful unification and conjugal bliss.

The material used for the making of white-glazed porcelain wares of this type is also special. It is a Qing innovation whereby huashi replaced kaolin, allowing the vessel to be fired at a lower temperature avoiding warping of the material and creating a rich creamy white tone glaze that could be used for both contemporary designs as well as making objects imitating ‘Ding’ wares.

A number of pieces from this special group, from the Qing court collection and still in Beijing, are illustrated in the Complete Collection of Treasures of the Palace Museum. Monochrome Porcelain, Hong Kong, 1999, pls. 239-241, including one of related baluster form but with handles on the shoulder and moulded lotus scroll decoration covering the body, bearing a six-character Qianlong reign mark on its base, pl. 239. Further examples were included in the exhibition Monochrome Ceramics of Ming and Ch’ing Dynasties, Hong Kong Museum of Art, Hong Kong, 1977, cat. nos. 140-141, one of double-gourd form and the other of hu shape after archaic bronze vessels.

A meiping richly decorated in high relief with bats, peaches and shou characters, from the collection of Edward T. Chow, was sold twice in our Hong Kong rooms, 19th May 1981, lot 518, and 11th April 2008, lot 2507. See further two examples sold in our Paris rooms, a baluster vase with elephant head handles, the body decorated with archaistic design bands, sold 12th June 2008, lot 325; and a vase with floral decoration, from the collections of Richard H. Halstead and the Honourable Hugh J. Grant, sold 13th June 2012, lot 185.