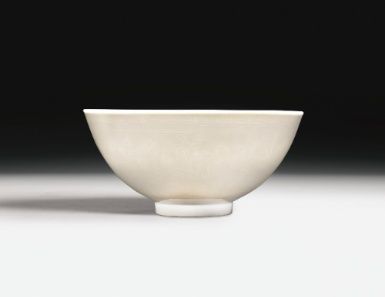 the deep rounded sides supported on a straight foot, decorated in anhua to the interior with a floral medallion, enclosed by radiating stiff petal lappets below a band of breaking waves at the rim, the exterior incised with an undulating floral scroll bearing alternating chrysanthemum and camellia blossoms below a keyfret band, applied overall with a milky-white glaze, Japanese wood box. Quantité: 2 - 21cm., 8 1/4 in. Estimation: 60,000 - 80,000 GBP

NOTE DE CATALOGUE: Anhua, ‘hidden decoration’, is a complicated and not yet fully-understood manner of decoration that appears to have involved some moulding into a fine layer of slip. It was practised almost exclusively at the beginning of the Ming dynasty, from the Hongwu to the Xuande period, and only at Jingdezhen. The term is often misinterpreted and used to designate any difficult-to-decipher design, but pieces such as the present bowl, which is decorated with both incisingand with anhua, clearly document the difference between the two techniques.

A closely related bowl from the Meiyintang collection is illustrated in Regina Krahl, Chinese Ceramics from the Meiyintang Collection, London, 1994, pl. 649, where she notes that although blue and white bowls of this type were also produced, but with the interior and exterior designs reversed, the Yongle emperor is believed to have preferred monochrome white wares and blue-and-white only became popular during the Xuande period (1426-35). Further bowls of this type include one in the National Palace Museum, Taipei, published in Minji meihin zuroku, vol. 1, Tokyo, 1977, pl. 102; one published in Porcelains from the Tianjin Municipal Museum, Hong Kong, 1993, pl. 73; another from the Alfred Clark collection, included in the Oriental Ceramic Society exhibition The Arts of the Ming Dynasty, London, 1957, cat. no. 9, and sold in these rooms, 26th June 1973, lot 247; and a fourth bowl from the M.C. Wang, Edward T. Chow and Mathias Komor collections, sold at Christie’s New York, 20th September 2001, lot 133.