Jan Breughel II (1601-1678), Lilies, irises, roses and other flowers in a vase decorated with the figures of Amphitrite and Céres, on a stone ledge with a stag beetle and other insects, circa 1630. Estimate: £1 million to £1.5 million. Photo: Christie's Images Ltd 2012.

This auction builds on the success of the landmark evening auction of Old Master & British Paintings in July, which realised £85 million/ $133.4 million / €105.7 million becoming the highest total in the history of the category and setting new record prices for artists such as Constable, Lorenzetti, van der Ast, Coorte, Wtewael and Zurbarán.

Richard Knight, co-Chairman of Old Master & British Paintings at Christie’s and Georgina Wilsenach, Head of Old Master & British Paintings at Christie’s London: “Our sale in July attracted buyers from 22 countries in 4 continents, many of whom were new to this category, and some of whom were new to Christie’s altogether. We look forward to presenting this energised and dynamic market with a selection of important paintings which will speak to connoisseurs around the globe, led by the exemplary large-scale still life panel by Breughel II and rediscovered treasures such as Jordaens’ tapestry design.”

Highlights of the auction:
• The Breughel family – led by the innovation of Jan Breughel the Elder - was at the forefront of flower painting at a time when this genre was still a new invention radical, untested, avant-garde. Lilies, irises, roses and other flowers in a vase decorated with the figures of Amphitrite and Céres, on a stone ledge with a stag beetle and other insects by Jan Breughel II (1601-1678), has been dated to circa 1630 and described by an expert in the field as ‘one of the finest examples of this type of composition which I have seen so far, and a marvel in its colouring’ (estimate: £1 million to £1.5 million). The present work derives from Still life of flowers in an earthenware vase by Jan the Elder, in the Gemäldegalerie, Berlin, with both compositions containing similarly decorated vases. The younger artist introduced his own innovations resulting in a work that is distinctive in its monumentality, its spatial realism and its complexity. It displays a realism that is perhaps lacking in the prototype, resulting in a more tangible arrangement, not superficially beautiful but with a real spatial presence.

• Portrait of a lady three-quarter-length, in a black mantle, rust coloured silk skirt and lace ruff, with coral beads by Sir Anthony van Dyck (1599-1641) is offered at auction for the first time in almost 40 years, from the Property of a Lady (estimate: £700,000 to £1 million). This arresting portrait is thought to have been executed by van Dyck in the early 1620s, the decade in which he established his position as one of the most celebrated and sought-after portrait painters of his day. Painted when the artist was working independently, without a studio, his magnificent handling and full range of painterly effects are beautifully exhibited as is his innate interest in the character and the individual. The bold application of dragged paint in the sitter’s sleeves and skirt is allied with the sensitively observed rendering of her features; the pallid skin and blue watery eyes – which look directly at the viewer - contrast with the dimly lit background. Long believed to date from the artist’s years in Italy, the sitter has traditionally been identified as the Marchesa Lomellini-Durazzo, a noblewoman from the important Genoese family who sat for van Dyck’s most ambitious and celebrated group portrait from his years in the Ligurian Republic, The Lomellini Family. Whilst in Genoa he encountered Rubens’ striking and imaginative portraits, painted twenty years earlier, which sparked van Dyck’s determination to surpass his country man’s mastery of the genre.

Other notable works by Flemish artists include an alluring unpublished painting The Meeting of Odysseus and Nausicaa by Jacob Jordaens (1593-1678) (estimate: £500,000-800,000). It is connected with the artist’s tapestry cycle based on Homer’s epic tale Life of Odysseus, though no tapestry after the present work has survived. It has been passed by decent since 1865 when it was last recorded and is now offered from the property of a Family Trust.

• The Madonna and Child by Paolo di Giovanni Fei (c.1340/5-c.1411) is one of two lots offered from the Property of a Distinguished Private Collection, from which a portion of the proceeds will be donated to Charity (estimate: £700,000 to £1 million). This characteristic panel, which may be of the 1390s, retains its original engaged and richly decorated frame. The iconography of the Madonna del Latte had a wide currency in trecento Italy, though it is the artist’s skill – not the works he saw around him - which ensured that this panel is unusually successful in the way the figures sit within the vertical compartment. The fleurs-de-lis in the Virgin's crown led Ferdinando Bologna to suggest that the picture may have been ordered for a member of the house of Anjou, rulers of Naples for whom Simone Martini himself – the great master of 14th century Siena alongside Lorenzetti - had worked over half a century earlier. The resurgence of interest in this period was highlighted in July when Christ between Saints Paul and Peter, a previously unpublished work by Pietro Lorenzetti (circa 1306-45), sold for £5,081,250/ $7,972,481/ €6,315,994, setting a world record price for the artist at auction (estimate: £1 million to £1.5 million).

Elsewhere in the sale highlights, which further reflect the importance, quality, breadth and depth of the sale, include: A dramatic portrayal of A Blacksmith’s Shop by Joseph Wright of Derby (1734-1797) which is a significant re-discovery, having been previously untraced since it was last exhibited at the Graves Galleries in 1910; known for over 100 years only through an engraving executed by William Pether in 1771 (estimate: £400,000-600,000). Other notable British works include an Equestrian portrait of Albert, Duc d'Arenberg, Prince of Barbonçon (1600-1674), in armour, with a blue sash, in a wooded landscape, a battlefield beyond, after Sir Anthony van Dyck by Thomas Gainsborough, R.A. (1727-1788) and Head studies of Emilia Mary, Juliana and Maria Boucherett by Sir Thomas Lawrence, P.R.A. (1769-1830). Following the success of Mars and Venus Surprised by Vulcan, 1610 - an unpublished and previously unknown copper panel by Joachim Anthonisz. Wtewael (1566-1638) which realised £4,633,250/ $7,269,569/ €5,759,130, setting a world record price for the artist at auction (estimate: £2 million to £4 million) - this sale presents an unpublished and previously unknown signed and dated panel Maternal Charity by Wtewael (estimate: £400,000-600,000, illustrated right). It is likely that this picture, which is the earliest treatment of the subject by the artist, is the same as that recorded in the 1655 inventory by his daughter Antoinetta Pater-Wtewael. 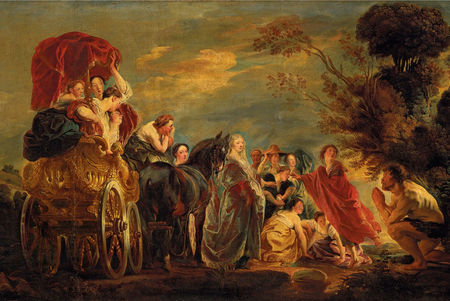