LONDON.- Its history in the Royal Collection dates back to the reign of Charles I. But when Holbein’s portrait Hans of Antwerp came into royal possession in the 17th century, repairs to the painting already obscured the identity of the sitter. After two years of conservation and research, staff at Royal Collection Trust can reveal details that had been lost for 400 years and clues as to who Hans of Antwerp really was.

Hans Holbein the Younger was best known as ‘King’s Painter’ to Henry VIII. Arguably one of the greatest portraitists of all time, he portrayed many of the key personalities at Henry’s court and produced the most enduring image of the King in the famous Whitehall Mural, destroyed by fire in 1698. The newly conserved portrait Hans of Antwerp is one of 27 works by Holbein on display in the exhibition The Northern Renaissance: Dürer to Holbein, on view at The Queen’s Gallery, Buckingham Palace (2 November 2012 – 14 April 2013).

Hans of Antwerp was first recorded in the Royal Collection in 1639, when the painting hung in Charles I’s Chair Room at Whitehall. The inventory reads, ‘Done by Holbin…upon a Crackt board’. Using X-ray technology, Royal Collection Trust conservators recently discovered that the painting suffered a major accident within the first 100 years of its life and had been broken into three pieces. One theory is that the portrait fell down from a wall having suffered water damage. They found that the work had been glued back together and the damaged areas repainted. Many details were hidden by these early repairs – including the identity of the sitter, which has remained a mystery for centuries.

The portrait depicts a man dressed in an expensive fur-lined gown, resting his quill pen on a sheet of paper and cutting the string of a letter with a knife. The paper is dated 26 July 1532 which is the earliest indication of Holbein’s return to England from Basel in 1532. In 1874, a reading of the inscription on the letter led experts to believe the sitter was the goldsmith Hans of Antwerp, who worked for Henry VIII and was a close friend of Holbein and witness to his will in 1543. However, in the 20th century, doubts about the sitter’s identity re-emerged, with details in the painting, including his costume, suggesting Hans of Antwerp was more likely to be a merchant.

Royal Collection Trust conservators have finally resolved the debate. After the painstaking removal of overpaint and discoloured varnish, they have confirmed that the sitter is indeed a merchant. The painting is one of only seven surviving portraits produced by Holbein between 1532 and 1533 of German merchants of the Hanseatic League, who worked out of the London Steelyard. The conservators made their discovery when they realised that the end of the sitter’s seal, turned towards the viewer in the foreground of the painting, had been altered in its early history to appear as a ‘W’. In fact, Holbein had painted a circle and crossed lines – a merchant’s mark. The same mark (in reverse) can also be seen on the letter held in the man’s hand.

The inscription on the letter, partially obscured by the knife, remains hard to decipher. A number of palaeographers [experts in the study of handwriting] have been consulted; one has read ‘Hans of Antwerp’, while two others see a ‘k’ in the name, suggesting perhaps ‘Henricken’. All three agree that ‘hofe’ (part of ‘Stallhof’ meaning Steelyard) appears on the third line. If this merchant was indeed called ‘Hans of Antwerp’ he could have been a German merchant based at the London Steelyard who had strong trading links with the city of Antwerp in the Netherlands.

Royal Collection Trust conservators have returned the murky-brown portrait to its original, vibrant colours, which had been preserved under an early layer of varnish. The last touches that Holbein added to the work, such as the eyelashes and single strands of hair, can finally be appreciated. It can now be seen that the sitter wears several gem-set rings, indicating his wealth, rather than one as first thought.

Twenty-first century technology allowed the conservators to investigate beneath the layers of paint, where they discovered that Holbein had made a number of changes to the portrait, reducing the size of the merchant’s hat and lowering the position of his left shoulder and arm. Infra-red images now reveal the artist’s under-drawing for the first time.

Royal Collection Trust conservator Claire Chorley said, ‘It was incredibly exciting to rediscover details that had been lost within the painting for so long. We even uncovered a metal key lying on the desk that had previously been completely invisible.’

Royal Collection Trust exhibition curator Lucy Whitaker, said, ‘It is wonderful to be able to confirm finally that the man is in fact a German merchant, perhaps sharing a name with the well-known goldsmith. Conservation of the painting has brought us tantalisingly close to solving the mystery of the sitter’s identity.’ 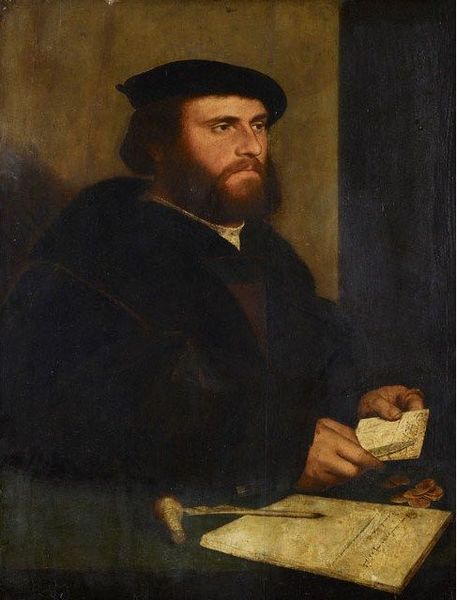