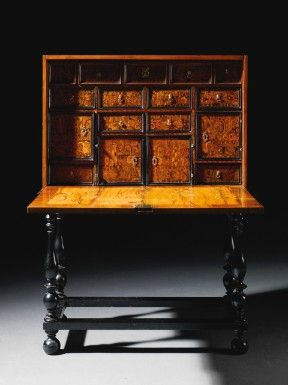 This cabinet with its virtuoso marquetry is a very fine example of the distinctive type of cabinet which emanated fromAugsburg in the second half of the 16th century. They were known as `schreibtische' and were in their time considered a luxury item. According to Baarsen, op. cit., `From the mid-16th century onwards marquetry flourished in this city, fostered by the availability of many indigenous woods and the rapid evolution of new production techniques'.

Most Augsburg marquetry furniture is decorated with landscapes containing ruins and in 1567, Lorenz Stoer published, "Geometria et Perspektiva" in Augsburg, that depicted ruins for the specific use of cabinet-makers-see for example, Jervis, op. cit.. Baarsen also states, op. cit., that on a few early Augsburg schreibtische dating from the 1560's, an iconographical programme can be identified, with the ruins serving as vanitas symbols.

This cabinet served as a writing desk that could at the same time be used to store precious belongings and confidential papers. The carrying handles at the sides allowed it to be taken on journeys. Various examples are in Museum collections, see for example, the one in the Rijksmuseum, Amsterdam, illustrated by Baarsen, op. cit., pp. 7-8.