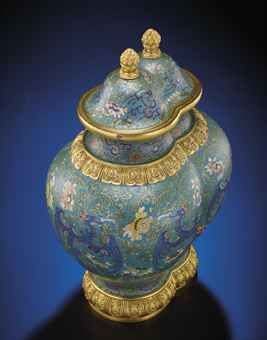 The vase of joined meiping form is finely decorated with six blue archaistic phoenixes amidst multi-coloured peony sprays and arched leaves. The major decoration is bordered between gilt lotus petals around the base and neck. The waisted neck and domed cover with similar phoenixes that are picked out in blue on a dense ground with designs of lotus and scrolling vines. The cover is surmounted by two gilt pine-cone finials. 17 3/4 in. (45 cm.) overall high, box. Estimate HK$5,000,000 - HK$8,000,000 ($648,163 - $1,037,061)

The present lot was from the collection of His Excellence Ilhamy Hussein Pasha (1908-1992), Villa Baia dei Fiori, St Jean-Cap-Ferrat, France, and sold by Tajan in 1993.
The Pasha was a Turkish nobleman who acquired an Egyptian palace and the title of Pasha by marrying Princess Chevekiar, King Farouk's stepmother. 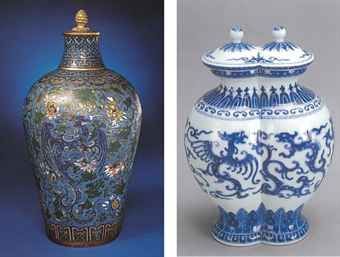 Notes: The present lot is very rare. No other example of this exact double-vase shape decorated in cloisonné enamel appears to be published, although the archaistic phoenix motifs on the body are closely related to a covered meiping vase in the Beijing Palace Museum Collection, illustrated in Zhongguo jinyin boli falangqi quanji, Hebei meishu chubanshe, 2002, p. 65, no. 87 (illustrated right). The current vase belongs to a small group of cloisonné enamelled vessels that are designed with a multiple body such as the vase formed by a pair of double-gourds, a gift of Edward G. Kennedy, now in in the Metropolitan Museum of Art, New York (museum no. 29.110.72), illustrated in Cloisonné - Chinese Enamels from the Yuan, Ming, and Qing Dynasties, New York, 2011, p. 121. fig. 6.33. Another similar comparison is in triple-form, created by the joining of three globular vases, which was a gift from Robert H. Clague and now in the Phoenix Art Museum, Arizona (museum no. 1982.220), illustrated ibid., p. 282, pl. 116.

Conjoined forms, incorporating sections of two or more shapes to create a single vessel, were a visual innovation widely propergated among a number of monochrome ceramic shapes of Yongzheng period (1723-1735). Compare for example to the Guan-type quadruple vase from the Alsdorf and Robert Chang Collections, sold at Christie's Hong Kong, 2 November 1999, lot 524; and the celadon-glazed double-bottle vase in the Bernat and Robert Chang Collections, sold at Christie's Hong Kong, 31 October 2000, lot 825. The production of conjoined vessels continued into the subsequent Qianlong reign. A blue and white coupled vase with archaistic dragon and phoenix motifs on the main body relates extremely closely to the present cloisonné enamel vase in both their shapes and decoration (fig. 2). The same form was also adopted in ceramics with falangcai enamels such as the exceptionally unusual vase in the Eisei Bunko Museum Collection with its two sides decorated with European figures from Greek mythology, illustrated in Sekai Toji Zenshu, vol. 15, Tokyo, 1983, pp. 102-103, figs. 112-114.

The present two-vase form was also embraced by enamelled metalwork and glass wares. For an example of a Beijing enamelled vase designed with scrolling flowers on a yellow-ground, seeEnamelled Wares in the Ming and Ch'ing Dynasties, The National Palace Museum, Taipei, 1999, p. 239, no. 124. For a glass example, see a Qianlong-marked overlay red glass double-vase in the Beijing Palace Museum Collection, illustrated by Zhang Rong, Luster of Autumn Water: Glass of Qing Imperial Workshop, Beijing, 2005, pl. 53. The author mentioned that the double-vase form originated from the Tang dynasty metal wares and the shape was popularly adopted by the imperial workshops during the Qianlong period. The form not only represented the Emperor's aesthetic taste but it was also to symbolise a wish for a perfect companion and harmony, op. cit., p. 198. For a Tang dynasty sancai double-vase prototype, which probably took its shape from a contemporaneous metalwork example that had been moulded with two phoenixes on both sides, see Selected Ceramics from the Collection of Mr. & Mrs. J.M. Hu, Shanghai Musuem, 1989, pl. 3.

The phoenix is highly regarded in Chinese mythology. As a king of birds, legend has it that this creature appears only at the time of peace and prosperity. The combination of the phoenix and peony flowers are commonly known to symbolise fugue jixiang, 'May there be wealth, rank and good fortune'. An interesting point of note is that this vase not only survived with its cover but the European style pine-cone finials surmounting the cover. The pine-cone form was probably an adaption from contemporary European decorative objects amassed by the Qianlong Emperor. Similar finials are seen on a wood and copper clock imported from London in the 18th century, illustrated in Moments of Eternity: Timepieces Collection from the Palace Museum, Macau, 2004, pl. 38.