A Pair Of Ruby-Ground famille Rose bowls. Jiaqing Six-Character Seal Marks And Of The Period (1796-1820)

A Pair Of Ruby-Ground famille Rose bowls. Jiaqing Six-Character Seal Marks And Of The Period (1796-1820) 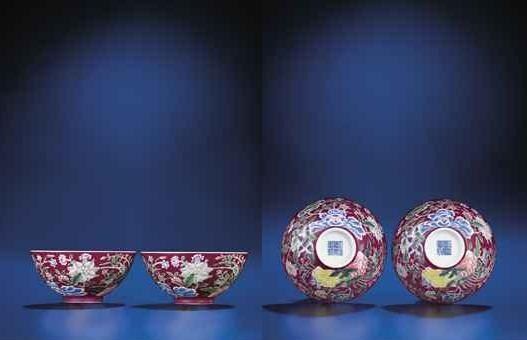 Each with rounded sides is enamelled with multi-coloured composite flowers borne on leafy stems issuing from large blossoms around the base, all reserved on a ruby ground. The interior and base are covered with a clear glaze. 3 9/16 in. (9 cm.) diam. (2).

Notes: A similar example from the Weishaupt Collection was illustrated by G. Avitabile, From the Dragon's Treasure, London, 1987, no. 26. Another in the Gruterich Collection was included in the exhibitionChinesische Keramik: Meisterwerke aus Privatsammlungen, Museum fur Ostasiatische Kunst, Cologne, 1988, Catalogue no. 139.

The decoration on the present lot is fashioned after the Kangxi falangcai prototype, an example of which is in the National Palace Museum Collection, Taipei, illustrated in Fine-Enamelled Ware of The Ch'ing Dynasty K'ang-Hsi Period Porcelain of the National Palace Museum, Hong Kong, 1967, pl. 7. The original design depicts three poppy flowers on a red ground with a Kangxi Yuzhi mark in blue enamel.