The frescoes depict the Legend of the True Cross, written by Jacopo da Veragine.

FLORENCE.- The main chapel in Santa Croce, the largest Franciscan church in existence, was the last chapel in the basilica to be decorated during the 14th century. Impressive fresco cycle which covers 800m² of wall space (30m high and 10m wide), was painted by Angolo Gaddi in the 1380s. Agnolo was considered to be an artistic heir of Giotto, since his father and master, Taddeo Gaddi was one of the best students and closest collaborators of Giotto.

The frescoes depict the Legend of the True Cross, written by Jacopo da Veragine, a subject fitting to the church dedicated to Holy Cross. One of the richest banking families of the time, Alberti family were the patrons of this, probably most important artistic project in Florence at the end of the 14th century.

Aside from the figures illustrating the story, the fresco features a number of images that have nothing to do with the history and traditional iconography of the legend: details of everyday life - inside of a hospital, different animals, as well as different species of flowers, that bring the fresco to life. The artist inserted small portraits throughout the huge fresco, including a self-portrait, a portrait of his father, Taddeo, and even a portrait of Giotto.

The restoration of Agnolo Gaddi's fresco cycle is one of the most important projects in Italy. It was financed in part by Japanese businessman and patron of the arts, Tetsuya Kuroda, who donated almost 1.2 million euro; an equivalent sum was provided by the Opera di Santa Croce. MiBAC also provided 285,000 euro in funding.

The restoration process was completely digitalized. Visit: http://www.santacroceopera.it/en/ArchitetturaEArte_Multimedia.aspx to view digital scenes of the fresco before, during and after the restoration. The software used to digitally document the work, Modus Operandi, allows users to zoom in on details of the restoration that cannot usually be seen by the public. 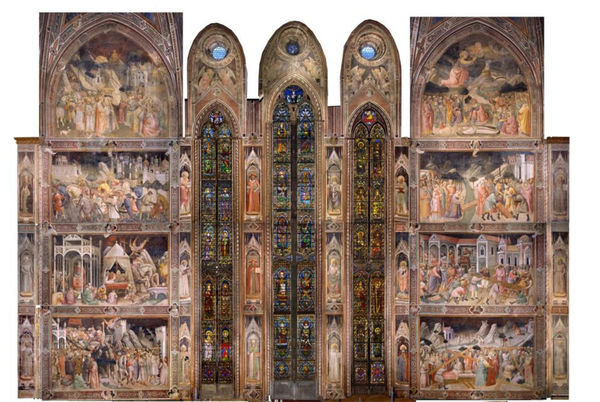 The frescoes depict the Legend of the True Cross, written by Jacopo da Veragine.