New York – On 30 January, Christie’s New York will present Renaissance, a sale devoted to the artistic traditions that flourished in Europe from 1300 to 1600.  A highlight of Old Masters Week in Rockefeller Plaza, the sale will celebrate the golden age that produced some of the most extraordinary innovations in poetry, music and literature, painting, sculpture, and architecture.  Renaissance will feature a select group of paintings, works on paper, tapestries, prints and maiolica from some of the greatest masters of the era who were active throughout Italy, Germany, the Netherlands, and France. Masterpieces by Sandro Botticelli, Fra Bartolommeo, Bronzino, and Lucas Cranach the Younger are among the highlights of the sale, which is comprised of 51 lots and is expected to realize in excess of $40 million.

Nicholas Hall, International Co-Chairman of Old Masters & 19th Century Art, comments:  “This dedicated sale is perfectly tailored to the collecting tastes of today’s art connoisseurs, who prize exceptional works from the leading masters of European art from the 14th century and beyond. In placing a special focus on art of the Renaissance era this season, we have assembled a magnificent sale that echoes the aesthetic and academic interests of great 19th century tastemakers like Ruskin, Swinburne, and Pater, who collected across multiple mediums, from the finest paintings and sculptures, to tapestries, works on paper, and decorative objects.  In recent weeks, as we have toured star lots of this sale to Hong Kong, London and Moscow, these works have been greeted with great enthusiasm by both new and established collectors eager to acquire works of such exceptional quality, rarity, and provenance.”

Leading the sale is premier Florentine portraitist Agnolo Bronzino’s  Portrait of a Young Man with a Book, one of the most important Renaissance portraits remaining in private hands (estimate: $12,000,000-18,000,000).  Recently rediscovered, the Portrait of a Young Man with a Book is among Bronzino’s earliest known portraits, datable to the time he was most closely associated with his teacher, Jacopo Pontormo, whose stylistic influence is clearly visible here.  While the sitter’s identity cannot be confirmed, his social status and profession are alluded to. Elegantly attired and shown writing in a manuscript with a quill pen, he is clearly a cultivated man of letters. The seeming spontaneity of the sitter’s pose and direct gaze toward the viewer suggest that he may have been a close friend of the artist. 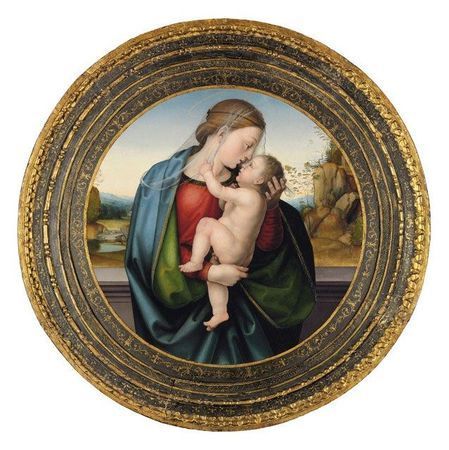 Fra Bartolommeo’s beautifully preserved The Madonna and Child, still set in its original frame, is an important recent addition to the artist’s oeuvre (estimate: $10,000,000-15,000,000). Likely executed in the mid-1490s, early in Fra Bartolommeo’s career, this tondo-shaped oil on panel depicts a tender moment as the Christ child eagerly grasps his mother’s veil, pulling himself up to receive a kiss. While this motif had originated in a late 13th-century icon known as the Glykophilusa Madonna, artists continued to portray the affectionate, maternal relationship throughout the centuries. Unlike his contemporaries, however, Fra Bartolommeo has painted the figures in profile, echoing Byzantine icons, thus elevating them to a beatified, inaccessible realm. Still set in its original frame, the circular form of the tondo is also of note, not only as an allusion to the halo, but also for the long-held associations with the shape. Greeks revered the circle as the most perfect geometrical form, Romans used circular portraits to denote the subject’s apotheosis, and Renaissance contemporaries of Fra Bartolommeo associated the circular format with the cycle of birth, death, and resurrection at the center of the Christian faith. Sandro Botticelli’s Madonna and Child with the Young Saint John the Baptist is also among the highlights of the sale (estimate: $5,000,000-7,000,000).  Intended for private devotional use, the work depicts a popular subject in Florence, as Saint John the Baptist was the patron saint of the city; his presence was likely intended to signal that the patron was a Florentine patriot.  The tender sentiment between mother and child is here combined with an allusion to the Resurrection in the tomb-like structure carved with a classical relief just behind the figures. The diaphanous veil which falls over the Madonna’s head and shoulders signifies her purity, as this was the traditional head covering of unmarried Florentine women.  The painting comes to market with a highly distinguished provenance, having been acquired in the early 1930’s from Lord Duveen by John D. Rockefeller. It remained in the Rockefeller family for some 50 years, and has more recently passed into a private New York collection, though it is still widely referred to as “the Rockefeller Madonna.”

Raphael’s remarkable drawing of Saint Benedict receiving Maurus and Placidus represents the moment when Saint Benedict receives his first disciples, a key episode the history of the Benedictine Order (estimate: $1,000,000-1,500,000).  The drawing can be dated to circa 1503, early in the artist’s career, when he was collaborating with Pinturicchio on the fresco cycle in Siena’s Piccolomini Library, for which Pinturicchio had been commissioned to paint frescoes depicting events from the life of Pope Pius II.  It is likely that in their collaboration, Raphael was only involved in the earlier stages of the commission, executing preliminary compositional drawings rather than assisting with the execution of the frescoes themselves.   This lot may be one such preliminary drawing, as it bears remarkable similarity in style, technique, and composition to a drawing housed in the J. Pierpont Morgan Library in New York that has been confirmed as related to the Piccolomini Library.   The drawing may also be linked to the Benedictine monastic community at Monteoliveto Maggiore, as the same central group of the elderly bearded man and the kneeling young boys was used by Sodoma (1477-1549) in his fresco of Saint Benedict receiving Maurus and Placidus, executed for the monastery in about 1505. A Portrait of Jacopo Boncompagni, executed in 1574 by Scipione Pulzone, is a stunning example of the artist’s famed portraiture and was previously exhibited at the Metropolitan Museum of Art (pictured right; estimate: $1,500,000-2,500,000).  Pulzone was the most sought-after portraitist of his generation in Rome due to his extraordinary skill in meticulously capturing the minutest details of his subjects. Included amongst his most eminent sitters were Popes Pius V and Gregory XIII, as well as Ferdinando I de’ Medici, Grand Duke of Tuscany, and Marie de’ Medici, Queen of France. The letter held in the present sitter’s hand identifies him as Jacopo Boncompagni, the natural son of Pope Gregory XIII and commander of the Papal army. Boncompagni’s role is underscored by the inclusion of a victorious St. Michael on his breastplate and the armorial decoration all’antica, which served the purpose of associating its wearer with ancient Roman military heroes. The closest surviving ceremonial armor to that seen in the portrait is today preserved at the Metropolitan Museum of Art.

Fresh to the market, The Temptation of Saint Anthony by a follower of Hieronymus Bosch has a distinguished provenance, having been owned by the French writer Victor Hugo, who acquired the work in Brussels in the 1860s (estimate: $400,000-600,000).  Among the earliest of the Christian monks, Saint Anthony the Great was the first to abandon society for a solitary existence in the wilderness.  Depicted here is the famous scene in which Saint Anthony is tempted by the Devil, who unsuccessfully appears in myriad forms to coax Anthony from the path of Christian righteousness. A favorite subject of the great Netherlandish artist Hieronymous Bosch, the saint's story was ideally suited to his personal belief that a blissful eternity in Heaven would await those who led an honorable life.  In order to accentuate the consequences of a sinful life, he created a richly inventive repertoire of fantastical motifs, which are included in the present example.  Despite the horrors that surround him, however, Saint Anthony remains stoic as he walks through the landscape. Beautifully preserved, richly colored and intimately sized, Saint Paul in his Study ranks amongst the finest religious works executed by Lucas Cranach the Younger (estimate: $400,000-600,000).   Saint Paul, identified by the sword of his martyrdom, is seated at a stone pulpit, writing his Epistles in a sparsely decorated room that opens to a fanciful rocky landscape. The artist’s characteristically elegant and graphic style is evinced in the confident outline of the figure and the delicate serpentine strokes that make up for the saint’s curly hair and beard.  This is the only known depiction of this subject by the artist, which is truly exceptional for Lucas Cranach the Younger, who commonly produced multiple variants of his religious and historical themes.

Antonio Pollaiuolo’s only known engraving, The Battle of the Nudes, is a milestone in Quattrocentro printmaking and one of the most influential prints produced in Renaissance Florence (pictured right, estimate: $700,000-900,000). While depicting ten nude males in a fiercely violent battle, the lack of a clear narrative has led scholars to believe that its creation was an artistic exercise in anatomical composition, portraying the human form in various poses, also to be used for instructive purposes. The significance of the work is underscored by the fact that it is one of the few prints to be mentioned by Vasari, who lauded Pollaiuolo for his technical abilities in portraying the male form. Pollaiuolo was so pleased with the result, and confident of its success, that he signed his name in a plaque at the right of the subject – the first engraving to bear an artist’s full signature.