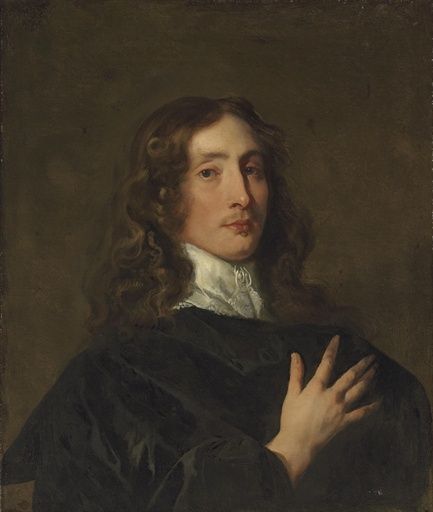 Notes: Previously attributed to Sir Anthony van Dyck (E. Larson, op. cit.), this subtle and engaging portrait has recently been recognized as an early work of the late-1640s by his natural successor in portrait painting, Sir Peter Lely. As the preeminent portrait painter 'in large' in England at the time of the restoration of the monarchy in 1660, Lely was appointed Principal Painter to Charles II in 1661 and thus achieved the status that van Dyck had enjoyed before the Civil Wars.

Having trained in Haarlem under Frans Pietersz. de Grebber, Lely's decision to move to London in the early-1640s may in fact have been prompted by van Dyck's death in 1641. In contrast to the environment in which van Dyck's career had flourished, Lely had to establish his reputation and practice at a politically, socially and financially volatile moment, in a country torn by Civil War and in a capital abandoned by the Court. Despite these challenging circumstances, Lely was able to take advantage of the fact that there were no serious rivals in the field of portraiture in the capital: William Dobson, the most gifted native artist, had followed Charles I's Court to Oxford in 1642 and Cornelis Jonson had left London for The Netherlands in 1643. Lely negotiated the turbulent waters of the English Civil Wars and their aftermath in London in the late 1640s with great skill and diplomacy, since his early patrons included gentry and aristocrats of opposing political allegiances. Lely secured the patronage of a closely related group of aristocratic families -- the 'noble defectors' Northumberland, Leicester, Salisbury and Pembroke -- who had been prominent at the Court before the Civil War and remained in London during the conflict, while also petitioning Parliament to commission a series of paintings of its greatest achievements for the Palace of Whitehall (1653), and executing a portrait of Oliver Cromwell (1654; Birmingham Museum and Art Gallery).

It is less surprising that this portrait was once confused as a work by Lely's celebrated predecessor, when one considers the immense impact that van Dyck's work played on Lely's own painting at this date. Both Northumberland and Pembroke had been important patrons of van Dyck, and Northumberland commissioned portraits of members of his family from Lely to hang as sequels to the portraits van Dyck had painted for him some ten years earlier. Lely drew from van Dyck's repertory of designs and accessories, and the scale of this portrait as well as the sitter's pose, with his face in three-quarter view and his right hand raised to his chest, is closely comparable to van Dyck's Portrait of Thomas Cromwell of 1638 (S.J. Barnes, et al., Van Dyck: A Complete Catalogue of the Paintings, New Haven and London, 2004, p. 493, no. IV.81). Becket records a number of portraits of this format and design by Lely dating from the mid-to-late 1640s, including portraits of the Hon. Leonard Grey, Sir John Holland, Philip Sidney, 3rd Earl of Leicester of c. 1645, and Nathaniel, 3rd Lord Crewe of c. 1647 (R.B. Beckett, Lely, London, 1951, nos. 223, 255, 290 and 142 respectively). While the pose of this portrait is likely to have been adopted from van Dyck, the handling is arguably more spontaneous; most notably in the highlights on the nose, lips and lower eyelids, which give life to the sitter's face, and in the light, flickering highlights used to describe the sitter's flowing locks of hair. The more somber tonal range, with the rich black mantle, white lace collar and creamy flesh tones set against a plain background, is reminiscent of such Dutch artists as Bartholomeus van der Helst, Jacob van Loo and Jacob Adriaensz. Backer. By the late 1650s, Lely had attained an even greater synthesis between his own, essentially Dutch, abilities as a painter, and his reinterpretation of the elegance he admired in van Dyck.

We are grateful to Diana Dethloff and Catharine MacLeod for confirming the attribution on the basis of photographs and for dating the portrait to the 1640s.