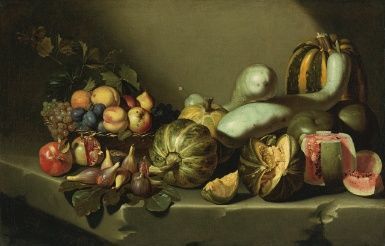 This grand and beautifully arranged Still Life with Fruit on a Stone Ledge is both an important and evocative example of the first generation of Roman still life painting. Completed sometime in the first decade of the 17th century, it dramatically exemplifies the advances made in the still-life genre in the early seicento. What appears to be a straightforward display of fruit is in fact a highly thought out and studied compositional tour-de-force, so successful as a deceptively complex and meticulously rendered picture.

Presented here is an amalgam of more traditional modes of early still-life painting with a completely new and powerful approach to the genre. On the far left side of the composition is a simple basket filled with a profusion of apples, pear, grapes, and figs. Though not easily known to Baroque artists, such representations of fruit in a basket have roots as far back as Roman wall paintings, common in many ancient villas, and depicted both in painted and mosaic form. More contemporaneous with the present example are late cinquecento Lombard examples of simple fruit still life's, such as the work of Fede Galizia, notably her Peaches in a Pierced White Faience Basket (see F. Caroli, Fede Galizia, Turin, 1989, p. 87, no. 25), as well as her Still-Life with Cherries (Hampton Court).

The composition here carefully draws the viewer’s eye from left to right, leading away from the basket of fruit and across to a group of eight figs and three round striped melons. The most dramatic element within the composition is undoubtedly the large serpentine bottle gourds which dominate the right portion of the composition. Their sleek white surface is set off against the ripe red watermelons which have been cut into pieces and carefully arranged at the edge of the stone ledge. The entire composition is lit in a highly dramatic fashion. Its single source of light rushes into the scene from top left, not unlike a theatrical stage setting. Such intense lighting washes over each piece of fruit, highlighting the beautiful, yet highly realistic and intricately rendered surfaces of every still life element. The ledge itself, a stark and cold grey slab of carved stone, is also rendered in a highly realistic manner. Small chunks are missing from the hulking piece of stone, thus lending its surface a worn complexion which echoes the bruised and cut surfaces of the fruit itself. It is this complex arrangement and dramatic lighting which encapsulates the developments made in Rome in the genre of still-life. Few in Rome at this time would have been capable of conceiving of such an innovative and technically proficient work, a fact which has naturally led to Caravaggio as a possible candidate for its authorship, and it is for that reason that this picture has emerged as a significant contribution to not only Roman still life painting, but to all Italian still life painting of the 17th century.

Compositionally, Still Life with Fruit on a Stone Ledge relates closely to the woodcut frontispiece of the Venetian Antonio Gardano's (1509-1569) Mottetti del frutto (fig.1), an anthology of musical motets by the composers Jacques Arcadelt and Nicolas Gombet, published by the Gardano studio in 1538. The Gardano woodcut is an important link between the worlds of art and music. Printed nearly fifty years before the genre of still life painting became a fully formed entity, this still life woodcut was widely published throughout Italy and existed as one of the earliest examples of a modern Italian Still-Life image of any sort. Given its immense popularity and dissemination throughout Europe, the woodcut would have almost certainly been seen in Rome by the group of artists developing the genre at the turn of the century, and must have served as an inspiration for not only this composition, but also for other emerging artists
in the city seeking to define a still life idiom for the first time.1 In fact, there is direct evidence that Caravaggio himself had first hand knowledge of the woodcut, as he illustrated a page of music in his Lute Player (fig.3 1594-5, Hermitage, St. Petersburg, inv. 45), which is a madrigal by Arcadelt as published by Gardano.

That this Still Life with Fruit on a Stone Ledge is of the highest quality, and clearly connected with Caravaggio and other highly innovative Roman artists at the turn of the century, leads to the surprising realization that it was only rediscovered at auction in 1992 (see Provenance). Upon its reemergence into the scholarly discourse it immediately sparked debate regarding its likely attribution, which up to this point has remained a topic of debate. Those who have argued in favor of Caravaggio’s authorship point to period texts which make reference to a still life painted by him. Specifically, the picture may correspond to the description of a Still Life with a Basket of Fruit on a Stone Table by Caravaggio in the collection of Cardinal Antonio Barberini.2 Though a conversion of the 17th century palmi do not match exactly the dimensions of this canvas, the system for comparing modern measurements with those from 17thcentury texts remains an inexact science. If indeed this picture is that which was owned by the Barberini, it is likely to have formed part of a group of three paintings by Caravaggio commissioned by Maffeo Barberini (later Pope Urban VIII), and paid in four installments between June 1603 and January 1604.3 At the time of the Pope's death in 1644 his nephew Cardinal Antonio Barberini the younger would have presumably inherited the Still Life with Fruit on a Stone Ledge. The extant literature neither describe nor assign a title to any of the paintings acquired from Caravaggio by Maffeo Barberini in 1603. Presently, only one of the three which has been identified with complete certainty is the  Sacrifice of Isaac in the Uffizi.

The dynamic artistic environment in which Still Life with Fruit on a Stone Ledge was created cannot be overstated. Certainly, Caravaggio was the leading proponent of the genre, if not through the number of independent still lifes he executed, then through the obvious skill and bold refinement he brought to its development. Without question, his Basket of Fruit (Fiscella) (1599, Pinacoteca Ambrosiana, Milan) emerges as the most strikingly original contribution to Italian still life painting in the 17th century. Furthermore, his seamless interweaving of still life compositions into otherwise purely religious or secular scenes allows for a fuller understanding of his affinity for still life painting. Both The Supper at Emmaus (fig. 2, 1601-2, National Gallery, London, inv. 172), and The Lute Player (fig. 3), provide an early framework through which Roman artists could conceive of new modes of representing inanimate objects. Though beyond Caravaggio’s undeniable contribution to Roman still life painting, and thus to the creation of Still Life with Fruit on a Stone Ledge, the group of artists working around Caravaggio at this time were perhaps equally as fundamental in fostering a dynamic artistic environment in which this stunning work could have been executed. The field is no doubt complicated, and in fact the identities of a number of the artists working in and around Rome at the turn of the century have yet to be fully understood. Anonymous masters such as Pensionante del Saraceni, the Master of the Acquavella Still Lifes, and the Master of Hartford (who was himself considered to be Caravaggio for a time), contribute key independent still life’s in the first quarter of the 17th century that bear marked stylistic and compositional similarities with the present work. Additionally, more fully recognized hands such as Tommaso Salini, Giovanni Battista Crescenzi, and Agostino Verrochi each embrace the still life genre, helping to cultivate and foster both its legitimacy and desirability in Roman collecting circles at the turn of the century. When compared with key examples from these foundational artists (see M. Gregori, La Natura Morta Italiana Da Caravaggio al Settecento, exhibition catalogue, Florence 2003, p. 122-185), Still Life with Fruit on a Stone Ledge emerges as a superlative, andsoaring highlight from this revolutionary moment in Roman painting.

Commentaires sur Roman School, circa 1605-1610, Still life with fruit on a stone ledge