BRUSSELS.- Bozar Expo presents, in cooperation with the Palais des Beaux-Arts de Lille, a major interdisciplinary project consisting of an ambitious exhibition, various concerts and debates, devoted to a great French master of the early 18th century, Antoine Watteau, with a particular focus on the musical scenes frequently depicted in the painter's work. The exhibition's general curator, the renowned orchestral conductor William Christie, is also at the heart of a cycle of eight concerts that will evoke the sensual atmosphere of Watteau's canvases.

In the spring of 2013 BOZAR is presenting the first exhibition in Belgium to be devoted to Antoine Watteau (1684–1721). This not only offers an opportunity to see a number of his works; moreover, it sets his pictures to music; it also highlights the correspondence between the arts that was at the heart of his work as an artist. Almost a third of Watteau's works feature musicians. Born to a humble family, he was a short-lived star of French 18th-century painting, dying at the early age of 37. Despite his short life and limited oeuvre, Watteau's elegance and genius left their mark on European art.

Little is known about his years of training in his native Valenciennes, a town that was open to both Flemish and French influences, as it only became attached to France in 1678. We can, however, be sure of the importance of his master, Claude Gillot (1673–1722). It was through him that Watteau, the “fils du Nord”, discovered Italian painting and the Commedia dell'Arte, which meant so much to him, even though he would never make the journey to Italy.

Watteau passed the bulk of his career in Paris, towards the end of the reign of the Sun King and during the Regency, a period in which the French capital experienced an aesthetic ferment and a renewed commercial enthusiasm for art. It was in that context that, in the 1720s, Watteau became a protégé of Pierre Crozat (1661–1740), one of his great patrons. Crozat helped to bring into being a musical circle in which both Italian and French music were acclaimed. His collection also helped Watteau to find himself as an artist, as he enthusiastically copied drawings it contained by Flemish and Venetian masters (Rubens, Van Dyck, Titian, and Campagnola). Their attention to colour, movement, and sensuality fascinated the young artist, who drew on those qualities to create a new style, less grandiloquent and less formal, imbued with a feigned lightness and an unprecedented elegance.

So there is nothing fortuitous about the presence of other disciplines – theatre, dance, and music, in particular – in Watteau's paintings. They are very much present in the figures depicted in the "fêtes galantes", whose language he invented: scenes of intimacy, conversation, and music set in an enclosed natural setting in which the human condition plays with appearances. Are we looking at aristocrats who have put on the costumes of actors or at theatrical scenes reconstructed in a bucolic setting? Watteau explores, as no one had done before him, a free combination of theatrical characters, whom he places away from the stage, somewhere between life and playing a role. Music is never far away in these fêtes galantes. The titles of works such as La Leçon de musique, Le Concert amoureux, and L’Accord parfait are highly evocative in this context.

The exhibition, which has a particular focus on the musical aspect of Watteau's painting, brings together a unique selection of fifteen of the artist's canvases and thirty of his drawings, some of which have not been seen by the European public for more than 50 years. It also presents fifty engravings by his contemporaries, including François Boucher, Benoît Audran II, and Charles-Nicolas Cochin, who produced the finest engravings of the 18th century and spread Watteau's art throughout Europe. Thanks to them, we have reproductions of paintings of his that have since been lost and it is possible to offer an almost complete overview of his work. This unprecedented combination of original paintings, drawings, and engravings, as well as archival material, scores, and musical instruments of the same period, is a first.

The exhibition itinerary is organised chronologically and thematically. The visitor first discovers the silent dimension of Watteau's art and is thus better placed to appreciate its various musical tones later in the exhibition.

The aesthetic experience is heightened as the visitor is immersed in the music of the time thanks to the audioguides and several listening points throughout the exhibition circuit. A special room is set aside for free concerts given by students of various Belgian and French conservatories on Thursday evenings.

The intervention by Dirk Braeckman, leading Belgian photographer with an international reputation, establishes connections between Watteau’s work and contemporary art. 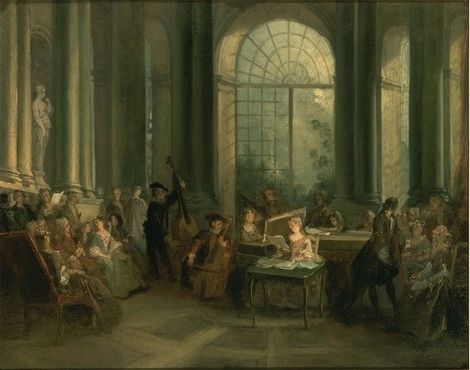 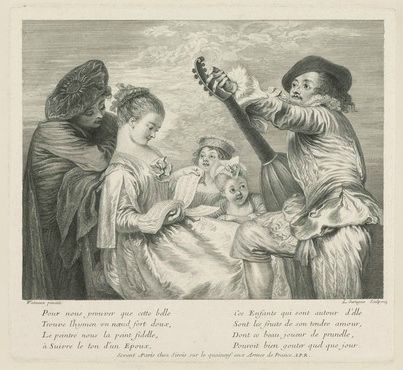