PRINCETON, NJ.- The Princeton University Art Museum presents Revealing the African Presence in Renaissance Europe, an exhibition exploring the presence of Africans and their descendants in Europe from the late 1400s to the early 1600s and the roles these individuals played in society and in the history of art. Africans living in or visiting Europe during this time included artists, aristocrats, saints, slaves, and diplomats. The exhibition of vivid portraits created from life and other forms of representation—themselves a part of the wider Renaissance focus on the identity and perspective of the individual—encourages face-to-face encounters with these individuals and poses questions about the challenges of color, class and stereotypes that a new diversity brought to Europe. Aspects of this material have long been studied by scholars, but this exhibition marks the first time the subject has been presented to a wider American public.

Revealing the African Presence in Renaissance Euro“The exhibition focuses new attention on an important but poorly understood aspect of Western history and the history of representation, and thus continues our commitment to expanding the borders of scholarship and public understanding,” according to Princeton University Art Museum Director James Steward. “This exhibition affords an exceptional opportunity to discover great works of light and encourages us to reflect on our understanding of cultural identity both past and present.”

“The exhibition focuses new attention on an important but poorly understood aspect of Western history and the history of representation, and thus continues our commitment to expanding the borders of scholarship and public understanding,” according to Princeton University Art Museum Director James Steward. “This exhibition affords an exceptional opportunity to discover great works of light and encourages us to reflect on our understanding of cultural identity both past and present.”

The presence of Africans and their descendents in Europe was partially a consequence of the drive for new markets beginning in the late 1400s. This included the importation of West Africans as slaves, supplanting the trade of slaves of Slavic origin. There was also increasing conflict with North African Muslims and heightened levels of diplomatic and trade initiatives by African monarchs. Publications by African scholars and writers in Europe contributed to a more balanced view of the African presence than previously available from European artists and writers alone.

The first half of the exhibition explores the conditions that framed the lives of Africans in Europe, including slavery and social status, European perceptions of Africa, the representation of Africans in Christian art, blackness and cultural difference as well as the aesthetic appreciation of blackness. The second half shifts to individuals themselves as slaves, servants, free and freed people, and diplomats and rulers—the range of ways in which Africans found themselves in Renaissance Europe—concluding with a focus on the remarkable presence of St. Benedict (the Moor) of Palermo, widely revered in his lifetime, but also one of the African-Europeans of the 1500s with the greatest impact today. The trajectory traced by the exhibition is thus one of movement from the margins to the center, both in societal terms and in representation, enabling us to understand not only broad shifts but also the role of specific Africans in Europe.

“Recognizing the African presence within Renaissance society opens a new window into a time when the role of the individual was becoming recognized—a perspective that remains fundamental today,” said exhibition organizer and Walters Art Museum curator of Renaissance and Baroque Art Joaneath Spicer. “We are just beginning to understand the contributions of people of African ancestry in that society, so the exhibition raises as many questions as it answers.”

• Portrait of Maria Salviate de’ Medici and Giulia de’ Medici, Jacopo de Pontormo, ca. 1537. Free descendants of slaves were found at all levels of European society. The little girl with her guardian is Giulia de’ Medici, daughter of Alessandro de’ Medici, duke of Florence, the latter thought to be born of a union between Cardinal Giulio de’ Medici and an African slave. Giulia enjoyed an aristocratic lifestyle and her descendants thrive today. The painting is considered to be the first formal portrait of a child of African ancestry in European art.

• Portrait of an African Slave Woman, Annibale Carracci (attributed), ca. 1580 Paintings representing real individuals in servitude primarily show them in domestic roles, such as this maid from the fragment of a larger portrait. She has remarkable presence, sensitively conveyed by the artist through the ambiguity of her facial expression suggestive of an actual individual human being rather than a portrait “type”.

•Chafariz d’el Rey in the Alfama District (View of a Square with the King’s Fountain in Lisbon), Netherlandish, ca. 1570–80 This scene of daily life in Lisbon is astonishing for the concentration of Africans from a range of social and economic levels, from a slave in chains to the knighted man on horseback. Black people made up nearly 10% of the city’s population, more than anywhere else in Europe at that time. A fragment of a larger painting, Portrait of an African Slave Woman is attributed to Annibale Carracci, circa 1580s, oil on canvas. Tomasso Brothers, Leeds, England 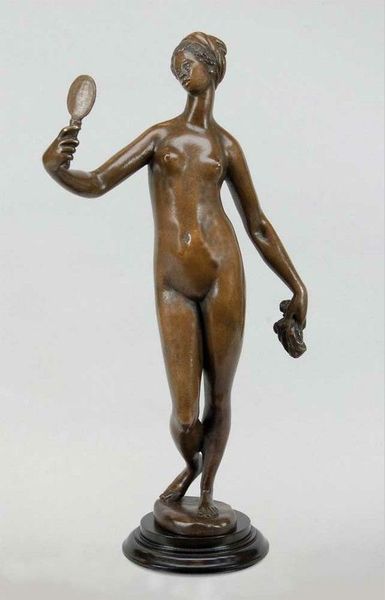 Adoration of the Kings by Girolamo da Santacroce, 1525–30, oil on panel.   The Walters Art Museum, Baltimore, acquired by Henry Walters with the Massarenti Collection, 1902 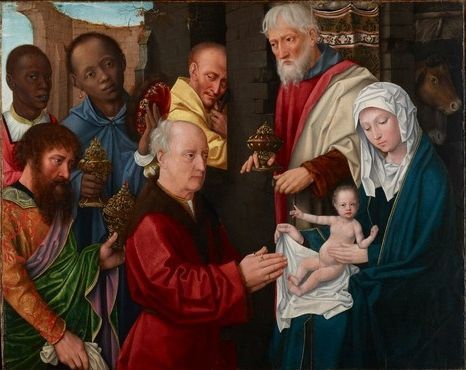