BEVERLY HILLS, CA.- The excitement of Asia Week New York, with its multitude of lectures, exhibitions and other special events, has attracted knowledgeable buyers from the Far East to Manhattan for the past seven years. Now dedicated Asian art aficionados who spend as long as 16 hours on an airplane to reach the US East Coast have a very tempting reason to add a Los Angeles layover to their itineraries. The I.M. Chait Gallery in Beverly Hills will be hosting a March 17 auction of Important Chinese Ceramics and Asian Works of Art to welcome those travelers to US shores.

“Many outbound flights from Asia to New York make a stop in California along the way. Since we were unable to participate in Asia Week this year due to the unavailability of a suitable auction space in New York, we decided to conduct our annual Asia Week sale right here in our Beverly Hills gallery,” said Chait founder Isadore M. Chait.

Chait explained that Asia Week’s agenda has expanded to the point that exhibition space is now difficult to secure – in his words, “a good thing, in one way, as it is a clear indication that the economy is improving and the Asian art market is robust.”

The I.M. Chait family and staff have left no stone unturned in preparing for the March 17 live auction, which also will be available to bidders via phone, Internet and absentee methods. The 295-lot sale is led by a premier Park Avenue (New York) A European collection was the source of the auction’s centerpiece – a magnificent 14th-century Yuan Dynasty blue and white ovoid porcelain jar (Lot 144) decorated with a continuous equestrian warrior scene. A most exceptional and historically significant piece, its motif narrates a scene from the Yuan zaju drama “The Savior Yuchi Gong” and describes how General Yuchi Gong saved the Tang Emperor Taizong from assassination. Isadore Chait believes the vessel could reach or exceed one million dollars at auction. 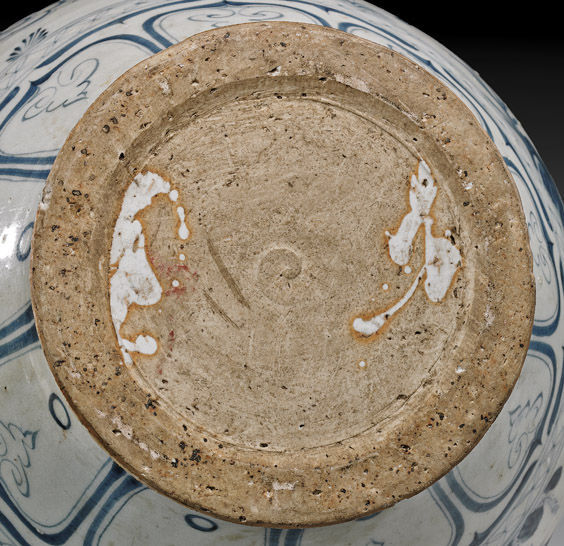 of ovoid form with a pair of moulded tiger handles; the body with remarkable design of equestrian warriors in a continuous landscape; depicting narrative scenes from the Yuan zajudrama The Savior Yuchi Gong, describing how general Yuchi Gong saved the Tang Emperor Taizong from assassination; all between lotus band to the shoulder and lappets around the base; 14th Century; H: 14 3/4"; Estimate upon Request

Divine in more ways than one, a highly important early 15th-century Ming Dynasty gilt bronze Bodhisattva of Manjushri (Lot 186) wears an elaborately detailed crown, necklaces and earrings. A six-character Yongle mark is inscribed under the figure’s base. Estimate: $200,000-$300,000. 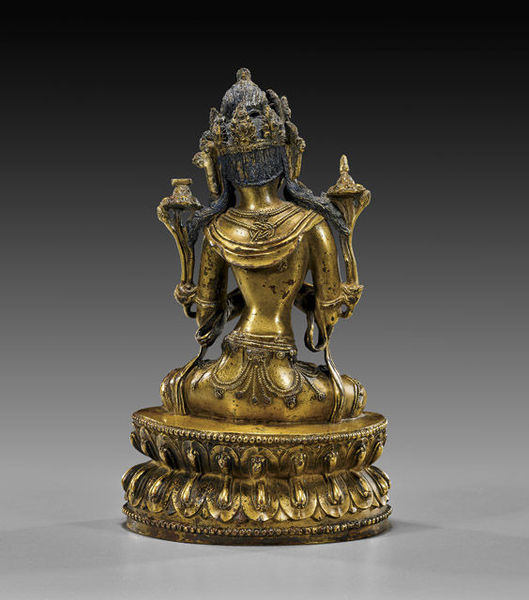 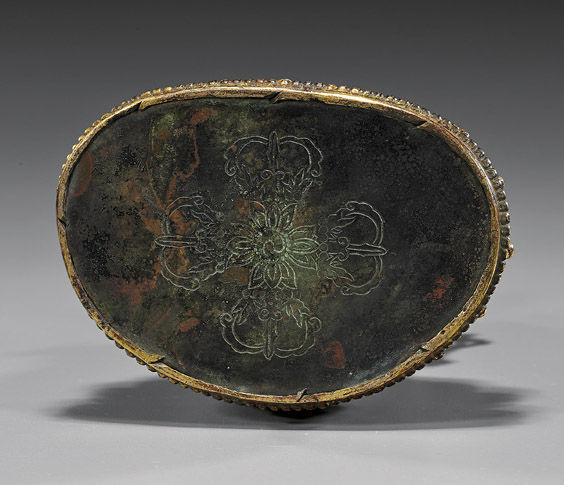 of Manjushriseated in dhyanasana on a double lotus base, with hands in mudra; wearing elaborately detailed crown, necklaces and earrings, and with lotus flower to each shoulder, one holding up a sword and the other, a scripture; H: 7 3/8". Estimate $200,000-300,000

From China’s 18th-century Qianlong Period, a celadon with gray-black jade mountain (Lot 212) is masterfully carved with the scene of two figures in a boat amid rockery and clouds. A third figure of a man is carved in relief to render the effect that he is crossing a bridge. This artwork is expected to make $45,000-$55,000. of horizontal inclination: the front with a deeply carved scene of two figures in a boat, with a pavilion nestled in amid rockery and clouds overhanging, the verso with scene of a figure crossing a bridge; the stone of celadon and gray-black coloration, with some yellow suffusions and showing allover attractive patina; L: 7 7/8"; with superb detailing on original antique carved openwork stand - Estimate $45,000-55,000

Another fine antique carved from celadon jade is the 18th-century Chinese marriage bowl on ornate hardwood stand (Lot 214). Of low, wide form with openwork bats and flowers on its handles, the bowl is decorated in relief with gourds and foliage that create the rebus “fulu shuangquan,” translated: “'May both fortune and wealth prevail.” It is entered in the sale with a $40,000-$50,000 estimate. 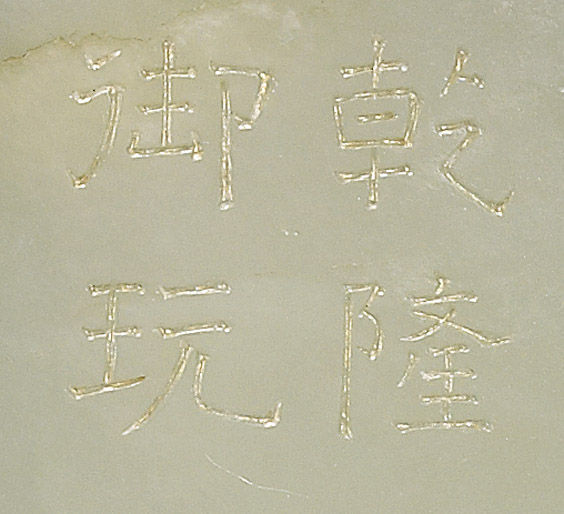 of low wide form, with openwork bats and flowers to handles suspending loose rings; the body with gourds and foliage in relief; set on four trifoliate feet; the combination of bats and gourds providing the rebus fulu shuangquan ('May both fortune and wealth prevail'); the stone of even coloration with slight 'mutton-fat' suffusions; D: 10 1/8"; with fin. Estimate $40,000-50,000

A third celadon jade artwork of particularly fine quality is the Chinese carved tablescreen (Lot 287) with an image of flowering bushes and rocks on its front and a lacquered landscape scene on verso. The carving is handsomely presented in a carved hardwood frame of archaistic motif with dyed green bone and ivory openwork borders. Estimate: $8,000-$12,000. 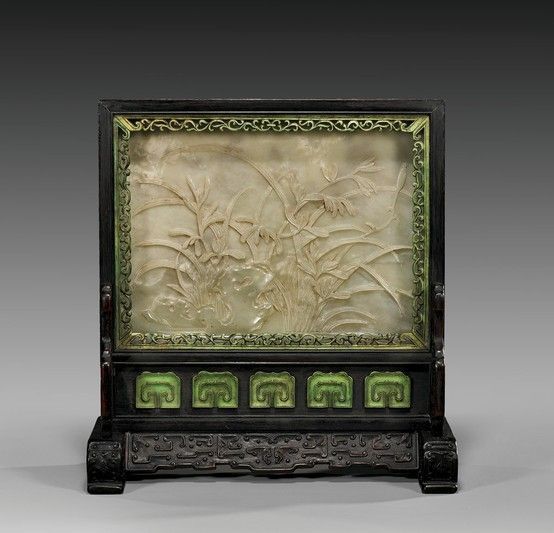 the central celadon jade panel carved with flowering bushes and rock motifs to the front, and with gold lacquered landscape scene to the reverse; the jade with some 'mutton-fat' suffusions; H: 10 1/4" (overall). Estimate $8,000-12,000

Large and well modeled, an early Tang Dynasty model of a striding Bactrian camel (Lot 175), with mouth agape and separate bearded rider on saddle, stands 28 1/8 inches tall. It is accompanied by an Oxford TL Test Certificate and has a presale estimate of $25,000-$35,000. Extremely rare and dating to the Song Dynasty, a pair of pottery figures of seated generals (Lot 172), each wearing ornate armor and hats with removable finials, also comes with a TL Test Certificate (C-Link Research & Development Ltd). Estimate for the pair: $18,000-$24,000. 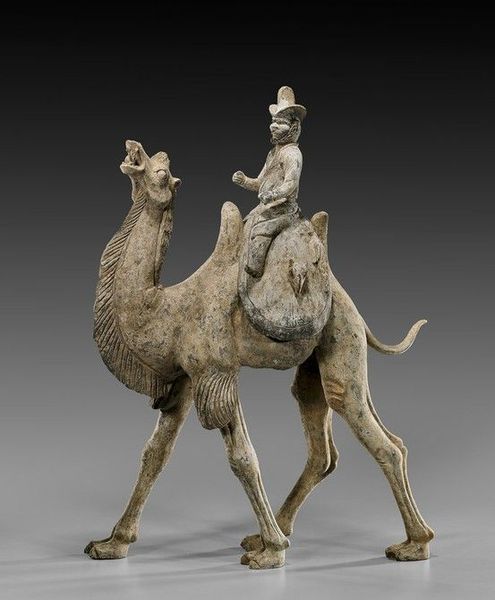 with well detailed features, the beast in a walking stance, with head thrown up and mouth agape; together with original separate saddle with bearded foreigner riding and wearing an unusual hat, probably a hunter; the saddle sides with some animals; with much remaining original slip and pigments; H: 28 1/8"; with Oxford TL Test Certificate #C106q60. Estimate $25,000-35,000 each finely modeled wearing ornate armor, with removable finials to their hats; one bearded, the other holding an implement in one hand; H: 25" (each approx.); with C-Link Research & Development Ltd TL Test Certificate #8148AJ46 - Estimate $18,000-24,000

The realistic artistry on many of the netsukes in the auction simply must be seen to be believed. For example, a carved wood sashi netsuke (Lot 29) depicting a tall armored warrior deity about to plunge a long sword into an oni at his feet is as intricately detailed as any full-size work by a master sculptor. Each strand of hair on the oni’s head is clearly visible, as is the musculature of his legs. This particular netsuke is signed and boxed, and comes with provenance from the Florida estate of Michael Earlman. It is estimated at $2,500-$3,000. An impressive 7 7/8 inches tall, a spinach jade brushpot (Lot 224) is expertly carved with a continuous landscape scene of sages in a courtyard, with pavilions tucked amid rockery and pine trees. Formerly in the collection of the Cleveland Museum of Art and deaccessioned around 1950, the brushpot should realize $35,000-$45,000 at auction. of cylindrical form, with continuous landscape design depicting sages in a courtyard, with pavilions tucked in amid rockery and pine trees; the stone of fairly even coloration throughout; H: 7 7/8"; openwork gilt wood stand. Estimate $35,000-45,000

Isadore Chait, who spent the past year carefully hand selecting each piece for his company’s March 17 auction, said he is confident the event will be a great success. “Asian art buyers have become one united community. Although it is always a pleasure to see and be seen in New York during Asia Week, we know that the location of our auction room is of far less importance, now, thanks to new technologies and the choice of bidding methods that have been made available to Asian art buyers,” he said.

I.M. Chait’s Asia Week Important Chinese Ceramics & Asian Works of Art Auction will take place at the Chait gallery on Sunday, March 17, commencing at 1 p.m. Pacific Time. The gallery is located at 9330 Civic Center Dr., Beverly Hills, CA 90210. All forms of bidding will be available, including live via the Internet through LiveAuctioneers.com and Artfact.com.