PITTSBURGH, PA.- The Frick Art & Historical Center announces the opening of A Kind of Alchemy: Medieval Persian Ceramics, a rich and colorful exhibition of more than 60 objects made between the 10th and 14th centuries in Persia (what is now present-day Iraq, Iran and Afghanistan). Recognized today as one of the major artistic expressions from the lands of Islam, Medieval Persia’s beautifully decorated luxury ceramics have been prized by collectors over the centuries, but little-known by the general public. The exhibition opens at The Frick Art Museum on Saturday, February 23, and will remain on view through June 16. Admission is free.

The alluring title of this exhibition, A Kind of Alchemy, perfectly captures the nearly magical transformation of clay into durable, functional, and beautiful ceramics. Alchemy refers to the ancient branch of science which attempted to transform base metals into gold. Abu al-Qasim, a 14th-century historian, and member of a Persian family of ceramists, used the phrase “A kind of alchemy” over 700 years ago, when Persian ceramics were some of the finest produced in the world.

A Kind of Alchemy: Medieval Persian Ceramics provides a fascinating look at the diversity of ceramics made in ancient Persia for both the luxury and middle-class market. These vessels, bowls, pitchers, and bottles reflect a variety of cultural and artistic influences and an aesthetic sensibility that seems startlingly modern. The highly specialized artisans working in Medieval Persian production centers like Nishapur and Kashan (both located in what is now Iran) knew the technical secrets required to produce some of the most beautiful ceramics ever made. From hauling the finest clay more than 100 miles, to grinding quartz pebbles, burning plants to create potash, and knowing the secrets to producing lusterware, these artisans created works of lasting beauty and influence, exemplifying the sophistication of a prosperous urban culture.

Says Bill Bodine, director of the Frick Art & Historical Center, "This exhibition provides us with an opportunity to connect the influence of Islamic and Moorish design to interior decoration and decorative arts in our collections—at both The Frick Art Museum and Clayton— and to draw attention to the wider influence of Islamic design in the 19th and early 20th centuries."

The exhibition will be organized by a combination of chronology and decorative technique, beginning in around 10th-century Nishapur, with slip-painted ware, produced using a technique in which natural-colored clay is covered with a thin coating of white slip (watered down clay), creating a white surface for decorative glazes, in imitation of the bright white bodies of Chinese porcelains. Nishapur, a center of ceramics production located in today’s northeastern Iran, was strategically located on the Silk Road, a major trade route between Asia, the Mediterranean, and Europe. This location gave the potters of Nishapur an international market and access to wares traveling the trade routes from other countries. Chinese porcelain was one of the most desirable luxury products of the time and ceramists outside of China struggled for centuries to try to discover the secret to its production. Without the appropriate clay or technical knowledge, Persian artists often worked to simulate porcelain’s qualities. An important decorative innovation of the same period, often applied to the slip-painted ware, was the use of calligraphic Arabic script to create dynamic, flowing designs on pottery. In Islamic culture written language is revered for its connection to the act of creation, and its identification with the text of the Quran, the Muslim holy book, and consequently calligraphy is considered one of the most specialized and highest forms of art.

Buffware, also dating to 10th century Nishapur was created by painting glazes directly on the earthenware, without creating a white background. Examples of buffware often feature bold and animated designs reflecting regional pre-Islamic folk traditions. Splashed ware was another technical development from this period, in which potters exploited the tendency of certain colors to run when fired in the kiln, using this quality to create dramatic splashed effects, sometimes similar in appearance to earlier Chinese ware of the Tang period (7th through 10th centuries).

In addition to Nishapur’s famous ceramics, the Medieval city is remembered as a sophisticated cultural center—education, the arts and sciences flourished from the 9th through 11th centuries—and Nishapur was home to many scientists, poets, and mystics, during this Golden Age of Islam. The poet and mathematician Omar Khayyám was born in Nishapur in 1048 and is buried a few miles outside the town. His tomb is still a major tourist attraction. About 25 miles from the city are the famous turquoise mines, which have supplied the world with Persian turquoise for thousands of years.

By the early 13th century, invasions and earthquakes brought about the decline of Nishapur. In a famous historical episode, Genghis Khan’s daughter, angry that her husband was killed by an archer from Nishapur, ordered the city slaughtered in 1221, and the skulls of men, women and children were heaped in pyramids by the invading Mongols. A series of earthquakes also damaged the city, destroying the pottery kilns. The tragedy of Nishapur’s decline ironically ensured that a great deal of the old city and its contents was preserved for archeologists to uncover.

Perhaps the closest the ceramists came to actual alchemy was in the mastery of the creation of lusterware. Creating lusterware required great control over kiln temperatures and timing. The object is fired once with an opaque white glaze and then this white body is painted with suspensions of metal oxides, often silver or copper, these glazes are fired at a lower temperature to create a thin metallic layer that adheres to the vessel. The resulting ceramics, with gold, bronze, and coppery iridescent touches were highly desirable throughout the Islamic world and in 15th century Europe. The technique migrated to Spain by the 13th century and continues to be practiced there. Henry Clay Frick owned a pair of 15th-century Spanish-made lusterware chargers, which were part of the collection kept at the family’s summer home on the north shore of Massachusetts. The chargers are now in the Frick's collection and will be on view during the ceramics exhibition.

Over the centuries, Persian potters, like their European counterparts, continued to try to replicate the fine white body of Chinese porcelains. Neither culture had success until the 18th and 19th centuries. However, by the 12th century the Persian ceramists had created their closest approximation yet, with fritware, probably developed in Kashan, a major pottery production center from the 12th to the 14th centuries. Fritware is made by adding ground quartz to fine white clay, along with potash (potassium carbonate made from soaking plant ashes) to create the white body. Glazes adhered better to the fritware body and clear glazes could be used over colors. Monochrome glazed fritware was often brilliantly colored green, cobalt blue, or turquoise—the most distinctive and memorable of the Persian glazes. The underglaze painted fritware made in the same period featured designs in turquoise, black, or cobalt painted under a translucent glaze. Cobalt is found in deposits near the city of Kashan, and it is believed that Kashan cobalt pots were the inspiration for China’s world famous blue and white porcelains, made with cobalt imported from the mines near Kashan.

The surface decoration of the pottery includes colorful abstractions and geometric patterns, arabesques and foliate patterns based on plant forms, and pieces both decorated with and depicting animals. An important contribution of Islamic design to the West was the creation of pieces with “all over” decoration , which display a strong sense of balance and control regardless of the density or complexity of the design. These motifs, not exclusive to pottery, were often incorporated into carpets, tiles, and other interior furnishings, and were a huge influence on 19thcentury artists and designers. 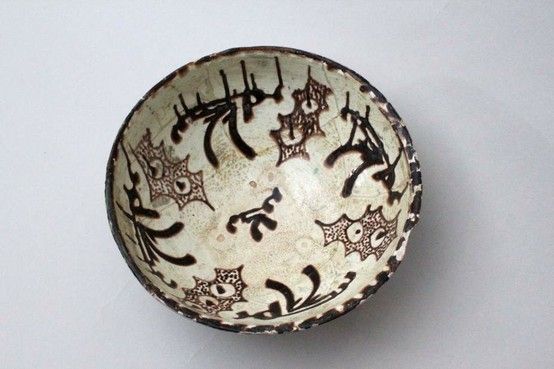