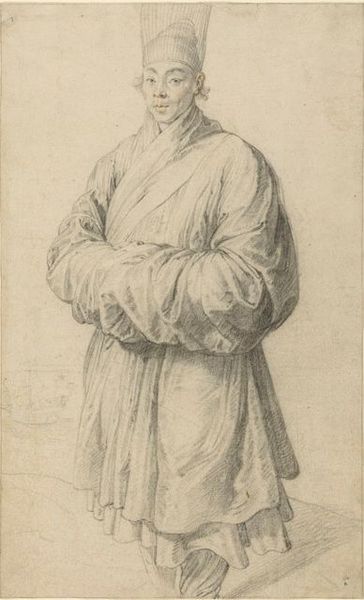 LOS ANGELES, CA.- Among the greatest of Old Master draughtsmen, Peter Paul Rubens (Flemish, 1577–1640) drew influence from an extraordinarily wide range of subject matter. Around 1617, he created a large-scale chalk drawing of a man wearing voluminous silk robes and a transparent headdress. This masterwork, now identified as a Man in Korean Costume, was acquired by the J. Paul Getty Museum in 1983. It is the centerpiece of an exhibition that provides the first in-depth study of this compelling drawing.

Since its creation, Rubens’s Man in Korean Costume has fascinated viewers. It was copied in the artist’s Antwerp studio and circulated as a reproductive print in the eighteenth century. Despite the drawing’s renown, why it was made and whether it actually portrays a specific individual are questions that remain unanswered. This intriguing work and the questions that surround it are the focal point of the exhibition Looking East: Rubens’s Encounter with Asia, on view March 5–June 9, 2013 at the Getty Museum.

Associate Curator Stephanie Schrader uses related drawings, prints, paintings, illustrated books, maps, and costume to demonstrate how trade and religion informed Rubens’s understanding of Asian culture. In addition to the Getty Museum’s famous drawing, and loans from the Getty Research Institute and other prominent national and international institutions, the exhibition also features five national treasures from Korea. These exceptional Korean loans, none of which have ever been shown on the West Coast, include portraits of Joseon dynasty scholars as well as luxurious costumes recently excavated from the sixteenth-century tomb of a prominent military officer.

“Man in Korean Costume is a powerful and intriguing work of art that prompts more questions than it answers. Past interpretations of it involve a remarkable blend of fact and fantasy about Rubens and his subject, which is now widely believed to be the first depiction of Korean costume in the West,” explains Timothy Potts, director of the J. Paul Getty Museum. “This exhibition offers many entirely new insights into one of Rubens’s most fascinating works, and in the process throws new light on the breadth of interests and ambition of this supreme artist.”

The subject of the Getty’s drawing is a man wearing voluminous silk robes and a transparent headdress that would have been made from horse hair. In the last few decades, Korean costume experts and historians have associated this attire with high-ranking officials in Joseon dynasty (1392–1910) Korea. Prior to this Korean identification, however, European artists, collectors, and scholars universally believed the drawing depicted a Siamese priest or ambassador who visited England. The identification is made all the more perplexing by the fact that the figure’s facial features, although vaguely Asian, are not definitively Korean.

As an artist and diplomat working for rulers in courts across Europe, Rubens frequently revealed his fascination with foreign costume and headdress. With Man in Korean Costume, he depicts the dress of an Asian kingdom that he never visited. During the 1600s, the distinct customs and costumes of Korea were virtually unknown in the West. Prior to the nineteenth century, what little information there was about Korea came to Europe through merchants and missionaries working in Japan and China. The exhibition includes the first Dutch map that correctly depicts Korea as a peninsula instead of showing it as “unknown territory” or an island above China. It also displays the earliest accounts of the kingdom in Dutch and Italian, demonstrating that Korea may have been less isolated than previously assumed. The exhibition suggests that luxury Korean goods, such as costumes and headdresses, may have made their way to Europe through missionaries working in China.

It is likely that Rubens was inspired to draw his Man in Korean Costume while working for the Jesuits in Antwerp, who in 1617 commissioned him to celebrate their missions in Asia. The Getty’s drawing has long been associated with a series of portraits by Rubens and his workshop depicting European missionaries who returned to Europe from China wearing luxurious Chinese costume. It also relates to a depiction of a pagan priest portrayed in a monumental altarpiece showing the Jesuit leader Francis Xavier (1506–1552) performing his miracles in Goa. In the exhibition, a display of Rubens’s drawings, prints, and the modello for the Francis Xavier altarpiece makes it clear that the artist used Asian costumes and headdresses to enliven his religious narratives and assert the victory of Catholicism overseas.

While Rubens was glorifying the success of the Jesuit missions in China and Goa, he apparently paused to consider the Asian “idolaters” on the other side of the globe: Who were these people the Jesuits were trying to convert to Catholicism and what did they look like? How did their attire differ from what the Jesuits themselves wore? Rubens’s imaginative turn seems to have been inspired by a firsthand encounter with never-before-seen Korean costume and headdress that Jesuit missionaries brought to Europe from China.

“Since we acquired this drawing, it has been the subject of great interest within the Korean community, both in Los Angeles and in Korea,” says Schrader. “The exhibition marks our effort to provide a perspective on Korean art, history, and culture as seen through the perceptive eye and skillful hand of a European master, Peter Paul Rubens. By bringing together works from two distinct cultures, we hope to take visitors on a cross-cultural encounter that they will find fascinating.”