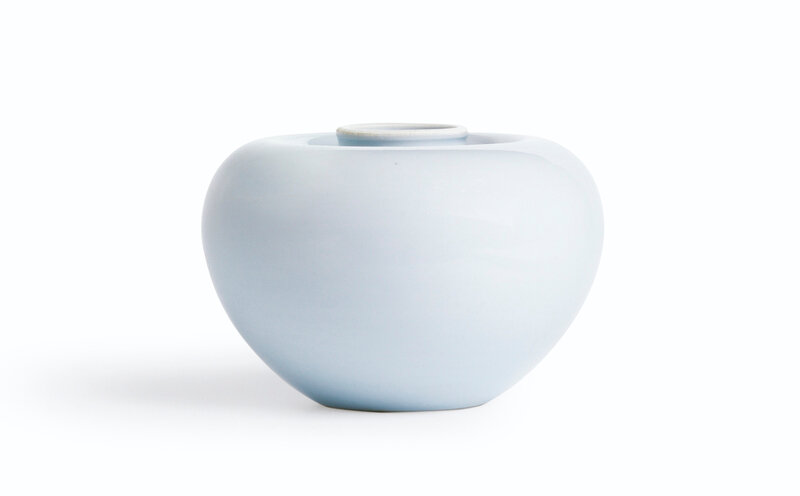 of compressed globular form, the tapering sides supported on a concave base, rising to a narrow waisted neck recessed into the shoulder and forming a deep channel around the rim, evenly applied on the exterior and on the interior with a flawless glaze of very pale caesious-blue colour, save for the rim and base left white, the latter inscribed in underglaze blue with a six-character reign mark arranged in three lines.

NOTE Vessels of this form and glaze colour, which in Chinese is referred to as ‘sky blue’ (tian lan), are rare, but four similar examples from the Widener collection, assembled in the 19th and early 20th century, are preserved in the National Gallery of Art, Washington, D.C., published in Virginia Bower et al., The Collections of the National Gallery of Art.Systematic Catalogue: Decorative Arts, part 2: Far Eastern Ceramics and Paintings; Persian and Indian Rugs and Carpets, Washington, D.C., 1998, pp. 93-7; one in the Shanghai Museum, is illustrated in Wang Qingzheng, ed., Kangxi Porcelain Wares from the Shanghai Museum Collection, Hong Kong, 1998, pl. 216; one in the Metropolitan Museum of Art, New York, in Suzanne G. Valenstein, A Handbook of Chinese Ceramics, New York, 1989, pl. 240; and one in the Baur Collection, Geneva, in John Ayers, Chinese Ceramics in the Baur Collection, Geneva, 1999, vol. 2, pl. 178.

This apple shape is also known from a single example with a copper-red ‘peachbloom’ glaze, in the Metropolitan Museum of Art, New York, from the Havemeyer collection, published in Valenstein, op.cit., pl. 238. The function of this form, which is generally considered to have served as a water vessel for the writing desk, is not known, since it would not be well suited for that purpose.